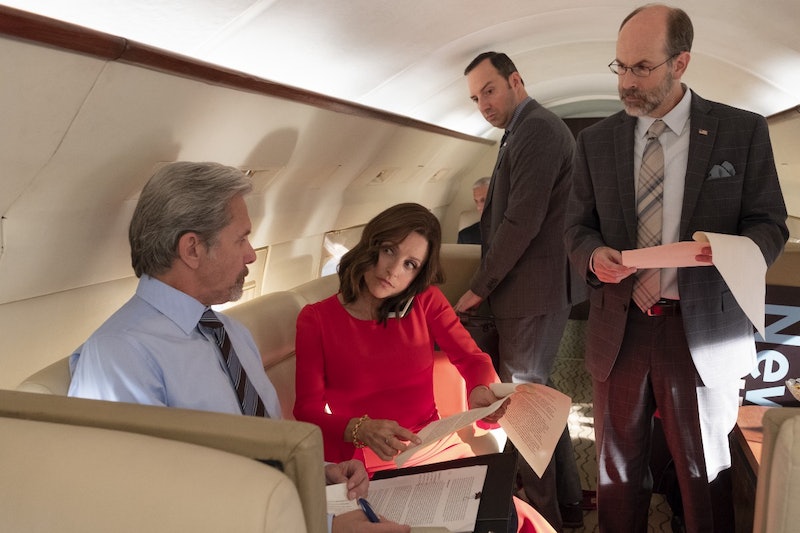 Political TV shows are typically one of two things: intense and melodramatic (Scandal, House of Cards) or authentic and moving (The West Wing, The Good Wife). And then there's Veep. The HBO comedy, now in its seventh and final season, is a hilarious send-up of American politics, featuring gloriously over-the-top characters who tend to attract absurdity. Yet satire is, of course, just an exaggeration of reality, so even Veep's most out-there shenanigans are often based on actual events, as showrunner David Mandel attests.

Mandel, a former TV writer for shows like Seinfeld and Saturday Night Live and the former executive producer of Curb Your Enthusiasm, took the reins at Veep in 2014 after previous showrunner/creator Armando Iannucci left. Along with the series' writers, he's worked to make sure that even a show as comedic as Veep still has roots in reality when it comes to politics, by reading up on foreign affairs, researching past presidents, and interviewing campaign workers, among other things. "We pride ourselves on our research," says Mandel. "We are thorough in our effort to make things seem real."

After all, while Selina Meyer and her team may be fairly inept, they're still running the country — there's gotta be at least some real-life inspiration behind their actions. Speaking to Bustle, Mandel walked us through how five of the series' most memorable political storylines came to be.

Warning: Some Veep Season 7 spoilers below.

In the Season 6 finale, Jonah — a.k.a., the grossly incompetent, horrifically arrogant former political adviser and Congressman — decides to run for president. Season 7 finds his campaign underway, but, unsurprisingly, it's filled with issues due to Jonah's tendency to insult or anger everyone he meets.

"Nothing [about Jonah] was based on any specific candidate, just on the general sense that the candidate pool sometimes seems quite shallow," says Mandel. The showrunner does note, however, that one Jonah storyline — women fervently denying they ever dated him — is reflective, if satirically, of a real-life movement.

"We are living in some interesting times— #metoo, etc," says Mandel. "But no, any similarities [to real people] are actually quite horrifying, to know that there are real people out there like Jonah."

In Season 6, Selina struggles to publish her memoir, both in the actual writing (she relies on Mike for help) and in its promotion (the book's debut unfortunately coincides with the release of an expose about the Meyer presidency). Sadly, A Woman First: First Woman receives scathing reviews.

"We read a lot of memoirs over the years, and even had one of [Bill] Clinton’s writers — professor and historian Ted Widmer — come into the office to talk with us about the process," recalls Mandel of the storyline's writing process.

The memoir may have failed with Selina's critics, but it was a hit with Veep fans; you can even buy a copy for real, thanks to its authors, Mandel and writer-producer Billy Kimball.

In Season 5, an accidental tweet sent by Selina leads her to place the blame on Chinese hackers and, subsequently, impose sanctions on China. In a deal with the country's president, Selina agrees to ease the sanctions if Tibet is freed. It happens — but minutes after Laura Montez is inaugurated, so it's Montez, not Selina, who gets the credit.

"We wrote the Chinese story years ago, and it started with the idea that Jimmy Carter had the Iranian Hostage crisis and that the hostages had been freed the day Reagan was inaugurated and he, not Carter, got the credit after all the Carter negotiations," says Mandel. "So I liked the idea of [Selina's] successor getting credit, as she was forced to watch President Montez take her job."

To portray the Tibet situation accurately, the Veep team also took to the books.

"We also did research on the various man-made islands that China was concerned with and their desire for natural resources, and all this went into that story line," says Mandel.

Also in Season 6, Selina tries to find a location for her presidential library, but there are numerous complications. including raising enough money, finding a location that'll accept her, and dealing with protesters after her ex, Andrew, has an affair with her presidential portraitist.

"We made a list of things former presidents do, and [building a] library is right up at the top," says Mandel. "I myself am a big presidential library fan. I have been to JFK's, Nixon's, Reagan's, and the FDR home in upstate New York."

The timeline of the library storyline — which aired in April 2017 — was perfectly planned.

"I was thinking about the fact that Obama would be leaving office and start planning his library," Mandel recalls of when he and the writers came up with the plot. "So I thought maybe there will be articles about it when Veep comes out, so people will know a little something."

In Season 7, Selina caucuses in Iowa as she begins her campaign to become president — again. Naturally, nothing goes as planned, starting with Selina's team arriving at the wrong airport and facing an empty tarmac rather than a crowd full of supporters.

"We brought campaign workers in who worked Iowa — including a bunch of the Pod Saves America folks like Jon Favreau and Tommy Vietor. They gave us great stories, like one about Obama landing at the wrong airport, which we used immediately," recalls Mandel. "We met with former Rep. Fred Grande, who is an Iowa native and filled us in on a lot of traditions. We spoke to people from the Iowa newspapers."

It's safe to say that the people behind Veep do a whole lot more work than the show's lovably blundering characters.

More like this
On 'The Handmaid’s Tale,' Christine Ko Fights Back
By Gretchen Smail
Jinkx Monsoon Is About To Get Real Sketchy
By Sam Ramsden
The New Bachelor Will Be Announced Next Week & Here Are The Top Contenders
By Grace Wehniainen
Two UK Cities Are Now In The Running To Host Eurovision 2023
By Sam Ramsden and Rachel Mantock
Get Even More From Bustle — Sign Up For The Newsletter