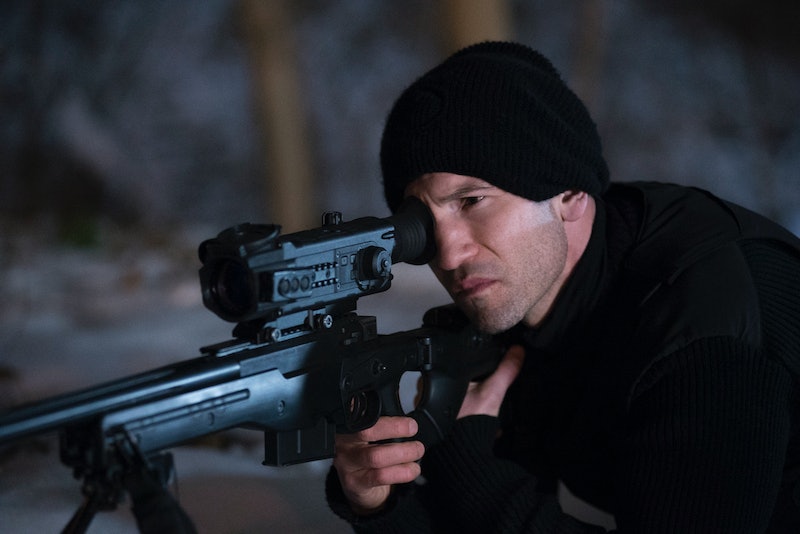 Frank Castle is called The Punisher for a reason. If Frank Castle has a problem with someone, they'll die a painful death. While fans of Netflix's Marvel Universe may be excited for a new show to binge, squeamish viewers, beware: The Punisher may be too violent for fans who have an aversion to bloody beatings and broken bones. Spoilers!

Anyone who saw Frank Castle's introduction to the Netflix-Marvel Universe in Daredevil Season 2 won't be surprised that Marvel's most brooding vigilante is prone to extreme violence. After losing his family and serving overseas, Frank Castle has enough trauma to last a multitude of lifetimes, and it seems his best method for dealing with his anger is to take it out on bad guys. While The Punisher's unflinching violence — particularly his affinity for guns — has always been a part of the character's appeal, recent real-life events have forced people to ask, "Is now really the best time for The Punisher?" When America is being subjected to acts of mass violence on a frequent basis, is The Punisher too violent to stomach?

There's no denying that The Punisher is the most violent entry into the Marvel Cinematic Universe yet. Compared to fellow Netflix programs like Daredevil and Jessica Jones and Marvel's mainstream movies, The Punisher packs in more blood and brutality than any of its Marvel brethren. The first episode alone features a man being shot in the head, another man being strangled, and a lot of blood; it ends in a bloody showdown that shows off a lot of creative ways that a sledgehammer can be used to injure people, before taking the action to a shootout that turns into a mass murder. There's a reason he's not called "The Cuddler."

The violence only gets more harrowing from there, involving scenes of torture and unflinching cruelty. Frank Castle is haunted by the death of his wife and children, a scene which Frank revisits in his head many times, and that the audience bears witness to time and time again. Frank Castle is a violent man in a violent world, but the relentlessness of the violence will be off-putting for Marvel fans who are more interested in how The Punisher fits into the larger universe.

Thankfully, the show is aware of its own hyperviolence – so much so that it canceled a planned screening at New York Comic-Con following the Las Vegas Shooting. "We put the premiere of this show off because of the tragedy that happened in Las Vegas. We did that out of respect. I think it was the right decision," star Jon Bernthal explained to Indiewire. To make matters worse, the tragedy in Vegas — which became the largest mass shooting in America — was followed a few weeks later by the fifth largest mass shooting in America. Given the prevalence of real-life violence in American culture, it's hard to watch the violence in The Punisher and not see the real-life parallels.

Spoilers through The Punisher Season 1. The violence just ramps up as the show continues. There are stabbings and bombings and a lot of hand-to-hand combat. In Episode 12, Frank gouges a man's eyes out with his bare hands. So yeah, the squeamish may want to sit this particular Marvel series out.

However, despite the extreme instances of violence in the show, The Punisher may serve more as an indictment of violence than a celebration. The Punisher follows the roots of peoples' violent actions, which is often caused by anger. The Punisher goes even further to explore that anger, and tries to determine the very roots of violence itself. While it may be hard to realize that when you're distracted by the buckets of blood that are spilled over the course of the show, The Punisher isn't always being violent for violence's sake. Still, no one will judge you if you need to cover your eyes during a fight scene.