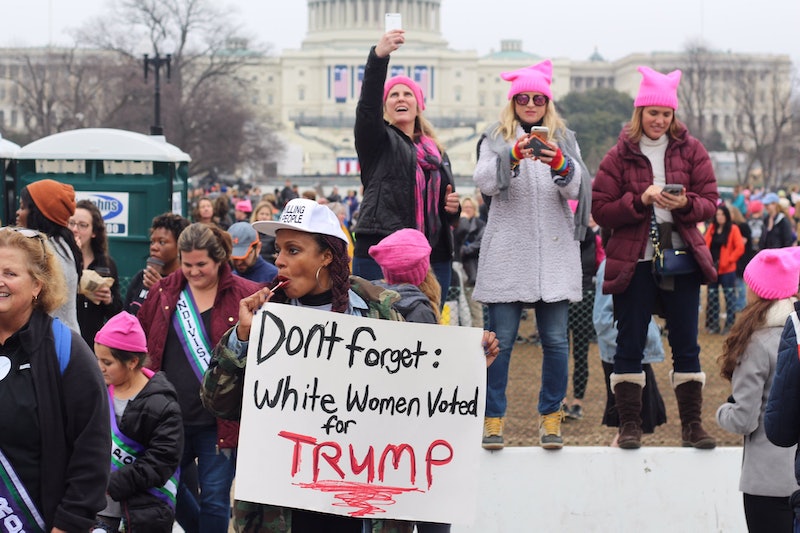 If you attended the Women's March in January, you might remember one protest sign from Washington, D.C., that made waves on social media. Held up casually by a black woman, the sign read: "Don't forget: White women voted for Trump." The same message seems relevant after 51 percent of white women voted conservatively in the 2017 Virginia race.

I'm really proud of black women who turned out in Virginia. I'm also not surprised, honestly, that we saw similar outcome in terms of white women turning out for Gillespie.

In contrast to the 51 percent of white women who supported Ed Gillespie, a whopping 91 percent of black women supported the ultimately victorious Democrat Ralph Northam. Angela Peoples, who worked for the voter mobilizing organization In Charge: Black Women Taking Action, was one of the key players in organizing black women voter participation in the state's gubernatorial race.

"I was on the ground for the last month or so working with black women leaders across the state of Virginia, trying to support them in doing work to mobilize their community," Peoples explains. "I'm really proud of black women who turned out in Virginia. I'm also not surprised, honestly, that we saw similar outcome in terms of white women turning out for Gillespie."

According to the exit poll data, Gillespie's social popularity among white Virginians was high. At least 63 percent of white men and 51 percent of white women came out to support the conservative who had tapped into local resentment toward African American football players taking the knee during the national anthem.

Black Virginians, on the other hand, were overwhelmingly in support of Northam. The data from Edison Media Research showed that 81 percent of black men and 91 percent of black women came out to support the Democratic gubernatorial candidate. The EMR exit poll data was sorted along the lines of family income, marital status, gender, race, education, religious affinities, and down to whether a voter had a gun-owning household member.

EMR's data set also suggests Northam owes a significant portion of his victory in Virginia to black women in particular. "I think it's important for Northam and Democrats across the country to really heed that [black women voters] are not just the loyal base that they can rely on [and] come to every couple of months. We're actually the base they need to be speaking to when it comes to policy," Peoples says. "We organize communities."

A sociologist's observations may explain why voting differed between white and black women in Virginia. To make sense of last night's turnout, Kelsy Kretschmer, an associate professor of sociology at Oregon State University, offers an explanation. "By lots of research, it's been pretty firmly established that there's a marriage gap. So we know that married women — particularly white married women — tend to be more conservative and so [they're] much more likely to vote in a conservative way," she says. "That was born out in the Virginia election."

However, the gap between progressive and conservative voters is deepened by race, according to Kretschmer. The professor says that the voting behavior of single and married black women is not influenced by marriage the way it seems for white women; her observation is corroborated by Katherine Tate, professor of political science at Brown University and author of From Protest to Politics: The New Black Voters in American Elections, who noted that black women tend to vote for the collective progression of society as a whole. Similarly, Kretschmer says "black women continue to see the well-being of women as really important to their vote choice."

It's worth noting that the data came from exit polls, which are often imperfect. However, they do show that race and gender remain key players in American elections. Perhaps the biggest takeaway from Tuesday night's intense governor race is that womanhood is not always a political unifier. Furthermore, progressive candidates will have to target demographic audiences in more complex and empathetic ways to fare well in the 2018 elections.

Peoples agrees: If the organizer had to re-create her famous January sign based on last night's governor race and white women turnout, she says she knows what she would write on it — "No, really, trust black women."

More like this
Prince William Condemns “Unacceptable” Comments Made To A Black Guest At Buckingham Palace
By Shahed Ezaydi
Melissa Barrera On Anxiety, Aloe Vera & Finding Self-Love
By Brittany Leitner
3 Afro-Indigenous TikTokers Share Their Most Meaningful Beauty Rituals
By Jada Jackson
Fans Are Calling For Kim Woodburn To “Return Her Gay Icon Card”
By Sam Ramsden
Get Even More From Bustle — Sign Up For The Newsletter