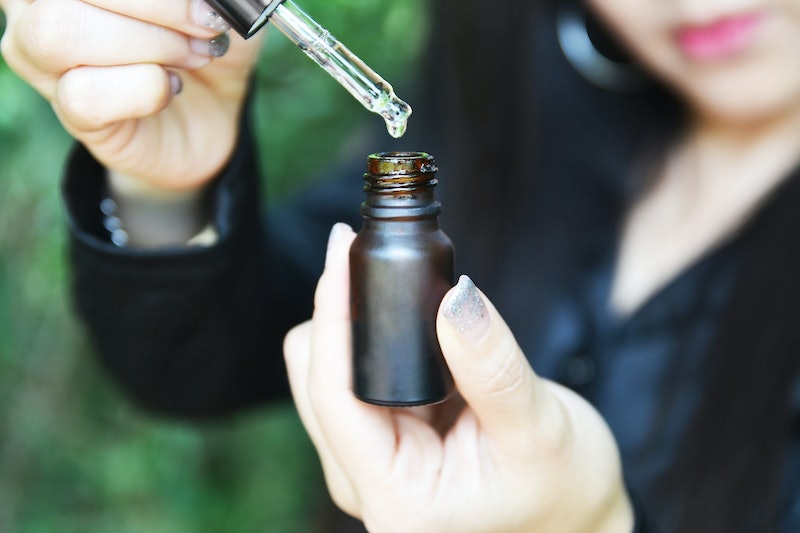 If you’ve listened to the raving testimonials from people who love CBD, the non-psychoactive cannabis compound, you may wonder whether you’ll immediately feel a difference the first time you take it. Those who use CBD claim it relieves anxiety, helps them sleep better, alleviates soreness, and leads to better overall physical health. But medical professionals say more research is needed before we actually know the effects of CBD.

You know how you might feel tipsy after drinking a glass of wine with a friend, while that friend feels just fine? The same principle applies here. Some people take CBD and find that they don’t feel anything, while others say they feel relaxed right away. The effects of CBD are less dramatic than those of alcohol or marijuana, so you won’t feel loopy or disoriented after taking it. In fact, you may not notice much at all.

But what else can you expect when taking CBD, and are there any negative side effects? Bustle talked to Capano, who has a doctoral degree in cannabinoid science, and Dr. J. H. Atkinson, MD, the co-director of the Center for Medicinal Cannabis Research at the University of California, San Diego, about CBD’s effects and potential benefits.

Remind Me — What Exactly Is CBD?

CBD stands for cannabidiol, and it’s a compound that comes from cannabis plants. CBD is often derived from hemp, which doesn’t have much tetrahydrocannabinol (THC), so CBD won’t get you high, according to Phys.org.

So Why Do People Take It?

The list of CBD’s purported health benefits is pretty long, but people most commonly use CBD to treat chronic pain, inflammation, and anxiety, according to Project CBD, a nonprofit cannabis news source.

While CBD is often marketed as the ultimate anxiety treatment, CBD companies avoid making specific claims so that they don’t get in trouble with the U.S. Food & Drug Administration (FDA), which approves products for safety and effectiveness. So far, the FDA has approved just one CBD drug, called Epidiolex, to treat two rare forms of childhood epilepsy. It recently announced plans to begin considering regulations for other CBD products.

Atkinson says there is some research showing that CBD can help with insomnia, but evidence is lacking for most of the other specific claims about it so far. However, there is some scientific backing for the benefits of CBD overall. Capano points out that you have something called an endocannabinoid system, which is made up of cell receptors throughout your central and peripheral nervous systems. Your body’s endocannabinoid system affects your pain response, inflammation levels, sleep cycle, and more. When you take CBD, it increases anandamide, which is an endocannabinoid that makes you feel blissful, according to Capano. This could improve your mood and inhibit pain, she says.

Which CBD Product Is Most Effective?

Atkinson says CBD’s bioavailability, or how much of it is actually absorbed into your circulatory system, depends on how you take it. CBD that you consume in food has a bioavailability of 5 percent, according to Atkinson. That means your body would only absorb 2.5 milligrams of CBD if you ate a brownie containing 50 milligrams of it, and it would take some time for you to feel anything.

Atkinson says it usually takes about an hour for your body to absorb CBD, though it may vary depending on the form in which you take it. He points out that CBD vape products have the highest bioavailability, and any effects when it’s consumed that way are usually felt within 10 minutes.

CBD won’t fix all of your health problems, but there is evidence that you’ll at least feel something, as Capano puts it. Ultimately, more research needs to be done before scientific conclusions about CBD’s effectiveness can be drawn.