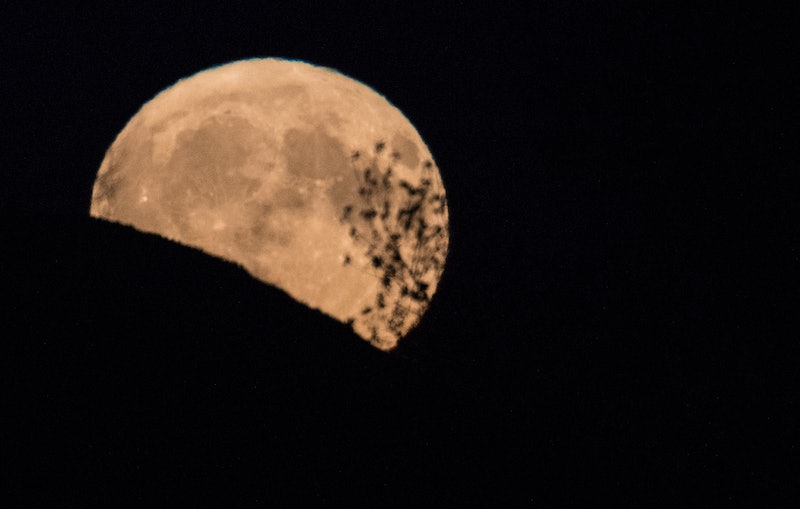 Ready or not, summer is winding down and fall is literally right around the corner. And as we head towards the Autumn Equinox on Sept. 22 — the official first day of fall — the September 2018 Harvest Moon is set to rise on Sept. 24 at 10:52 pm, EDT, according to The Old Farmer’s Almanac. And while astrological predictions about the significance of this year’s Harvest Moon abound, you might not know that the Harvest Moon 2018 may also have some significant effects on your sleep.

SleepScore Labs advisory board member,Dr. Nate Watson, tells Bustle via email that increased light at night during a full moon can "interfere with sleep by increasing the time it takes to fall asleep, decreasing how long people sleep, and reducing sleep quality." Dr. Watson also says that "A full moon may even reduce the amount of N3 sleep, widely considered to be the sleep stage most important to rejuvenating the body."

According to LiveScience, research now shows what folklore has affirmed for ages — the full moon can actually mess with your sleep. During a small, four-year sleep study published in the journal Current Biology, researchers tracked brain activity, hormone levels, and eye movements of 33 participants in a lab setting. They found that during the time of the full moon, brain activity signaling deep sleep dropped by a full 30 percent, even though all study subjects were healthy, took no recreational drugs or prescribed medication, and were normally sound sleepers, LiveScience reports.

Moreover, researchers found that the full moon had these effects on sleep even when study participants didn’t track the lunar cycle or have any idea what the moon phase actually was. Study author and sleep researcher Christian Cajochen of the Psychiatric Hospital of the University of Basel in Switzerland told LiveScience that, according to these findings, “the lunar cycle seems to influence human sleep, even when one does not see the moon and is not aware of the actual moon phase."

TIME also reports that, while further research examining sleep data for every night in the lunar cycle (not just the full moon) might shed more light on exactly how the moon affects our sleep patterns, the University of Basel study does suggest that the effects of the full moon on our circadian sleep cycles might be significant. On average, participants took five minutes longer to fall asleep and slept for 20 fewer minutes during the full moon than they did normally. Also, melatonin (the hormone that regulates sleep) levels were lower, and participants reported less refreshing sleep during the full moon than at other times.

So, what can you expect sleep wise during this September's Harvest Moon? Astrologer Marlena Marie tells Bustle via email that this harvest moon is in Aries, a fire sign. "Whenever the moon moves through a fire sign, we are more outward with our emotions, more reactive than usual, or more outspoken about how we feel." And since Aries is a high energy sign, according to Marlena, this full moon might mean that it's "a night where we don't sleep as much, or [we] feel less concerned about sleep than usual."

Marlena recommends a good workout to burn off excess energy during the day of the full moon, to help promote better sleep that night. She also suggests that we "keep in mind that many people have trouble sleeping during full moons anyway, but especially if you have any Aries, Cancer, Libra, or Capricorn planets between 1 to 5 degrees, you may find that this full moon has a stronger effect on you than most." Sleep well, my friendlies.