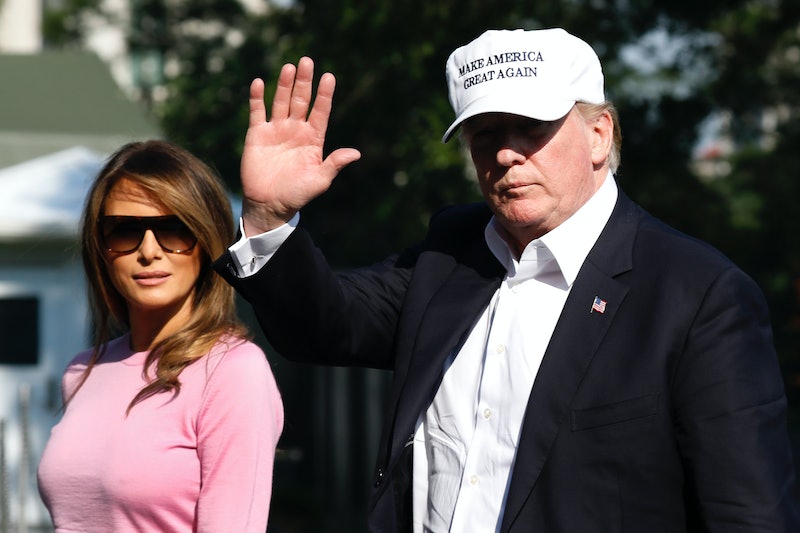 President Trump doesn't plan to follow in his predecessors' footsteps when it comes to Independence Day celebrations. Trump's Fourth of July plans involve a picnic and firework display that will be broadcast across the nation, but there's a key difference between those festivities and what former Presidents Barack Obama and George W. Bush did to mark the Fourth of July while honoring America's diversity.

“I’m delighted to welcome this new addition to the annual White House July 4th celebration,” First Lady Melania Trump said in a statement referencing the White House festivities. “Americans will be able to tune in from their homes and be part of the festivities. Thank you to the National Park Service, the National Park Foundation, and the event sponsors for helping make this possible.”

Like Trump, previous presidents have hosted a picnic for military families on Independence Day. But Barack Obama's barbecue followed a naturalization ceremony for members of the military who'd received their citizenship after years of service; George W. Bush also celebrated the Fourth of July by swearing in new U.S. citizens.

“Some of the servicemembers coming this year are unique because they signed up to serve, to sacrifice, potentially to give their lives for the security of this country even though they weren’t yet Americans,” Obama said in 2014. "That’s how much they love this country. They were prepared to fight and die for an America they did not yet fully belong to. I think they’ve earned their stripes in more ways than one."

President Trump doesn't plan to host a similar ceremony. In light of his "zero tolerance" immigration policy, thousands of migrant children remain separated from their parents after they were caught illegally crossing the United States' southern border. Although the president issued an executive order that he claimed would end that practice, the White House has not released a detailed plan for reuniting those families who've already been separated.

Democrats will likely use Independence Day as an opportunity to call out the administration's immigration agenda, and Sen. Ron Wyden (D-OR) urged Americans to protest on the Fourth of July. "This is Fourth of July week and I'm calling it 'First Amendment Fourth' where we can get out and talk about families and where they belong," he told the crowd at a Portland Families Belong Together rally over the weekend.

Trump stood by his stance that immigrants are bringing crime and violence into the country on Tuesday, tweeting: "When we have an 'infestation' of MS-13 GANGS in certain parts of our country, who do we send to get them out? ICE! They are tougher and smarter than these rough criminal elelments that bad immigration laws allow into our country."

In lieu of the Independence Day naturalization ceremony that's become tradition in recent years, military families are expected to join the president and first lady on the South Lawn for an afternoon picnic followed by a firework display that will be put on by the National Park Service, according to a White House statement. People across the nation can tune into the 90-minute evening event on the Hallmark Channel starting at 8 p.m. ET. It will include live performances from singer Sara Evans, pianist Lola Astanova, American Idol finalists Jax and Jonny Brenns, the United States Marines band, the United States Navy band, and the United States Air Force band.

At the same time, the president's re-election committee will be having a celebration of its own — with a huge sale on Trump-Pence merchandise. The Trump Make America Great Again Committee will be offering 40 percent off of swimsuits, beach towels, hats, and coffee mugs inscribed with the president's campaign slogan, as TMZ pointed out. The promo code for the sale is "FREEDOM" (which inevitably led to tweets joking that the code should have been "COLLUSION" or "TRAITORS").

Regardless, the president will spend the holiday at the White House with military families from across the nation, eating barbecue and marveling at fireworks.