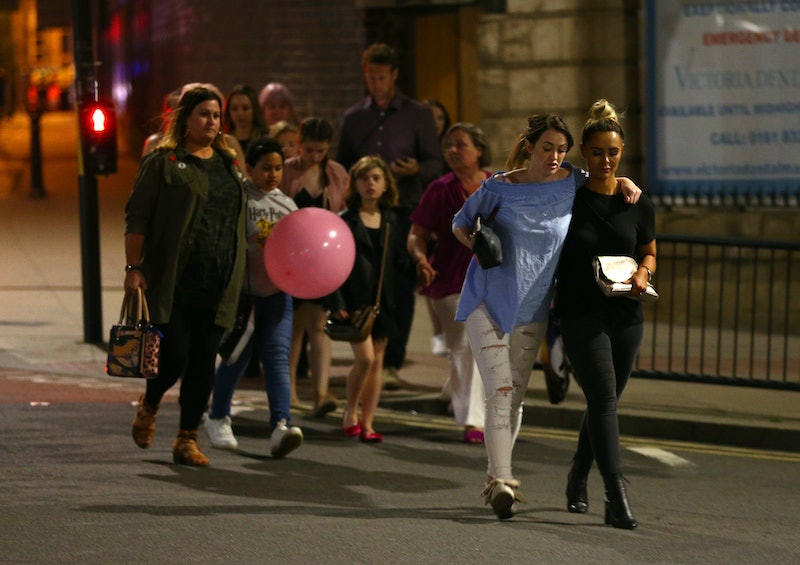 After reports of an explosion at an Ariana Grande concert on Monday that left many people dead and injured, friends and family of concert-goers are still having trouble locating their loved ones in the area in all chaos. For those wondering how to help find people at the Ariana Grande concert, taking to Twitter might be a good place to start — particularly by getting the word out about the people who haven't been found yet and the places nearby where they can find help.

As more details emerged on exactly what occurred, the fact that the concert was one heavily attended by younger fans — many of whom haven't been able to meet up with their guardians or catch their trains home — has quickly become a focal point for "the helpers" on the scene and off.

Along with the hashtag #RoomForManchester full of locals offering shelter and comfort to those stranded in the area, several reports have also identified that the nearby Holiday Inn (+44 0161 836 9600) and Premier Inn (+44 0871 527 8744) have each taken in 50 to 60 children who were separated from their guardians and are directing people to their phone lines to try and reconnect them with their loved ones.

Additionally, there are a lot of names and photos going around on Twitter of people who are still considered missing or haven't made contact with their friends or families following the incident.

Local outlets like the Manchester Evening News, as well as journalists on Twitter, have kicked-off the process of compiling a thread of people reported missing in the area and determining who has been located. But it should also be noted that one should always be cautious sharing posts of this nature, despite the frantic atmosphere — there have already been a few widely shared collages and posts that remain unverified, or contain some inaccurate or potentially faked information.

It's an obvious rule of the Internet to be mindful of the sources you're retweeting or sharing (whether it's helper links or news reports) — but it's even more essential in times of emergency when passing along accurate information with large groups of people in distress.

Look out for the posts already shared by news outlets and organizations you trust and try to signal boost those; if something seems sensational or unbelievable, err on the side of caution to avoid passing along or hyping up false information.

While it's a scary time for the people looking for their friends and families in Manchester, people around the globe should absolutely keep level heads, employ some good news judgement, and use whatever platforms they have at their disposal to help.