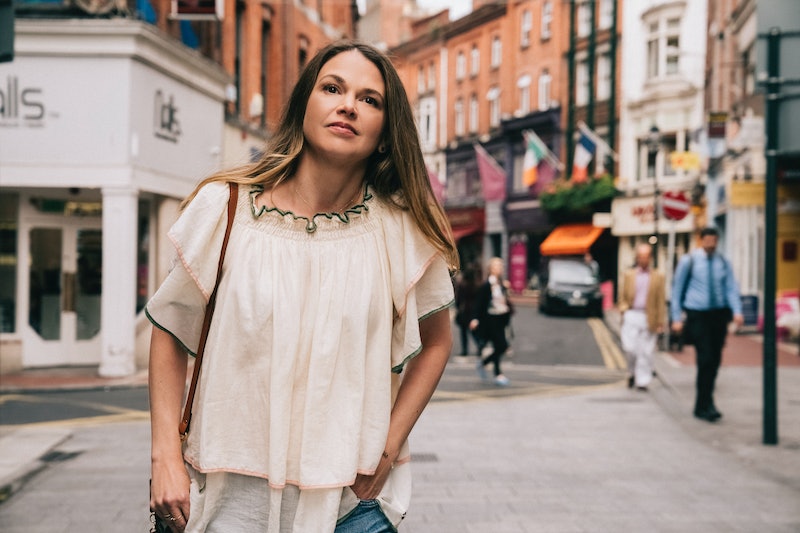 Three years ago, Younger debuted its series premiere with a clever twist on the old rom-com trope: Liza (Sutton Foster), struggling to re-enter the workforce as a 40-year-old divorced mom, lies about her age to get hired as a twenty-something assistant at a book publishing company. Hijinks obviously ensue, but it's not long before she starts to really fall for her boss Charles (Peter Hermann) — and the feelings are mutual, although he has no idea his age-inappropriate intern is actually his peer, making their flirtation-turned-almost-affair more appropriate than he realizes. Despite Liza's much-younger boyfriend (at the time) Josh (Nico Tortorella) and the Team Josh vs. Team Charles debate that waged on for the first three seasons, it slowly has become clear that Charles and Liza are meant to be. Fans root for them relentlessly despite the would-be couple only sharing a few stolen kisses and hot make-out sessions here and there, and the Season 4 finale seemed to indicate that in Younger Season 5, Charles and Liza would finally get together for real.

But times are changing drastically (sometimes faster than pop culture can even keep up with). In the wrong hands, what seemed like a quirky twist five seasons ago gets murkier in the current climate. Thankfully, Younger manages to ask — and definitively answer — any complicated questions raised about the relationship at the center of the series in the wake of #MeToo and is all the better for it. And bonus: the TV Land comedy does it all in the Season 5 premiere alone.

In an impressive episode (airing Tuesday, June 5 at 10 p.m.) that focuses solely on sexual harassment in the workplace through problematic Empirical author Edward L.L. Moore (Richard Masur), Younger doesn't hesitate to turn the spotlight onto Liza and Charles' relationship. Through the lens of sexual harassment in the workplace, a boss engaging in any kind of sexual behavior with his much younger employee is crossing a very clear line. Charles knows this. Liza knows this. Of course, there are much more complicated circumstances in play for them, but having a romantic comedy with a large ensemble cast and extremely limited time actually take a pause to confront this tricky relationship dynamic is a bold move that pays off. The way that both Charles and Liza handle an important and sensitive matter in a frank, honest, and real conversation elevates the critical darling into must-see TV, not only for the #MeToo era but for anyone at any time.

In a stroke of luck, the series had time to figure out how to address sexual harassment in the workplace because the onset of the #MeToo and Time's Up movements happened right before the start of production on Season 5. Foster tells Bustle that those movements "absolutely" affected the direction of the new season.

"I remember talking to [showrunner] Darren Star about it when we were heading into the fifth season," she says. "He told me that we're going after L.L. Moore with sexual harassment. As writers, back in Season 2 when we had the whole first Princess Pampam stuff with L.L. Moore, when they originally wrote that it was fun and he was just this dirty old man. And then they had, as writers, had to look back and realize that this wasn't right. Season 5 faces that head-on."

While the George R.R. Martin-parody character is the one getting accused of sexual harassment by not just Liza but all the other Princess Pampams he's harassed before, this storyline affects almost every single character in surprising ways. From Liza to Charles to Diana (Miriam Shor), the scandal shakes up Empirical in ways viewers won't see coming. But the twist was necessary for the series to move forward in this new era.

"I think our writers have always been so clever about intertwining current events with our show," star Hilary Duff, who plays Kelsey, tells Bustle. "It's obviously such an important matter to touch on and acknowledge but the way that last season ended, we had the perfect set up for it with the way that Edward L.L. Moore always was with Liza and other people. He was always a creep."

Getting to address such a prescient issue head-on felt "amazing" to Foster, but she argues that it's nothing new for Younger.

"Our show deals with a lot of present issues from when we first premiered — ageism, gender-bending stuff, a lot of things that are going on right now and conversations that are happening," she says. "I felt really proud to be a part of a show that took a stance on that. I'm so proud of the show for many reasons but being able to use what's happening in the world and being able to incorporate it on a TV show and bring humor and light and awareness is great."

Despite the newfound prevalence of talking openly about sexual harassment and assault thanks to the #MeToo and Time's Up movements, all women know that this isn't exactly a new issue. "This has been such a big story to uncover, because this has been going on for such a long time," Duff says. "So it's been really nice to address it. It's not just in the workplace, though. It's everywhere. It affects everyone. It's time for it to end. It's so inappropriate and it's so nice that a light is being shone on all of these people that have been inappropriate."

Younger has always portrayed Liza and Charles' flirtation through a romantic lens, but in the aftermath of #MeToo, it's not wrong to look back and question the appropriateness of Charles and Liza's relationship. Even Foster herself "had a moment" of doubt recently about rooting for them to get together.

"I never thought of it that way because I always thought of them as this inevitable love affair," she says. "I never thought of it as the power dynamic of boss and employee and all of these things. I remember when he kisses me for the very first time in Season 2 at the end and I end up coming back to work for him. Someone brought it up to me and they were like, 'Your boss just came to your new place of employment, kisses you and then you come back to work for him.' I was like, 'Oh … yeah.' But I wasn't working for him at the time when he kisses me!"

She pauses to laugh, then continues, "It's definitely something that we look at as a show and something that is part of the season this year is what that work relationship is, what it looks like, what is appropriate, what isn't, what works, what doesn't. We don't shy away from any of that."

After some introspection, Foster eventually came to the conclusion that whatever is happening between Liza and Charles, while tricky, is not inappropriate, and fans shouldn't feel weird about rooting for them.

"If she were trying to use Charles to get ahead, or if he was trying to use his power over her, then the dynamics are different," Foster says. "But I don't feel that way about Charles and Liza."

If Liza really were a twenty-something being pursued by her older boss like Charles believes, does that change things? "As far as the age goes, that hasn't come into play yet in their relationship. Or at least, that's what I think," Foster adds. "But maybe that's because I root for them. I don't want to be full of excuses like, 'But they're different!' But what I am proud of is that the show doesn't let that off the hook. It's not like we make exceptions for them because, 'They're in love!' I do think they are in love with each other, but all of those things have to come into play."

And while the way the premiere episode handles such an important and sensitive topic is heavy, don't worry: Younger isn't turning into an intense drama. Duff promises that after the premiere, things go back to your regularly scheduled relationship drama, workplace intrigue, and Liza hiding her real age from everyone she knows.

"It's nice to tackle serious subject matters, but we are a comedy and we tend to do things in a little more light-hearted way," Duff adds. "The show definitely moves on to different stuff. One of the big topics this year is the truth, telling the truth, and if the truth really matters." Now that's an issue that will really hit home for Liza — could this be the season where her secret finally gets out? We'll find out soon enough.