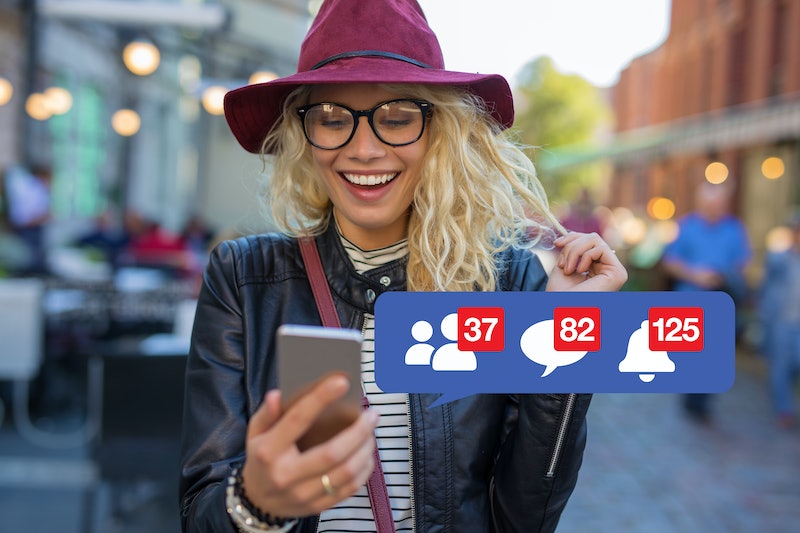 Facebook is considering getting rid of one of its most well-known features — and this move could totally change the way you engage with social media. Recently, news emerged that the company might be removing public "like" counts from people's posts, possibly in a bid to help prevent users from feeling stressed about the number of likes they get. As experts attest, getting a "like" online triggers a certain response in your brain — and it's pretty powerful.

Facebook might start testing like count removal, it confirmed to TechCrunch on Sept. 2, and if that actually happens, you could be less tempted to check social media multiple times per day. Part of that pressure has to do with the fact that your brain's response to getting likes is centered on its reward system. In 2017, Dr. Tara Emrani, a psychologist at NYU Langone Health, told Fox News that getting a like or comment on Facebook triggers your brain's reward system and causes your brain to release dopamine. As Psychology Today noted, dopamine gives you feelings of satisfaction and pleasure, though it can also play a role in addiction in some cases.

"When someone gets a like on social media, it activates the reward system of their brain. This is just a network of brain regions that essentially assess value and helps you make value-based decisions," Dr. Dar Meshi, Ph.D., a faculty member in the neuroscience program at Michigan State University, tells Bustle. "So, when you win money, eat food, or exercise or when you get social rewards — like someone saying you're an honest person and you value being honest — this system in your brain activates."

In addition, Dr. Mark Griffiths, Ph.D., a professor at Nottingham Trent University who researches behavioral addiction, says the like button encourages people to repeatedly check Facebook. "A key ingredient that facilitates habitual social media use is the ‘like’ button," Griffiths tells Bustle. "This simple characteristic has reaped huge rewards in terms of users repeatedly coming back to check their social media platforms, and what some psychologists like myself have described as a ‘craving for validation.'"

Similarly, Psychologist Emma Kenny told Cosmopolitan that a like count can be damaging if you start to equate the number of likes you get with your own self-esteem and confidence. “If you believe that other people’s opinions are facts, your esteem will be low, your confidence will be terrible and you’ll constantly seek approval," Kenny said to the magazine. "If you’re somebody who deletes posts because they’re not getting the reinforcement, that plays into all of those negatives."

While Meshi, from Michigan State University, stresses that he isn't aware of any studies that have specifically examined the implications of having publicly-viewable Facebook likes versus private ones, he stresses that there is research demonstrating that "the more something's been liked, the more likely you are to like it."

In fact, Dr. Lauren Sherman, a former developmental psychology professor and postdoctoral fellow who's currently a UX researcher at Facebook, conducted research at UCLA in 2016 that reflected these findings. In our study, “we showed the exact same photo with a lot of likes to half of the teens and to the other half with just a few likes,” she said in a UCLA press release. “When they saw a photo with more likes, they were significantly more likely to like it themselves. Teens react differently to information when they believe it has been endorsed by many or few of their peers, even if these peers are strangers.”

To sum it up, having publicly-viewable like counts is tied to how frequently users like other people's posts — and the more likes other people get, the more their brain's reward system is activated. If Facebook does decide to move forward with eliminating like counts, it's certainly possible that this could affect how people use and respond to social media in the future.