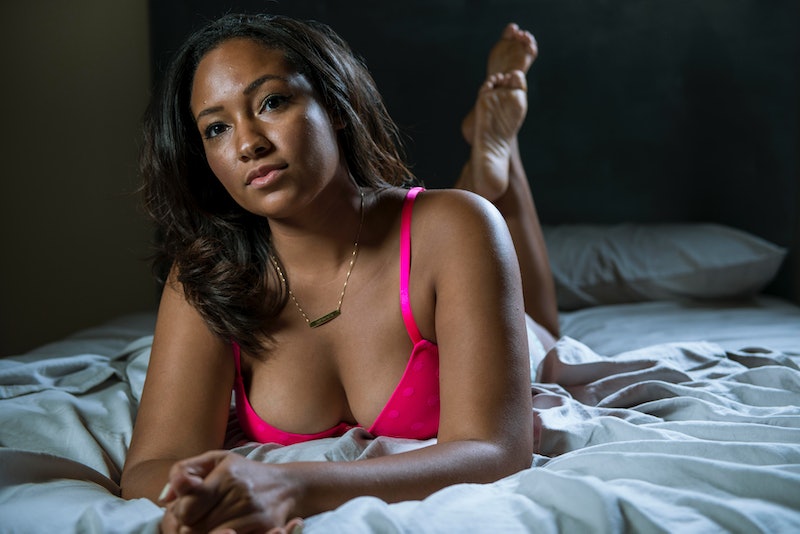 When I was a teenager, I thought you could get pregnant any time you had sex. That’s basically what we’re taught in sex ed, right? That any time sperm gets anywhere near your vagina, you’re at risk of pregnancy. Beware of pre-cum! Don’t even rub up on each other! Put a condom on as soon as he gets hard! Those were the messages I absorbed as a sexually active, aware teenager who knew that she couldn’t get pregnant before she was ready. However, as an adult, and now as a sex educator, I know that your chances of getting pregnant change a lot throughout your menstrual cycle.

“The best time to get pregnant is when you’re ovulating, which commonly occurs around day 13 to 14 (give or take a day or two) since your last menstrual period,” Dr. Susie Gronski, DPT, PRPC, tells Bustle. “Your body temperature also increases about one degree around ovulation. The ovulation period can be unpredictable and varies between all women, so it’s best to follow your own individual menstrual trends and patterns.”

So midway through your cycle is the time you’re most likely to get pregnant — but what about the other parts of the month? Are we really only fertile for two days of a 28 to 36 day cycle? Not exactly — but also yes, kind of. Let me explain. (Also important to note, this only applies to people who aren’t on hormonal birth control, which disrupts your natural cycles and prevents ovulation.)

The first day of your period is considered the first day of your cycle, so all counting should start there. During your period, it’s extremely unlikely that you’ll be able to get pregnant — but it is technically possible. Your period is your body shedding the lining of your uterus and the unfertilized egg in preparation for your next cycle and egg, so it’s really not a hospitable environment for a pregnancy.

However, sperm can live in the vaginal canal for up to 72 hours, so if you have unprotected sex at the end of your period and then have an early ovulation, you could theoretically get pregnant. Another possibility is that you could confuse vaginal bleeding due to ovulation with your period and have unprotected sex. If that happens, you’re at a really high risk of pregnancy because ovulation is those two days when you’re super fertile.

From about day seven to day 11 of your cycle (assuming your cycle is 28 days), your body is developing and releasing an egg.

On day 12 of your cycle, your estrogen levels are super high, your cervical mucous is stretchy, and you’re about to be fertile. Because sperm can live for up to 72 hours in the body, you’re at risk of getting pregnant as early as day 12, even though you haven’t ovulated yet. On day 14, that little egg releases from the follicle and you’re at peak fertility. This is the day you should be extra cautious with protection. (Or, if you’re trying to get pregnant, throw those condoms out the window.)

Once you’ve ovulated, there’s about 24 hours in which the egg will hang out. If it’s not fertilized, it will die at the end of that time period. However, you can’t always know exactly when you’ve ovulated, so it’s a good idea to assume you’re fertile until day 17 of your cycle. After that point, you’re more likely in the clear.

Once you’re past day 17, it’s unlikely that the egg is still alive. However, it is important to note that if you have a longer cycle or if you have an irregular cycle, you might ovulate later than other women do. In general, if you’re trying not to get pregnant it’s still a good idea to be cautious during this post-ovulation, pre-PMS days.

My mom always says that PMS is your body’s way of forcing you to deal with any emotional stuff you’ve suppressed during the month. From day 23 to day 27, don’t be surprised if you’re feeling moody, irritable, and bloated. Day 23 is particularly hard, day 25 will probably be worst for bloating, and day 26 is for pre-menstrual fluid retention. (Yay!) But by day 27, your PMS should be winding down and by day 28, you should expect your period.

One plus side of all these hormonal ups and downs if you're not trying to get pregnant? It’s unlikely that you’ll get pregnant during this time. The chances of an egg hanging out in your uterus still are very slim and it’s also highly unlikely that you’ll ovulate within 72 hours of any day during this time period, so you don’t have to worry about sperm that’s hanging out for a while.

So, despite what I — and maybe you — learned in high school sex ed, you’re not likely to get pregnant every time you have sex. There’s really a five day period in the middle of your cycle when you should be extra cautious (or have a lot of unprotected sex, if pregnancy is your goal), but outside of that? It’s unlikely. Good to know, isn’t it?

More like this
Are Virgo & Aquarius Compatible In A Relationship?
By Kristine Fellizar
How Do I Deal With Both ED & Premature Ejaculation?
By Sophia Benoit
Why Experts Say Sleeping With A Fan On Isn’t Totally Risk-Free
By Sophie McEvoy
Hinge's New NFAQ Feature Is Demystifying Queer Dating
By Emma Carey
Get Even More From Bustle — Sign Up For The Newsletter