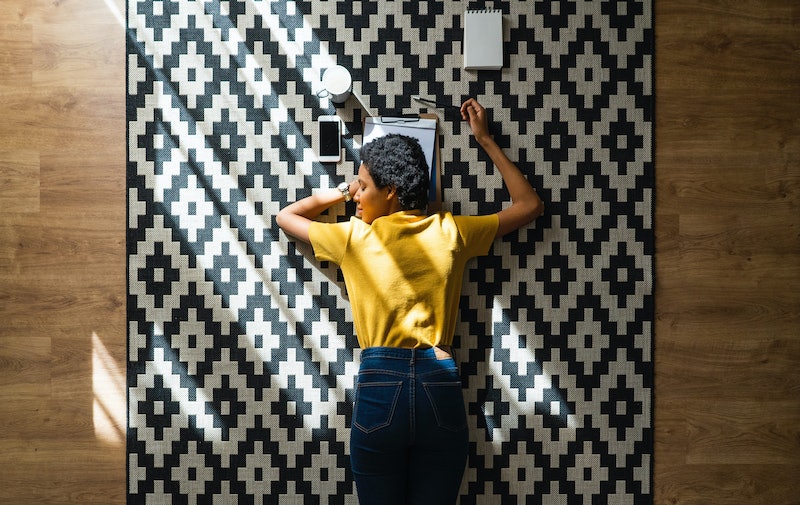 If you've ever gone through depression you know it can affect many different parts of our bodies, from our energy levels to how well our brains function. It has such far-reaching effects that depression can even have an impact on our dreaming. Research has revealed that for many people, rapid eye movement (REM) sleep, the period in which we dream, has mood-regulating effects; people often feel better the morning after a traumatic or upsetting event if we've had sufficient REM sleep to process it. For people with depression, however, that healing element is absent — and studies have shown that there's a relationship between depression and bad dreams.

The connection between depression and nightmares appears to be complex. If you have depression, you're more likely to have bad dreams, and having nightmares are also a strong predictor of depressive symptoms. A study of nightmares in the Finnish population published in Sleep in 2015 (and led by the appropriately named Dr. Nils Sandman) found that people with depression, insomnia or exhaustion were the most likely to experience nightmares. Research by Dr. Rosalind Cartwright, Ph.D., an expert on dreaming and depression, found that people experiencing painful divorces tended to have bad dreams featuring their ex-spouses in punishing or negative roles, while those who were coping better with divorce tended to dream of their exes in more distant, unemotional ways.

However, scientists are still figuring out how the link between depression and dreaming works. Studies of the brains of people with depression have shown that the dark dreams accompanying depression may be the brain's attempt to work through negative feelings and triggers from their daytime experience. A study on firefighters published in Journal of Clinical Sleep Medicine in 2016 found that nightmares and disturbed sleep might increase depression because they can affect our waking ability to regulate our feelings and solve emotional problems.

The influence of depression on dreams is also influenced by anti-depressants. Selective serotonin re-uptake inhibitors (SSRIS) are commonly prescribed to people with depressive symptoms, but Dr. Michael Breus Ph.D., a sleep expert, tells Bustle that they can also influence dream content. SSRIs can make us less capable of remembering dreams and possibly increase the positive emotional content of dreams, but withdrawal from SSRIs might increase nightmares.

For people who have depression related to post-traumatic stress disorder (PTSD), studies show they'll likely experience recurring nightmares — but they'll be of a different kind to depressive nightmares. Sleep scientist Matthew Walker, Ph.D., writes in Why We Sleep that REM sleep tends to be a safe place for emotional playback for many people because it coincides with a shutdown in noradrenaline, a neurotransmitter related to fear that regulates the fight-or-flight response. The absence of noradrenaline in the brain means that memories don't have a lot of emotional "punch" during dreams, so we can contemplate them without getting too upset.

Depression and bad dreams are intrinsically linked — but Cartwright's research found that increased REM sleep appears to help people with undiagnosed depression experienced reduced symptoms. If you're seeking treatment for depression, it might be a good idea to take note of your dreams and how they affect you; they may be more interconnected than you'd think.