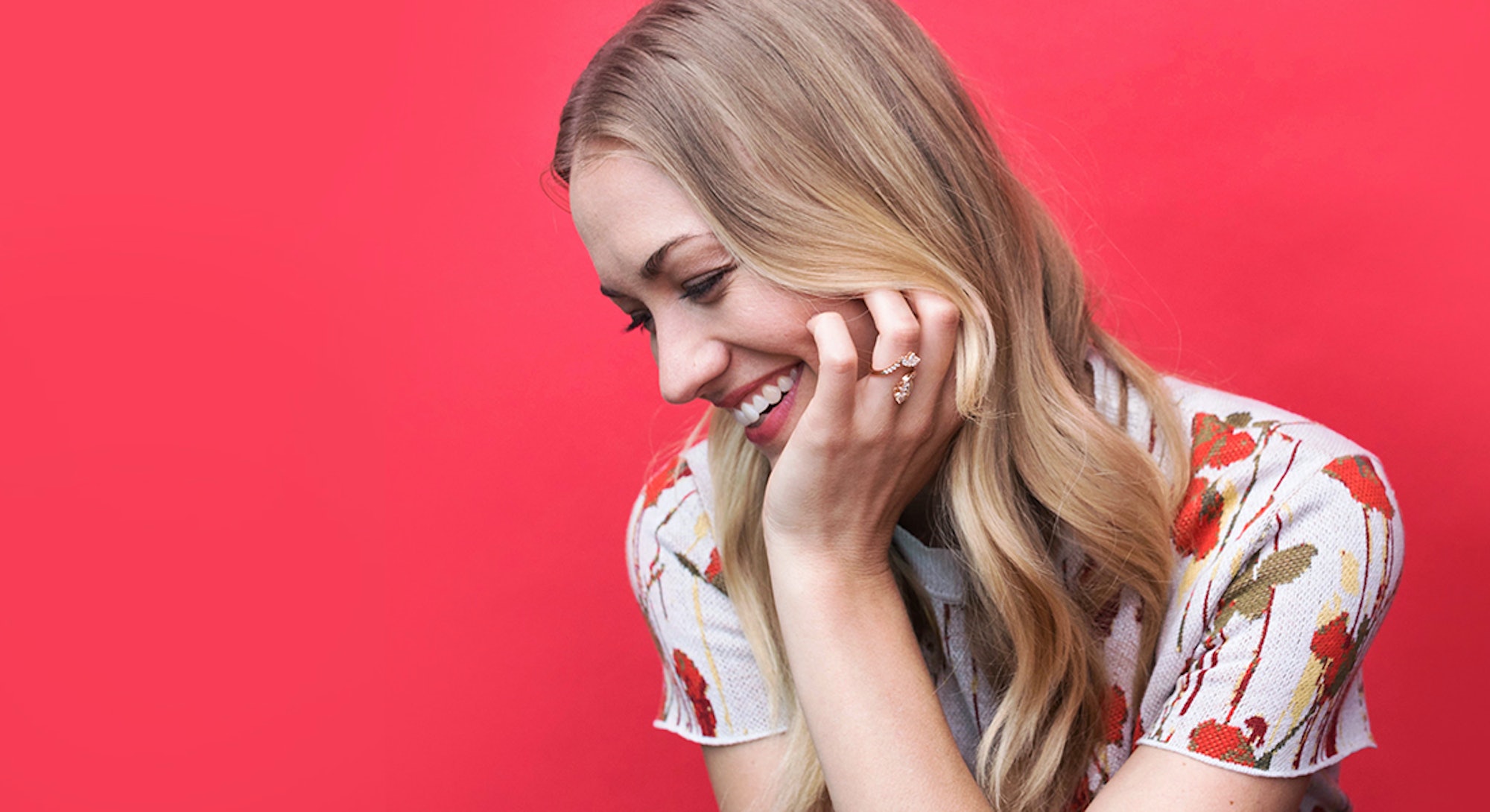 Yvonne Strahovski has an impossible job. She's promoting a television series that no one wants to watch. Not because it isn't good, but because it's almost too good, too real. The Handmaid's Tale shouldn't feel like our 2017 society, yet the fictional, dystopian, totalitarian society born out of a 1985 Margaret Atwood novel feels all too prescient, with its focus on subjugating women, punishing gay people, and taking away human freedoms in the name of "protecting" citizens. It's frankly hard to watch stories of a terrifying society that feels like it's shades away from our own, but, as much as the series may seem to be echoing common fears, The Handmaid's Tale is doing something productive with Strahovski's character, Serena Joy, by dodging a harmful stereotype — namely that of the villainous "woman scorned."

In the series, set in the fictional republic of Gilead, the actor plays Serena Joy, a wife who regularly watches her husband force himself on their handmaid, Elisabeth Moss' Offred, in the name of procreation. Serena is a character who could be seen as the villain in the series' very handmaid-centric narrative, and while the series initially begins to play out shades of the expected "other woman" narrative between the wife who's desperate for a baby and the handmaid who holds the power to actually deliver that, it's quickly made clear that neither woman actually wants to be here. They don't have any power in this extreme patriarchy, and so the typical wife-versus-other-woman storyline must everything but simple.

"[The series] raises a lot of issues because this 'other woman' is basically sexually enslaved to the 'regular woman' ... and her husband," Strahovski says, her brow furrowed as she explains the complicated nature between the characters during a visit to the Bustle office in mid-April.

"Serena Joy, on paper, is the one with the power, but that’s not the case," Strahovski says.

Despite her lack of actual agency as a woman in the patriarchal republic of Gilead, Serena is still in danger of being painted as a villain, especially with a heroic character like Offred for viewers to look to. But Strahovski refuses to let it be that simple.

The comparison sits heavy in the room when Strahovski says it. Serena technically lives a privileged life, dressed in fine clothes, wed to an important man. But her gilded life has deep cracks in it and, the way Strahovski sees it, Serena lost her power long before Offred came into her home.

"I do feel like at, some point, Serena dropped out of that conversation when it came to the finer points perhaps of how exactly they were going to perform the [sex] ceremony because that was one of the things I felt really hard to wrap my brain around," Strahovski says. (In the series, Offred's head sits in Serena's lap while Serena's husband, Fred, rapes Offred each time the family tries to procreate.)

"Even a woman of faith who is taking this scripture and applying it to ... this real life ceremony of your husband being able to have sex with your handmaid so that you can have a child," she says, pausing for a moment to gather her thoughts. "I don’t know what woman is just going to be 100 percent comfortable with that and not feel anything and not feel sad and angry and not regret maybe what they had done to partake in the creation of something like this."

It's not uncommon in 2017 to have see complicated anti-heroes like the one Strahovski has constructed for the show. But, what makes hers unlike "the woman scorned" you may have seen in the past (Lila on Dexter, Becky on Scandal, Dean Munsch in Scream Queens) is the fact that, in the world of The Handmaid's Tale, the wife and "the other woman" are practically parasitically dependent on each other against their will. They're being made to compete for one man's attention, not just by societal pressure, but by actual law.

This relationship is further complicated because the Hulu adaptation makes Serena much younger than she is in the book, and thus much closer in age to Offred. Showrunner Bruce Miller told Variety this change from the book was meant to intentionally pit the women against each other more directly. "I was very mindful of the relationship between Serena Joy and Offred,” Miller told the outlet. "It felt like they weren’t in competition. She wasn’t taking a role that Serena Joy wanted more than anything for herself."

For Strahovski, making her character younger opened up the doomed, but very present possibility of friendship with Offred. "You look at these two women, who are around the same age, who outside of Gilead could have just been friends maybe once upon a time. But they’re not. They’re in Gilead and one of them is barren and the other one is not," says Strahovski.

Although the anger and resentment on both of their parts is visible throughout the episodes, there are still flickers of companionship — stiff and awkward as the duo might be. At one point, Serena — convinced that Offred is pregnant — takes time to make her a special meal and invite her to her friend's house for a social gathering. In moments like these, it's a desire for connection, rather than succession that drives Serena — separating her even further her the age old jealous wife trope, in which the woman scorned is often full of fury.

"Serena wants to connect to somebody, even if it's Offred," Strahovski explains. "For Serena, she set it up ... this society where you can’t connect and you’re not allowed to connect." In Gilead, there is no trust among any of the women, or anyone else for that matter, and it leaves Serena in near isolation.

"She can’t even connect to [her husband] the way she used to. She had that right taken away from her to connect with him sexually and to connect with him intellectually," the actor says. "She can’t read, she can’t write, she can't be the spokeswoman and author that she once was ... now she’s committed herself to this life."

She's cast aside by the system she helped create; one in which she can no longer turn to her literary hobbies, and is instead simply desperate to have a child at the hands of her husband's sexual slave and procreator. In this society, no woman could possibly have enough agency to be a villain and for Strahovski, that's what's so "alarming" about The Handmaid's Tale.

"When I watched the first five episodes, I had to pause it to recover from certain moments, because they do feel too close to home," she says. "In the news here, now, you’ve got a bunch of white men deciding what women are going to do about their bodies," she pauses before emphasizing it again, "their own bodies."

"It was an interesting process filming this, because the current political environment was definitely at the forefront of my mind," the actor says. "Suddenly it became a whole lot more precious to be a part of this show ... and they’ve done it so well just in terms of filming and the direction and the writing that they really have [shown] that it wouldn’t be such a long road to get to where we are in the show."

That proximity is exactly why the buzz around the series is so strong, but the inevitability of The Handmaid's Tale stirring up tough conversations is something that Strahovski seems to be looking forward to.

"[The reaction] is going to be strong because of all the controversy and the issues that it does bring up and the conversation that it brings up," she says. "But if there was ever a right time for it, I feel like right now is a really great time to talk about how — as half of the population, as women — we can protect ourselves and have our voices be heard."

Lucky for Strahovski, her voice is sure to be heard loud and clear when audiences meet Serena Joy and see that she's not what they expect — she's a caged bird in a society that doesn't even give her enough power to be the villain in her own scorned woman story.