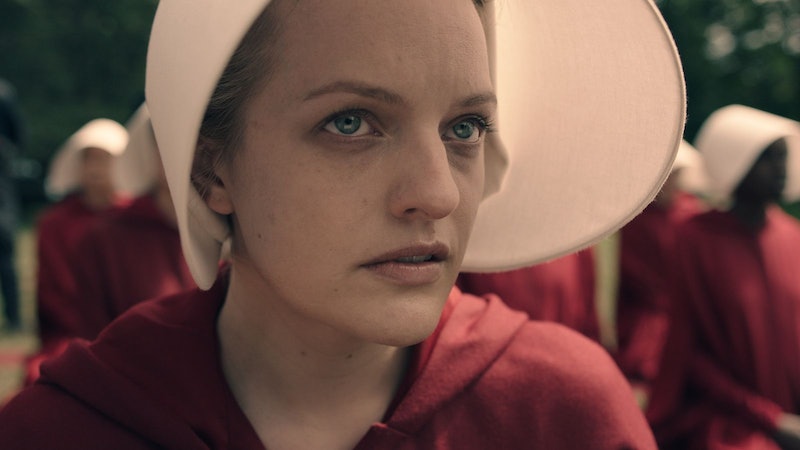 With chart-topping appearances on Amazon, a graphic novel adaptation coming soon, and a Hulu series out this month, you might be wondering just what happened in The Handmaid's Tale to make it so popular right now. No matter if you've read the book or not, I've got you covered with this refresher.

Spoiler warning: If you have not read The Handmaid's Tale, you should be aware that this article spoils the entire novel.

Published in 1985, Margaret Atwood's The Handmaid's Tale takes place after a coup that replaced the U.S. government with the hyper-patriarchal Republic of Gilead.

In keeping with its "values," Gilead does not recognize pre-existing marriages that do not conform to its laws. The partners in these relationships are separated, and their children are adopted out to high-ranking, childless couples. This compels Atwood's narrator to flee across the border into Canada with her previously divorced husband, Luke, and their unnamed daughter.

Unfortunately, the family is caught. Luke is never seen or heard from again, and their daughter is sent to another family. The narrator chooses to become a Handmaid, and is sent to the Red Center for training.

Like the forced adoptions, the Handmaid institution helps to soothe one of Gilead's biggest anxieties: the decline of healthy, white births. The country faces high instances of infant mortality and birth defects among white babies, known as Unbabies or "shredders" in Gileadean parlance.

That white anxiety dictates many aspects of Gilead's caste system. Black Americans — known as the Children of Ham — are enslaved in North Dakota farming camps. White women who can't or won't have children are declared Unwomen and shipped off to clean up radioactive waste in the Colonies.

The four men's castes in The Handmaid's Tale are all associated with military rankings. Meanwhile, women may be Aunts (female wardens), Wives, Handmaids, Marthas (housekeepers), or Econowives, depending on their social status, age, and fertility.

Only high-ranking men may have Wives, Marthas, and Handmaids in their homes. The rest get Econowives, who wear dresses striped with the uniform colors of the other women's castes — blue for Wives, green for Marthas, red for Handmaids — to show that they have many duties.

If a Wife cannot bear children, her husband may be assigned a Handmaid, who will engage in monthly sex ceremonies to get pregnant. The idea is based on the Book of Genesis, in which two infertile women offer up their handmaids as surrogate mothers.

Atwood's narrator becomes known as Offred — literally of-Fred — when she is assigned to the Commander. This is her third assignment. If she fails to give them a baby, she will be sent to the Colonies. The Commander's household includes his Wife, Serena Joy; two Marthas; and a Guardian named Nick, who acts as the family driver and bodyguard.

In her room, Offred finds an inscription carved by a previous Handmaid: Nolite te bastardes carborundorum. She does not know what it means, but uses it as a kind of prayer.

Handmaids pair up for daily errands. Offred's partner is a woman named Ofglen. They are supposed to watch each other for any subversive tendencies. Because of this, they engage only in limited conversations.

On their first outing, the two Handmaids spot Ofwarren, who is pregnant. Offred recognizes Ofwarren as Janine from the Red Center. Janine kissed up to the Aunts, and had at least one breakdown, in which she flashed back to her days as a waitress.

The memory of the Red Center makes Offred think of Moira, her best friend from before, who also trained as a Handmaid. Moira was a lesbian who famously tied up an Aunt and escaped the Red Center by wearing her uniform. Offred suspects that she has been killed or sent to the Colonies.

Gileadean doctrine says that only women can be sterile. Handmaids must have monthly gynecological exams to monitor their reproductive health. Offred's doctor removes her privacy screen during his examination, and offers to help her conceive a child, suggesting that the Commander might be sterile. Having sex with another man would doom both of them to die. She refuses, but wonders if this is how Ofwarren conceived.

The sex ceremony requires the Handmaid, the Commander, and his Wife to be in the bedroom together. Offred lies on the edge of the bed between Serena Joy's legs and clasps her hands, while the Commander stands. All three remain fully clothed.

Later that night, Offred sneaks downstairs, where she runs into Nick. He kisses her, then tells her that the Commander wants to meet with her the next day. This is forbidden, because a Commander is only supposed to see his Handmaid during the ritual.

The next day, Ofwarren goes into labor, and all the Wives, Handmaids, and Aunts must be present. The Wife of Commander Warren play-acts her own labor, and the other Wives fawn over her as if it is the real thing. When Ofwarren delivers on her birthing stool, the Wife climbs into a seat on top to take part. She names Ofwarren's baby Angela. The Handmaid will be allowed to nurse Angela for a little while, but will soon be sent on another assignment.

After returning home, Offred visits the Commander for the first time. He asks her to play Scrabble with him: an illicit act, because of Gilead's blanket ban on women's literacy. Their meetings become regular.

On one outing, Ofglen risks asking Offred a religious question. When Offred answers against doctrine, she learns that Ofglen is part of the Mayday resistance movement, which aims to overthrow Gilead. Offred never formally engages in any Mayday activities, but she supports the movement, and receives updates from Ofglen.

Offred asks the Commander about Nolite te bastardes carborundorum. He says it's a Latin joke meaning "Don't let the bastards grind you down." The Commander tells her that the previous Handmaid died by suicide after his Wife learned of their meetings.

A few days later, Serena Joy tells Offred that the Commander may not be virile. She says Ofwarren got pregnant by a doctor, and that Offred should have sex with Nick to conceive. Offred agrees.

Through Oflgen, Offred learns that Janine's child turned out to be an Unbaby. Janine has a new assignment and is no longer Ofwarren. Ofglen reminds Offred that Fred is a powerful Commander, and asks her to gather information.

At the start of their next meeting, the Commander gives Offred a sexy outfit and some old makeup. He has Nick drive them to Jezebel's, which Offred learns is a secret brothel for Commanders. She spots Moira among the prostitutes, and they meet up in the bathroom.

After an almost-successful escape attempt, Moira was apprehended and given the choice between Jezebel's or the Colonies. Moira tells Offred that the sex workers can get whatever drugs and alcohol they want, and nobody cares if they have sex with each other, so long as they service the Commanders when they visit.

The Commander has purchased a room for them at the hotel. He forces Offred to have sex with him for the first time outside of their monthly ritual, which will take place the next night. The bed is covered in flowers.

Late on the night of the ritual, Offred meets with Nick. She enjoys sex with him, but feels sad afterward. He comforts her, telling her that this doesn't have to be about love. Regardless, she feels passion for him, and they begin to meet outside of their arrangement with Serena Joy.

Offred and Ofglen attend a mass execution. A man is brought out for the Handmaids to kill with their bare hands. They are told that he has raped two Handmaids, one of whom was pregnant, and that her baby died as a result. Ofglen runs forward and kicks him in the head, before the other Handmaids tear him apart. She later confesses that the man was a Mayday agent, and that his charges were concocted to enrage the Handmaids.

The next time they meet to run errands, Offred discovers that Ofglen has been replaced. The new Ofglen knows about Mayday but does not support it. She tells Offred that the old Ofglen died by suicide after learning that she was going to be arrested.

That night, a black van pulls up to arrest Offred. Nick uses her real name and tells her that the men are with Mayday. The Commander demands a warrant, which the men do not have, but they convince the household that Offred is a spy who has put them in jeopardy. She leaves, and her story ends.

In the epilogue of The Handmaid's Tale, readers learn that Offred's account was recorded on a series of found tapes. It is unknown what happened to anyone in the story. Gilead is no more, but college students study its history and society. The Handmaid's Tale is a large part of their curriculum. Atwood expanded this epilogue in recent editions, adding questions and answers from students and lecturers.