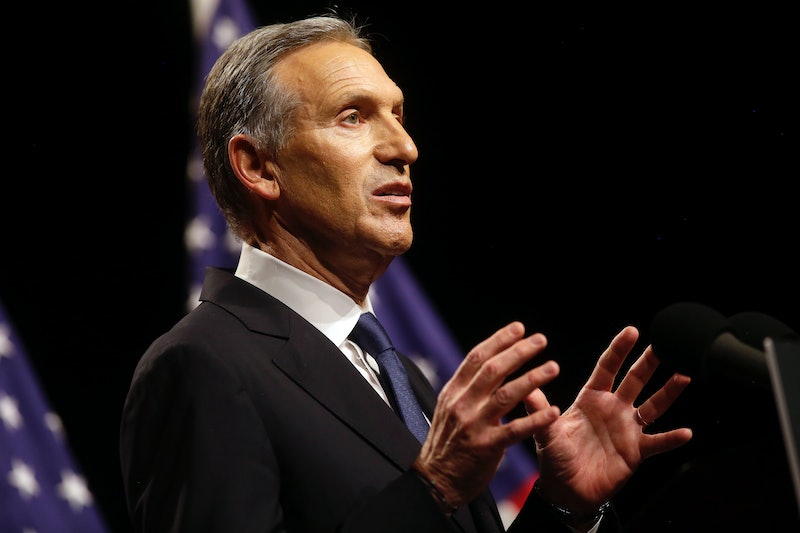 During a CNN town hall on Feb. 12, former Starbucks CEO and chairman Howard Schultz said he doesn’t "see color," CNN reports. "I would just say, as somebody who grew up in a very diverse background as a young boy in the projects, I didn't see color as a young boy, and I honestly don't see color now," Schultz told CNN's Poppy Harlow. Schultz, who is running for president in 2020, added, "We need to do everything we can to restore the humanity of the country, and the president has a large role to play in that."

Schultz's comments were in response to Harlow's questions about the April 2018 incident at a Philadelphia Starbucks, in which an employee called the police on two Black men at the location who hadn't ordered anything, CNN reports. The men were taken into police custody but were later released due to lack of evidence, says CNN.

Saying that you "don't see color" might sound inclusive on the surface, but many critics pointed out that saying you "don’t see color" actually supports the systems of oppression that are in place today. Bustle reached out to Howard Schultz for comment, and we will update this story when we receive a response.

According to a 2018 report published in Current Directions of Psychological Science, there’s a ton of literature out there documenting the models of diversity or diversity ideologies, meaning the way people think about diversity. The authors of the report said that white people typically support a colorblind mentality more than people of color because it allows them to believe they are nonprejudiced. This has effects on how parents teach their children about racism, too; when The Washington Post writer Megan Underhill was researching how white people think about race and racism, she learned that white parents typically don't talk to their kids about race, racism, or racial inequality. If they do, Underhill wrote, it's usually using the colorblind rhetoric.

"Not seeing color" presents a vision of a fully equal society where race doesn’t have any effect on how people’s lives turn out, according to the authors of the study in Current Directions of Psychological Science. But the problem is that people in our society aren’t treated equally, and ignoring how people of color are treated differently on the basis of skin color — AKA, not seeing color — only leads to further inequality.

And the study authors say many people actually use a colorblind attitude to keep their positions of power in society, even if they don’t realize that’s what they’re doing. “When threatened, White Americans high in social dominance orientation use color-blindness to defend the status quo,” Victoria Plaut, Kecia Thomas, Kyneshawau Hurd, and Celina Romano, wrote in the report. “Color-blind racial attitudes also resonate with low-status group members high in social dominance orientation.” In other words, a colorblind attitude may particularly resonate with white people who may not realize that their skin color is itself a privilege, since they may not have a lot of power in their day-to-day lives.

That means when "not seeing color" is used to frame society as fully equal, says the authors, it’s used to negate instances of racism that are happening today — like when those two men were arrested while being inside Starbucks without having ordered anything. Countless others have done exactly what those two men did that morning: they went to their local Starbucks, sat at a table to wait for someone, and didn't buy anything. The difference is that no one called the police on them. A colorblind mentality suggests that those men were arrested as part of a simple misunderstanding, or by coincidence; it ignores the broader structures of discrimination at play.

Because what might look like a "simple misunderstanding" can lead to deadly violence, a threat one of the men, Rashon Nelson, recognized. He told NPR, "Anytime I'm encountered by cops, I can honestly say it's a thought that runs through my mind," Nelson said. "You never know what's going to happen."

Not seeing color sounds beautiful on the surface, but it ultimately serves as an insidious way to oppress people of color.

Even though more police-involved fatal shootings involved white people in 2016, the death rates were much higher overall for Black, Latino, and Native American people, according to the U.S. Commission on Civil Rights. In fact, Black and Native American people are fatally shot in the United States twice and three times more respectively compared to white people, says the U.S. Commission on Civil Rights. When you turn a blind eye to how race plays a role in how the police respond to calls, the divide in how people are treated by the criminal justice system becomes even more expansive. And the results can be fatal.

If you hear someone say they don’t see color, you can tell them it’s admirable they want the world to be equal. But the reality is, for people of color, the experiences related to their race are seen and felt on a daily basis. If someone truly wants a world where race doesn’t play a factor in a person’s life, the best way to do that is to see color. And to support it. Support businesses owned by people of color. Volunteer for organizations that uplift people of color. And, most importantly, know when it’s time to sit back and listen when people of color stand up and speak about issues that affect their lives.

Not seeing color sounds beautiful on the surface, but it ultimately serves as an insidious way to oppress people of color. See us, hear us, and stand behind us. That’s how we reach not equality, but equity.