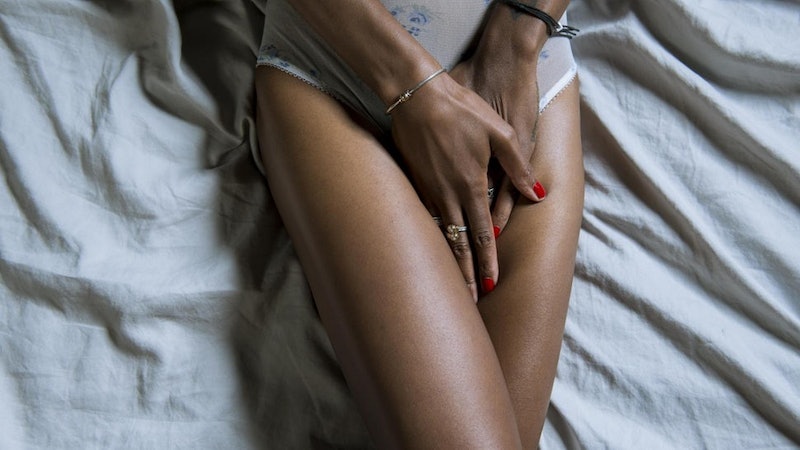 In this week's Sex IDK column, Emma McGowan, certified sex educator and writer, answers your questions about how to handle a partner whose fear of oral cancer is keeping him from performing oral sex.

Q: My boyfriend read about someone who got throat cancer after going down on a woman with HPV. I have HPV — and now he says won’t go down on me. How can I respond?

While it’s your boyfriend’s choice to do or not do any sex act (just as it is yours), that sounds like a really frustrating situation. It's also not based in facts: While yes, HPV can lead to certain cancers, the risk of cancer from oral HPV is low, though Mount Sinai notes it's rising. Still, stigma against HPV is incredibly common, but largely unwarranted, because nearly everyone has it — and it's generally harmless. Let's talk about ways to approach this conversation.

First thing's first: It is possible to get throat cancer from exposure to certain strains of HPV — 13 of the approximately 100 known strains are considered “high risk” and can lead to cervical, throat, or anal cancer, according to the CDC. Just one type in particular, HPV-16, accounts for the majority of oral cancer cases. According to the Center for Disease Control (CDC), many people are exposed to both high-risk and low-risk strains of oral HPV over the course of a lifetime. Around 10% of men and 3.6% of women have oral HPV, while the majority of people have some strain of HPV at some time in their life.

But here’s the kicker: According to the Oral Cancer Foundation, only 1% of oral HPV infections lead to oral cancer. And according to the American Cancer Society, 38,140 men (out of the approximately 152 million men in the United States) will develop oral cancer in 2019. So is there a risk of developing throat cancer if you have oral sex with someone who has high-risk HPV? Sure. But is it likely? Nope. In fact, it’s statistically very unlikely. And when we’re talking about risk factors for oral cancers, it might be worth asking about your boyfriend’s other habits — like drinking alcohol, using marijuana, or smoking cigarettes — which are also associated with a risk of oral cancers, according to the CDC.

Which brings me to another point: It's worth talking about if HPV is the main reason your boyfriend doesn't go down on you. Could it possibly be that this is a sex act he doesn’t enjoy, or doesn’t feel confident doing, and he’s using this as an excuse? It’s really worth it to have a sit-down conversation with him about this and to dig a little deeper. But if you present him with all this information, have that conversation, and he’s still insisting he just doesn’t want to go down on you because of the cancer risk, then there are steps he can take to protect himself.

First, do you know what strain of HPV you have? If it’s not HPV-16, then it’s even less likely that it will develop into oral cancer, considering HPV-16 accounts for 70% of oral cancer cases in the United States. If you don’t know the strain, you can get in touch with the doctor who diagnosed you. They should have that information on file. If you can’t get ahold of that doctor, your current doctor can do a screening for you.

Your boyfriend can also talk to his doctor about getting the HPV vaccine, which protects against HPV-16, HPV-18 (another cancer-causing strain), and even the low-risk strains that are most likely to cause genital warts. While there’s no test for HPV for men yet, it might make him feel better to be vaccinated, if he's not already.

And, finally, if oral sex is the sex act you really can’t live without, you can use a dental dam. A dental dam is a very thin, soft piece of plastic that your boyfriend can place between his mouth and your vulva and/or anus when he’s going down on you. You can buy dental dams or even cut open a condom to make one at home. The barrier between your skin and his mouth greatly reduces the risk of him contracting your strain of HPV — assuming he hasn’t already.

If your boyfriend still doesn't want to go down on you, that's his choice, but it's also your choice to stay with someone who's not into oral sex. If this sex act is really important to you, you may have to decide if going without is worth it.