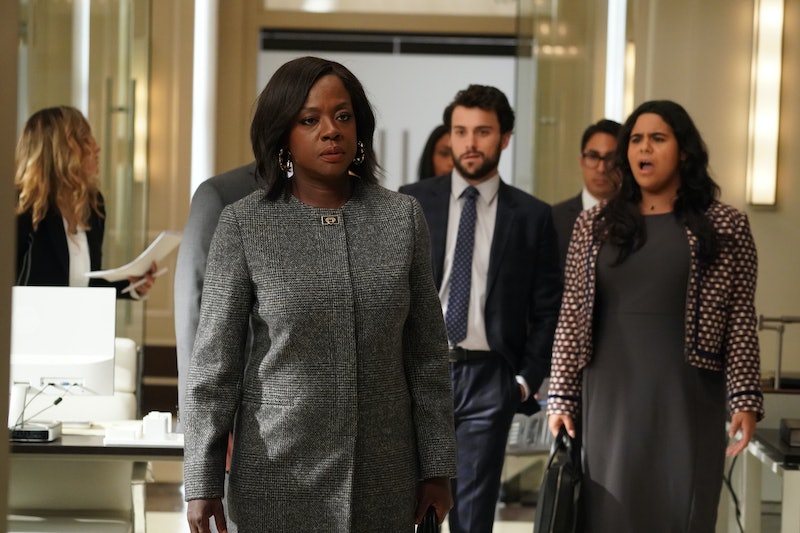 The final minutes of Thursday night's episode, "Vivian's Here," include a verbal sparring session with detectives in an interrogation room. This is well-trodden territory for the Keating 4, given the cover-up that happened after Sam's death in Season 1. But what's different here is that it's Michaela whose fingerprints are on the "murder weapon," which looks to be a fireplace poker, and she folds very quickly into demanding a lawyer — not exactly a vote of confidence for her innocence. The murdered person in question isn't named, but the police say they were an FBI informant, making the matter even more serious.

Right now, How To Get Away With Murder seems to be insinuating that Gabriel's mother, Vivian, is the FBI informant, but what if it's Annalise? She's gotten away with a lot of crimes throughout the series: she's bribed, she's cheated, she's lied, and she's covered up murders. Is it possible she's not actually that good at getting away with murder, but that the FBI has been looking the other way because she's been gathering information for them?

Annalise could be watching Tegan. Or the government of Pennsylvania. Or Middleton College. Or Frank. Or Bonnie. Or honestly, anyone. She has a knack for finding out secrets, and the whole business about getting FBI agents fired could have been a ruse to throw others off her scent. Why does Annalise keep saying that the FBI could be amassing a file on her? Because they are. They have a file. But they're not going to use it — as long as she keeps providing the right information.

If Annalise is the dead FBI informant, it would explain why Michaela's prints are on the murder weapon. Michaela is already angry that Annalise knew her father and didn't tell her, because Michaela wasn't able to meet her father before he died. If Michaela was the first one to find out that Annalise had actually been everyone around for five years to help the FBI, it could be the final straw. Michaela is clearly fed up with Annalise, and given all the lies and stress she's has put the Keating 4 through over the years, it's kind of understandable (not that we're condoning murder, but that is the name of the show).

In a statement to E!, How To Get Away With Murder showrunner Pete Nowalk said that he was grateful to have the opportunity to finish up the series in a finite way and one that he sees fit. Including a final reveal that Annalise was in on the crimes all along would be exactly the kind of twist that would let the show end with a bang.