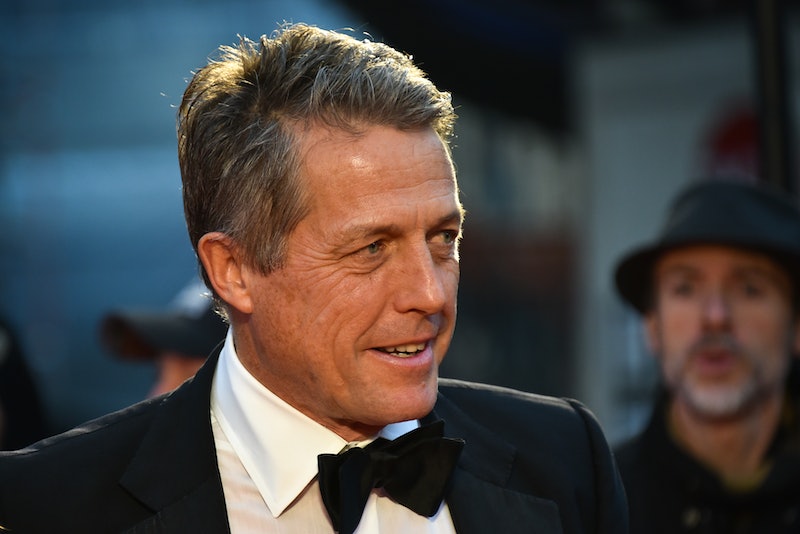 When it comes to Christmas and feeling festive, the only politician I want to see is Hugh Grant in Love Actually. Sadly, with the 2019 election falling on Dec. 12, that’s absolutely not been the case this Christmas. But now, in a truly nightmarish twist, there's been a cross over between the two, with Boris Johnson deciding to bring out a Love Actually-inspired advert in a bid to secure votes. However, Grant was quick to point out a mistake in Johnson's video that the actor thinks was a calculated move on behalf of the PM's PR team.

On Dec. 9, Johnson unveiled a festive-themed advert for the Conservative Party in the run-up to the election. Yep. Never did I (or anyone) think that Brexit and Love Actually could be interlinked, but that's 2019 for you. Anything goes.

The video in question involves Johnson mimicking the scene in which Andrew Lincoln holds up cards for Kiera Knightly. The Conservative leader holds up his own placards with various campaign slogans and promises written on them and, towards the end of the advert, we see the phrase 'Vote Conservative Actually'. Good lord.

The stunt was picked up by Love Actually’s beloved Prime Minister, who, while appearing on Radio 4's Today programme said: "I thought it was quite well done. Very high production values. But clearly the Conservative Party have an awful lot of money. Maybe that's where all the rubles went?"

Grant didn't stop there. He added: “But I did notice that one of the cards from the original film that he didn’t hold up was the one where Andrew Lincoln held up a card saying, 'Because at Christmas you tell the truth.' I just wonder if the spin doctors in the Tory party thought that was a card that wouldn’t look too great in Boris Johnson’s hands.”

When it comes to the December 2019 election, Grant hasn’t come to play. He’s publicly campaigned over the last few weeks against Johnson and the Conservatives, joining Liberal Democrat MPs canvassing on the streets. The Guardian reports that, at an event with Lib Dem candidate Chuka Umunna, Grant said, “I don’t want to sound dramatic — even though you could argue that is my job — but I really think we are facing a national emergency. I don’t think that what is left of the Conservative party, once they’ve expelled anyone who was responsible or decent or sane, is something I can contemplate as the government of a country that I love.”

More like this
Rita Ora Finally Opened Up About Marrying Taika Waititi & Their "Perfect" Wedding
By Sophie McEvoy and Catharina Cheung
Stephen Graham & Steve McQueen Are Working On A Wartime Drama
By Darshita Goyal
Channing Tatum “Nearly Killed” Salma Hayek During 'Magic Mike' Lap Dance
By Sam Ramsden
Jemima Khan Used Her Own Life As Inspo For 'What’s Love Got To Do With It?'
By Darshita Goyal
Get The Very Best Of Bustle/UK
Sign up for Bustle UK's twice-weekly newsletter, featuring the latest must-watch TV, moving personal stories, and expert advice on the hottest viral buys.