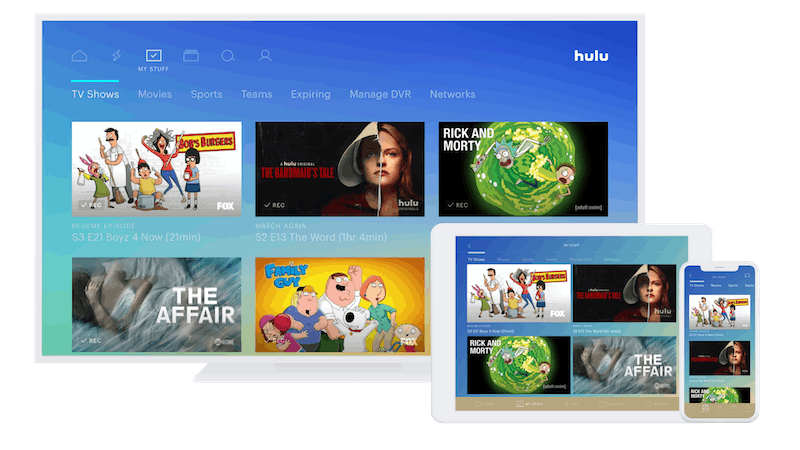 Millennials and their streaming services: It's a love affair that's built to last. And one popular ad-based service just dropped some major news this morning regarding its pricing that all of us streamers will want to know about: Hulu lowered its basic subscription price to $5.99 per month, meaning that both new and existing customers will have access to the basic ad-supported subscription plan they know and love for a whole $2 cheaper than before — effective Feb. 26, 2019, according to Business Insider. This official policy change follows Hulu's January 2019 announcement that it would be lowering the price on its cheapest plan. Hey, when you're young, broke, and love to marathon-watch TV, anything helps — even $2 a month, right?

If you're a current or potential future Hulu customer, here's what you need to know. Hulu currently offers four subscription plans (a basic ad-supported plan with a second ad-free option, and an ad-supported plan that includes live TV, which also offers a second ad-free option). According to Business Insider, February 2019's price drop applies only to the basic ad-supported plan, which has always been the company's most affordable option — and customers will still be able to enjoy the same selection of programs, simply at a lower price. The ad-free version of the basic subscription plan reportedly won't see any change in its monthly fee, and is sticking at $11.99 per month. All plans still offer you the option to add-on extra channels and other customizations for added fees — so as far as the basic subscription options go, all that's changing is the newly-lowered price on the ad-supported version.

That said, the basic plan's price drop does come at the expense of a price increase on both the ad-supported and ad-free "Hulu + Live TV" packages, which will apparently be jumping up in price by $5 and $7 per month, respectively. All price changes are effective beginning Feb. 26 for new customers, and all you existing customers will reportedly see the adjustment in your next billing cycle.

So, how does Hulu's new low price compare to other popular streaming services? It's pretty competitive: Just last month, Netflix raised the monthly subscription price on all of its plans, with its cheapest plan (which doesn't offer HD and can only be viewed on one device at a time) now running at $8.99 per month. An Amazon Prime subscription will cost you $12.99 per month (although in addition to Prime Video access, it of course also includes Prime shipping perks, access to Prime Music, and more). And if you want to go with HBO Now, you're looking at $14.99 per month for a subscription. This means Hulu's fresh price drop makes it the cheapest option for a basic subscription-based streaming service, which is exciting for anyone on a budget. But that said, keep in mind that unlike many other services, Hulu's cheapest plan includes ads — so if a fully ad-free experience is something that's important to you in a streaming service, the company's lower-cost option may not be worth the savings.

There are certainly no shortage of subscription-based streaming services at our fingertips, and with so many production companies launching additional ones (which will subsequently pull content off of other streaming services, such as the recently-announced services that are reportedly being launched by Disney and NBC), it's becoming a more and more competitive market.

All in all, though, this is very good news for any current subscribers of Hulu's basic ad-supported plan, and makes for a solid option for anyone currently on the market for a new streaming service who doesn't mind an ad or two.