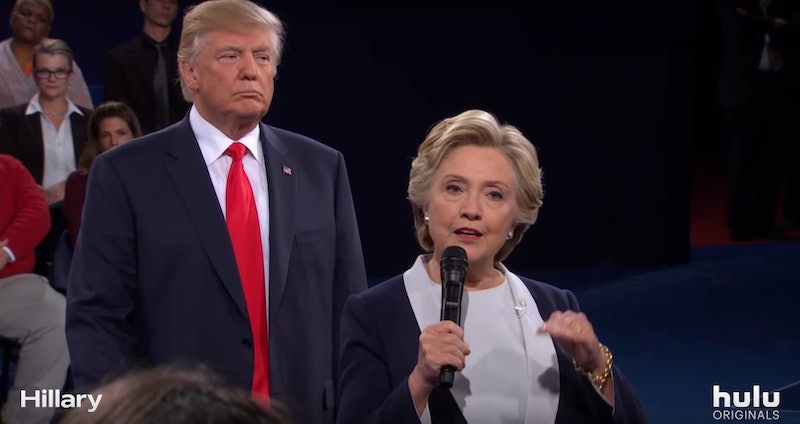 In the trailer, Clinton tackles her reputation as the “most admired and vilified women in American history” amid her presidential run against Donald Trump. She says of her image in the clip, “Somebody asked me, ‘What do you want on your gravestone?’ and I said, ‘She’s neither as good nor as bad as some people say about her.'” Along with footage from the presidential trail, the trailer offers insights into her marriage to husband Bill. “Chelsea put herself between us and held both our hands trying to keep us together,” Clinton says in the clip. Elsewhere, Saturday Night Live’s Clinton impersonator Kate McKinnon makes a brief cameo.

In a press release, Burstein said of bringing the docuseries to life,

"Secretary Clinton gave me extraordinary access to her life story, which is utterly compelling. Beyond that, given the particulars of her narrative, we were able to highlight the history of the women’s movement over the last fifty years, and especially what happens to women who aspire to take on roles traditionally inhabited by men.”

Hulu CEO Randy Freer echoed the same sentiments and called Hillary a “reflective and unflinching look” at the "most recognizable female political figure in history.” Freer said in a statement, “Hillary is yet another example of Hulu’s continued commitment to elevating powerful and relevant stories about the human experience."

Clinton made history when she became the first woman presidential nominee for the Democratic Party in 2016, but her experience in the political realm goes much further back. The former first lady also represented the city of New York in the U.S. Senate between 2001 and 2009. And after that between 2009 and 2013, she served as the Secretary of State under President Barack Obama. In her 2017 memoir What Happened, Clinton reflected on her historical campaign and the decision to remain in the public sphere despite the loss. She wrote, “There were plenty of people hoping that I, too, would just disappear. But here I am."

More like this
Man Meets Politics: ‘Boy Meets World’ Star Ben Savage Is Running For Congress
By Jake Viswanath
Watch Jacinda Arden’s Devastatingly Honest Resignation Speech
By Sam Ramsden
What The UK Blocking Scotland’s Gender Recognition Bill Means
By Sam Ramsden
The UK Government Is *Finally* Banning Conversion Therapy
By Sophie McEvoy
Get Even More From Bustle — Sign Up For The Newsletter
From hair trends to relationship advice, our daily newsletter has everything you need to sound like a person who’s on TikTok, even if you aren’t.