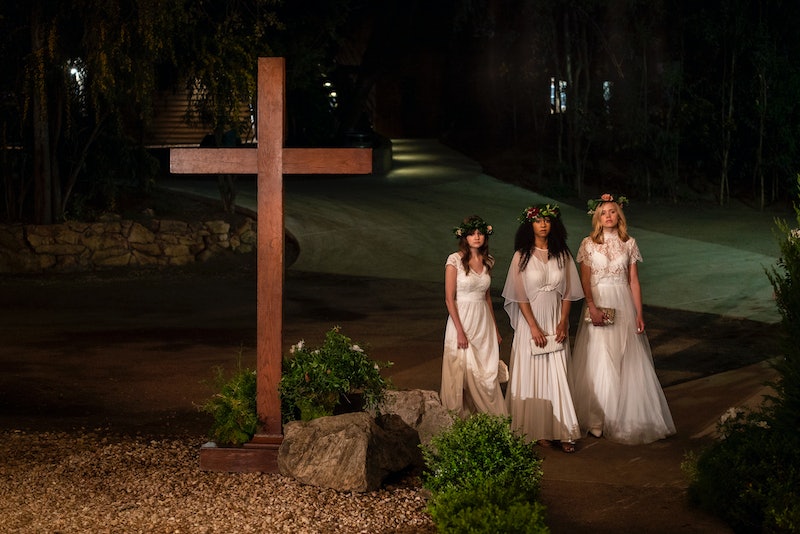 Are you tired of having the same Midsommar-inspired nightmares? Lucky for you horror fans out there, Hulu's newest addition to its Into the Dark anthology, Pure is coming to give you brand new nightmare fuel. And based on the trailer, this is one scary movie that will leave you creeped out and ready to take on the patriarchy. Hulu's Into the Dark: Pure trailer plays like a younger, horror take on The Handmaid's Tale coupled with the flowery yet unsettling campground aesthetic of Midsommar In other words, it looks completely horrifying, but utterly riveting.

Pure, the twelfth and final installment of Into the Dark Season 1, takes place at something called a "Purity Retreat," where young women promise to remain "pure" until their fathers give them to another man. And as you can tell by the trailer, these fathers are just as creepy and overbearing as you'd expect. "Some people out there say that we try to control our women," Pastor Seth (Scott Porter) says in the trailer. "We love our women," he clarifies — a statement that is immediately followed by the image of a young girl screaming, locked in a cage. Sounds like real love, right?

Written and directed by Hannah Macpherson, Pure's official synopsis describes the Into the Dark installment as a "coming-of-age horror story." And, while three of the girls — played by Ciara Bravo, McKaley Miller, and Jahkara Smith — might go to this Purity Retreat to promise to obey their fathers, they don't necessarily intend to keep this promise. As the synopsis teases, "When one of them begins to see a supernatural entity, the terrifying question emerges, what is more dangerous: the demon they've unearthed, or the pressure to confirm to their fathers' expectations." Sounds absolutely chilling.

In addition to Porter, Bravo, Miller, and Smith, Pure also features Annalisa Cochrane, Jim Klock, and former Varsity Fanclub member T.C. Carter in the main cast. And, while this ensemble cast may have come together to bring this terrifying story to life, Pure is actually also serving as a reunion for two actors who appeared in a pretty happy and upbeat show. Fans will recognize Miller and Porter as stars from The CW's Hart of Dixie, in which they acted alongside Rachel Bilson. For fans of that adorable show, Pure will be a nostalgic watch — aside from the gigantic shift in tone and storyline.

Needless to say, Into the Dark's Pure is definitely going to be one of those TV experiences you won't want to miss. The episode premieres Friday, Sept. 6, and if you're interested in following along online, you can check out the hashtag #IntoTheDark, as well as the @blumhouse and @hulu Twitter accounts. And, if you're new to Into The Dark, there's already an entire season's worth of movies just waiting to be marathoned on Hulu.

Into the Dark: Pure is acting as the Season 1 finale to the anthology series. But, don't fret, because the series was just renewed for a second season, set to premiere in October. So, let your obsession thrive, horror lovers.