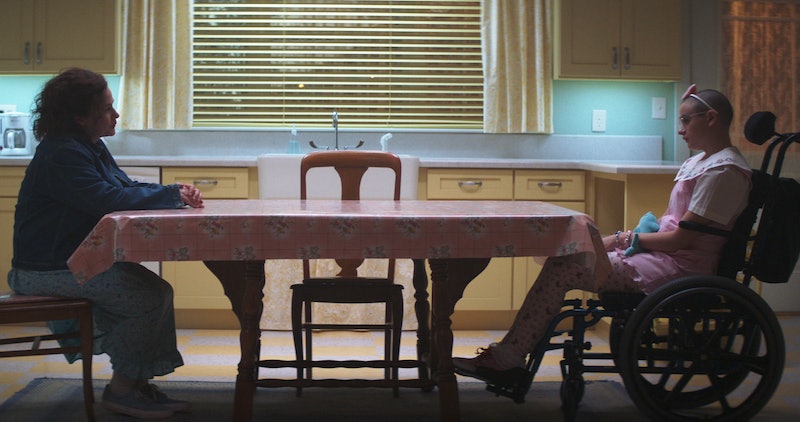 After this you may need a very long and very cleansing shower. Hulu's new The Act trailer previews Gypsy Rose Blanchard's disturbing reality and it's two minutes of sheer creepiness. Joey King and Patricia Arquette completely transform into Gypsy Rose and her mother, Dee Dee Blanchard, in the Hulu trailer that will leave viewers shook by their haunting performances. The good thing is, audiences still have about two weeks to mentally prepare for what's in store from the upcoming chilling anthology series.

Following the short teaser trailer released three weeks ago, the latest preview, which dropped on Monday, is a more in depth look at the terror that unfolded before Dee Dee's murder in 2015. The fascinating, yet heartbreaking story will be the first chapter of Hulu's new "stranger-than-fiction true crime" series which premieres March 20.

Season 1 follows the bizarre true story of the infamous "Mommy Dead and Dearest Trial" which has had people captivated for years. Since childhood, Gypsy Rose was wheelchair-bound, taking countless medications, on a feeding tube, and believed to be terminally ill. It was ultimately revealed that her mother orchestrated her sicknesses, and mental and physical growth stunts, due to Munchausen syndrome by proxy. The disease is one in which a guardian or parent exaggerates or induces a child's sickness for attention and sympathy. In order to escape the toxicity of her mother's control and abuse, 23-year-old Gypsy Rose plotted Blanchard's murder, with the help of her boyfriend Nicholas Godejohn, in their Missouri home, per The New York Post.

Both King and Arquette are nearly unrecognizable as they completely channel their characters from the inside out. King, often in a wheelchair, dons a shaved head, large false teeth, big glasses, and kids' clothing as she speaks in a childish, high-pitched voice. She either looks utterly hopeless, terrified, or both. Arquette, on the other hand, has a stripped-down look with no makeup, short, frizzy hair, as she looms over her daughter, shoving medicine down her throat or forcefully putting injections in her.

"Everything I do, I do for her," Arquette's voice-over dauntingly says in the trailer. "That's what being a mom is, never being sure you're doing the right thing but doing it anyway." Later, Kings' character cries in her bedroom while video chatting with her boyfriend saying, "I'm so trapped. I can't tell anyone," to which he chillingly replies, "You can tell me."

The trailer begins and ends with snippets of Gypsy Rose in court, with the last few words asking, "Gypsy Rose Blanchard, how do you plead?" Rose, who's currently serving a 10-year sentence due to her involvement with the murder, testified in Godejohn’s trial last November, as reported by The New York Post. She admitted she asked him to kill her mother as a means to escape her torture. He was found guilty of first-degree murder last year and faces life in prison.

Meanwhile, King and Arquette have committed to bringing this story to the screen, and what's all the more disturbing is knowing it actually happened.