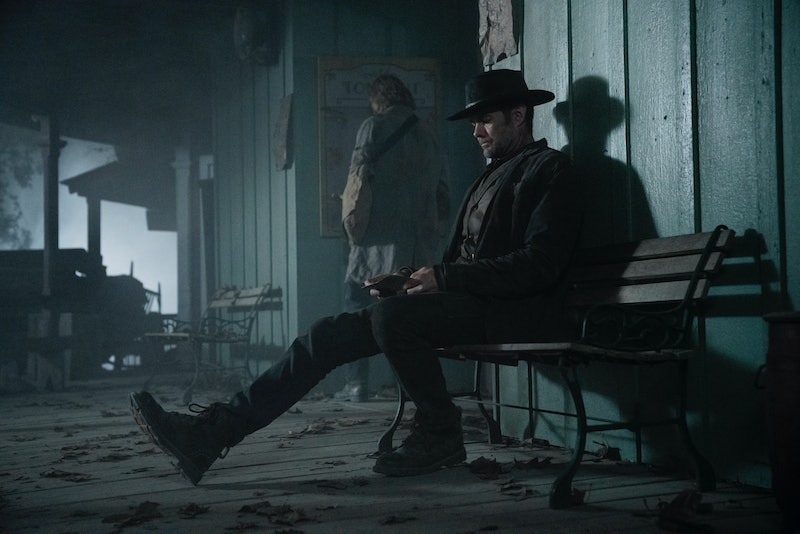 A potential safe haven fell through on Fear The Walking Dead when the convoy discovered that the abandoned theme park they were looking to settle was overrun with a zombie hoard. This particular tourist attraction that keeps popping up on the AMC series is particularly fitting for the Old West predicament that the survivors are in. Humbug's Gulch on Fear The Walking Dead is a recurring location that underlines the pioneer themes of the spinoff series.

Despite taking place in a zombie apocalypse far from "Old Town Road," Fear The Walking Dead has really embraced 2019's "big yeehaw energy" trend with Humbug's Gulch. The chain of Old West-themed amusement parks are located all over Texas, like Six Flags or Carowinds, in the fictional world of Fear The Walking Dead. We first learned about them in Season 4, when John Dorie was introduced. He used to work at a Gulch before the apocalypse on weekends teaching rope tricks. While those skills became useful later on, he wasn't a real ranch hand — just a guy who dressed up as one.

In real life, there are amusement parks similar to Humbug's Gulch in Texas. Pioneer Town outside of Austin is where Fear The Walking Dead filmed the Season 5 episode that took place mostly in a Gulch.

At the beginning of the current season, John and the others come across a Gulch that looked like "his old stomping grounds," according to him, and they were able to find supplies. It's there that they meet Dwight, the new sheriff in town from The Walking Dead. This week, the group heads towards another Humbug's Gulch and are disappointed. They don't have the numbers and weapons needed to take down the zombie hoard milling about the park, especially without the food and resources they were looking to gather from the Gulch itself.

Morgan and Alicia's group are forced to call on Ginny's group for help. They're stranded, and have to strike a deal with the black hats in order to keep going. Will Fear The Walking Dead call on any other tropes from the Western genre as this conflict plays out? Something sinister is definitely up with Ginny, and this is likely to end in some kind of standoff.

As if Ginny and her posse riding around on horses wasn't enough, these fake ghost towns of Humbug's Gulch keep reminding us as an audience that everyone on Fear The Walking Dead is just playing at being cowboys. The zombie-ridden landscape is not an undiscovered frontier for these characters. This isn't really a new world that they're settling; it's the remains of their old world. Everyone is just trying to survive and create small societies the best way they can. The only thing that the Fear characters actually have in common with the wild wild West is the lack of law enforcement.

Ginny talks a big game about pioneering, but the phony facade of Humbug's Gulch reminds us that she's lying too. Keep an eye out for more parks as the season progresses. They're pretty useful, whether for resources or just to make a symbolic and thematic point.