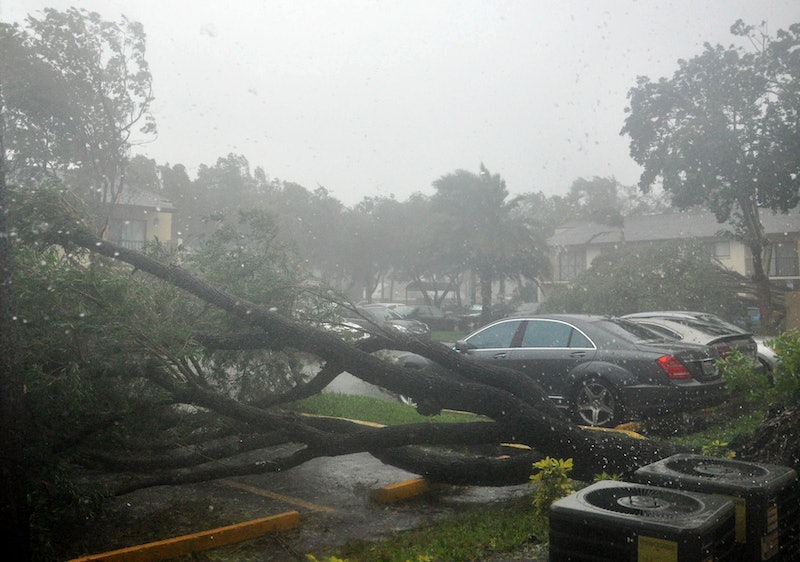 Hurricane Harvey tore through Texas, Hurricane Irma is ravaging Florida, and Hurricanes Jose and Katia are bearing down on the Caribbeans and Gulf of Mexico. Some have said that the hurricanes are among the worst natural disasters in recent years — but we should stop calling hurricanes "natural disasters," because though hurricanes do occur in the natural world, many of their most damaging effects are the result of factors that aren't natural at all, but rather human-driven.

It goes without saying that hurricanes, of course, do occur naturally. But both the severity and impact of hurricanes have been worsened by intentional decisions and choices on the part of humans, often government officials in the years leading up to a natural disasters. To call a hurricane a "natural disaster" obscures this fact and, by extension, falsely implies that there's nothing humans could have been done to mitigate their impact.

Climate change, for instance, is an enormous human-driven factor that makes hurricanes more damaging than they otherwise would be. Although there are countless perspectives from which to examine the link between global warming and hurricanes, one thing is clear: For every degree Celsius that the temperature rises, the air can hold 7 percent more water. This means that as the planet gets hotter, hurricanes become rainier and, by extension, more destructive. Earth is indeed getting hotter, and human activity is largely to blame for this.

Both the U.S. and the global community at large have failed repeatedly to address climate change and the threat it poses to the planet. President Trump's decision to withdraw from the Paris Climate Accords was only the most recent, high-profile example. A major climate change bill proposed under President Obama was rejected by the Democratic-controlled Congress, and the Supreme Court has dealt several blows to government efforts to stem the effects of global warming in recent years.

This isn't natural. These are choices that humans are making, and in a million indirect ways, they are making "natural" disasters worse than they need to be.

In addition to global warming, inadequate infrastructure and disaster preparedness has also worsened the effects of hurricanes. This, too, has nothing to do with the natural world that humans inhabit, and everything to do with policymaking decisions that those humans make.

Hurricane Katrina was a classic, tragic example of this. Twelve years after the fact, it's easy to forget that while Katrina was an absolute catastrophe that led to over 1,800 deaths and caused $108 billion in damage, the hurricane itself had weakened to a Category 3 storm when it made landfall in Louisiana. That's nothing to sneeze at, but the state's anti-flooding infrastructure was supposed to have been able to withstand a Category 3 storm, according to the Army Corps of Engineers. But it didn't, and that was due, quite frankly, to poor decision-making and human error in the lead-up to the storm.

When Katrina hit New Orleans, a staggering 80 percent of the city's levees failed, which resulted in 80 percent of the city being flooded. The levees failed because they were built on the cheap: A 2015 analysis by the World Water Council determined that Army Corps of Engineers adopted several cost-cutting measures during the construction of the levees and flood walls, ultimately saving around $100 million. But the city's residents paid the price for this: 986 New Orleanians died during Katrina, and a study from Louisiana State University's Hurricane Center found that the chief cause of the city's flooding was faulty design and inadequate construction of anti-flooding infrastructure.

Louisiana would have been hit by Katrina no matter what. In that sense, the impetus of the disaster was indeed "natural" — and yet the extent of the damage was anything but. Had officials had taken adequate steps to protect New Orleans against the hurricane ahead of time, lives and homes would have been saved. But they didn't, and as a result, the city and its residents were devastated. And that devastation fell disproportionately on the shoulders of poor and black New Orleanians: According to a study by Brown University sociology professor John Logan, 45 percent of the areas damaged by Katrina had majority black residents, compared with only 26 percent of the areas that didn't sustain serious damage.

The language we use to describe catastrophes matters. When we call a hurricane a "natural disaster," that implies that there's nothing anyone could have done to mitigate the damage, and that mindset allows us to avoid having critical conversations about how to better protect against future hurricanes, earthquakes and other meteorological and geological phenomena.

Having those conversations could very well lead to policy changes that save lives, homes and communities — but first, we need to stop thinking of these disasters as purely "natural," and acknowledge that we humans have played a role in the damage.

More like this
Why Experts Say Sleeping With A Fan On Isn’t Totally Risk-Free
By Sophie McEvoy
The 6 Best UV Umbrellas, According To A Dermatologist
By Rachael Green
The 8 Best Indoor Door Mats For Your Home
By Jenny White
Kim Kardashian Is Releasing A Line Of Earbuds With Beats
By Alexis Morillo
Get Even More From Bustle — Sign Up For The Newsletter