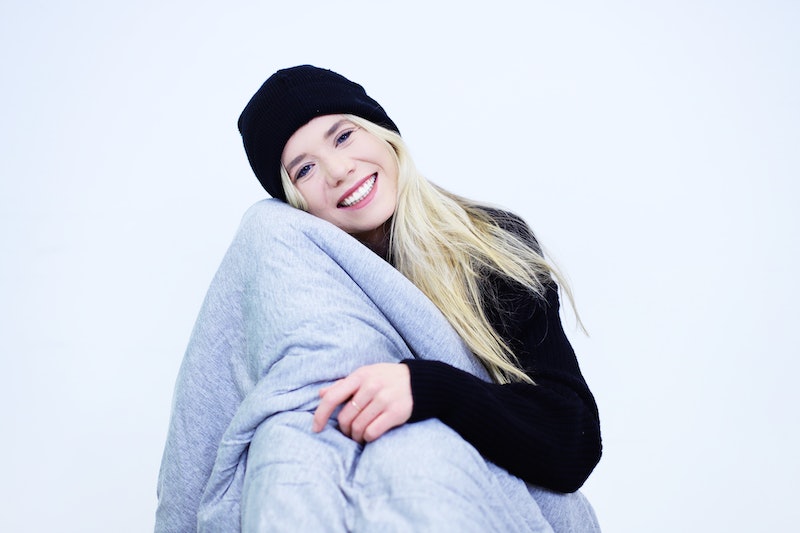 Getting adequate sleep is an important aspect of your health, and some people have turned to weighted blankets to help them snooze more soundly. These blankets have also become a popular item for those seeking relief from stress, or anxiety. While weighted blankets can be ultra-relaxing and snug, they have one glaring flaw: They tend to run pretty hot, which, if you're trying to use them to sleep, probably won't be too helpful. A new product, however, is trying to solve that issue: the Hush Iced Weighted Blanket will keep you cool in warmer weather, while still delivering the same calming benefits of a traditional weighted blanket.

No one wants to spend all night tossing and turning because they're too hot under a heavy blanket. The risk of sweating straight through the sheets all summer long, even if a weighted blanket helps your stress levels, may not be worth it. Enter this cooling weighted blanket: It’s one of the first weighted blankets designed with the hotter months in mind, and it’s currently being funded through a Kickstarter campaign launched by the company Hush Blankets.

Lior Ohayon, the co-founder of Hush Blankets, tells Bustle, “After selling several thousand blankets in our first year, and noticing that summer was a slower month for us, one of our biggest complaints from customers was that the warm, plush cover was, well, too warm. So, we decided to create a cooling blanket for the summer.”

Healthline reported that research has shown that weighted blankets may help ease the symptoms of anxiety, depression, insomnia, and other mental health issues. As fellow Bustle writer Katie Mitchell explained, this is because weighted blankets can mimic deep pressure touch (DPT) — a therapy technique that utilizes pressure from touch to encourage your brain to release natural, stress-relieving hormones, such as dopamine and endorphins. Though they aren’t a substitute for seeking help from a mental health professional, weighted blankets have proven to be therapeutic for many people.

According to the company’s Kickstarter page, Hush Iced is made from a “proprietary bamboo and cotton blend helps wick away sweat during hot summer months, while still providing weighted relief." Bamboo is becoming a popular material used in the production of activewear because of the fabric’s “breathable” quality, as Verywell reported in 2016. Bamboo also tends to be easier to clean (and less smelly!) than other linens, on top of being cool to the touch.

While the company had a goal of reaching a little under $19,000, the Kickstarter campaign was fully funded in 45 minutes, and has amassed over $180,000 in funding ever since the launch. If you’re dying to get your hands on a Hushed Iced Blanket, you can pledge $128 on the Kickstarter page to receive a standard-size blanket (which is 48 inches by 78 inches), along with the cooling cover at a 35 percent discount before the it hits regular retailers. For an extra $15, you can upgrade to a queen-size blanket. If you’re feeling a little more spendy, you can pledge higher amounts on the Kickstarter page to receive multiple blankets, until the campaign closes on Apr. 12. As of now, the blankets purchased through the Kickstarter campaign are set to be sent out in July 2019. Ohayon says that, in the future, the cooling blanket will also probably be sold on the company’s website.

Summer is just around the corner, and staying cool will be a priority. The Hush Iced weighted blanket will make it so you won’t have to choose anymore between de-stressing and staying comfortable while you sleep. Basically, it’s the blanket of your dreams.