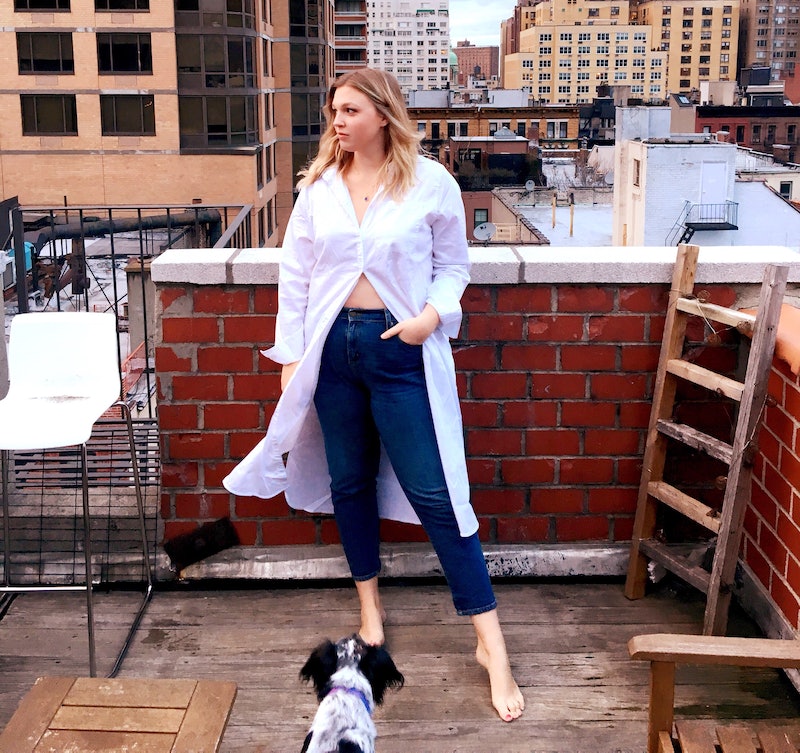 As long as I can remember, I've been telling people I hate jeans simply because I thought this was the the truth. Growing up in Florida, jeans were never something that were a necessity. When it's usually 85 degrees, dresses and skirts make more sense anyway, so it was easy for me to avoid denim when I wanted. Still, I have memories of middle school trips to the mall when my friends would shop for low rise, perfectly faded jeans from Hollister and Abercrombie & Fitch and I would simply say, "Oh, I hate jeans," as an explanation for why I wasn't trying any on. This mentality stuck with me through college, and after I moved to New York and cold weather gear was a necessity. Even then, I almost only opted for jeggings, or would buy a pair of real jeans only to give up on them after a wear or two. And then something kind of weird happened: I shopped for jeans without thinking about what size was on the tag. And everything changed.

As someone who has been 6 feet tall since I was 15, I was always a little bigger than everyone around me, even when I was my thinnest. At my lowest weight, because of how my body was built, I was a 12 in jeans. When I worked at a retail store in high school, a fellow employee asked what size I was in pants and when I told her a 10/12, she looked horrified. "There's no way you're that size, you're so small!" she told me, reinforcing what I already thought: That a size 12 was bad inherently. The mere label gave me anxiety. I remember shopping with friends who were smaller than I was and hiding the tags in embarrassment, tucking them into the folds in clothes as I brought piles of them into a dressing room. In college, I wanted a loose-fitting pair of denim shorts for summer and ordered a 14. They were the first size 14 anything I had ever bought. And even though they were too big for me and I never wore them, I cut the tag out so I didn't have to look at the number.

Now at 25, I'm a 14, and sometimes a 16 in jeans. As I went through college and my early 20s, the same shopping predicament presented itself as it had through my whole life: Even as I gained weight, I was still able to fit into the same size in tops and dresses mostly, but I would have to size up in jeans. So, as I always had, I continued avoiding them altogether. I told myself I just didn't like them, but what I was really telling myself was that not wearing them was simply easier for me to deal with than having to look at a number on a tag that I was ashamed of. When most of the world is screaming at you that smaller is better, this is a surprisingly simple choice to make.

Associating worth with a number on a tag is not something that's unique to me, despite the fact that one's relationship with size can feel like an intimate, utterly private thing. It's the same phenomenon that leads to things like the act of buying "goal weight" clothes, and that act being encouraged by other people, even those who mean well. When most of media, and even friends and family, are implying that you'll be happier at a smaller size, it's easy to believe it — and to prevent yourself from believing you're bigger.

Saying I didn't like jeans was a way for me to avoid them altogether, and to trick myself into thinking that I was smaller than I actually was. If I didn't have to size up, then I could still hold onto being a 12 instead of a 14, or a 14 instead of a 16. Recently, I participated in a denim shoot where I had to try on two pairs of jeans — one with stretch, one without. I was terrified that the jeans wouldn't fit me, and did end up having to size up in one of the pairs of denim. But once I was in the bigger jeans, I realized that I actually felt good. I was in a situation where I had no choice but to put on the bigger size, and the world kept on spinning. And it suddenly dawned on me that I didn't have to hate being a bigger size — or the jeans.

I grew up believing that needing a larger size was bad. That when clothes felt tight it was a sign something was wrong with me. So, looking back, I see my hatred of jeans for what it was, which is me hating my body at any size other than its smallest. But it took those pair of jeans for me to realize that my body (and everyone's body) can always be smaller. So, if I spent my whole life believing I would be happier at a smaller size, then I would simply never be happy. It hit me that I could either feel OK as I am now, in this moment, or I would spend my whole life being miserable, uncomfortable, and self-conscious.

Now when I try on jeans and they're too small, or too short (and they very often are), I give myself a moment to breathe. Before, these moments were a sign that I was failing at the lifelong mission of shrinking myself. Now? I just look at it as a sign that maybe I should have just try on a different pair of pants.

More like this
I Tried Kendall Jenner's No-Pants Look As A Plus-Size Woman
By Sarah Chiwaya
8 Bennifer Outfits That Stand The Test Of Time
By Avery Matera
The Internet Can’t Get Enough Of Viktor & Rolf's Upside Down Dresses
By El Hunt
Kim Kardashian's Destroyed Flare Jeans Are Straight Out Of 2017
By Alyssa Lapid
Get Even More From Bustle — Sign Up For The Newsletter
From hair trends to relationship advice, our daily newsletter has everything you need to sound like a person who’s on TikTok, even if you aren’t.