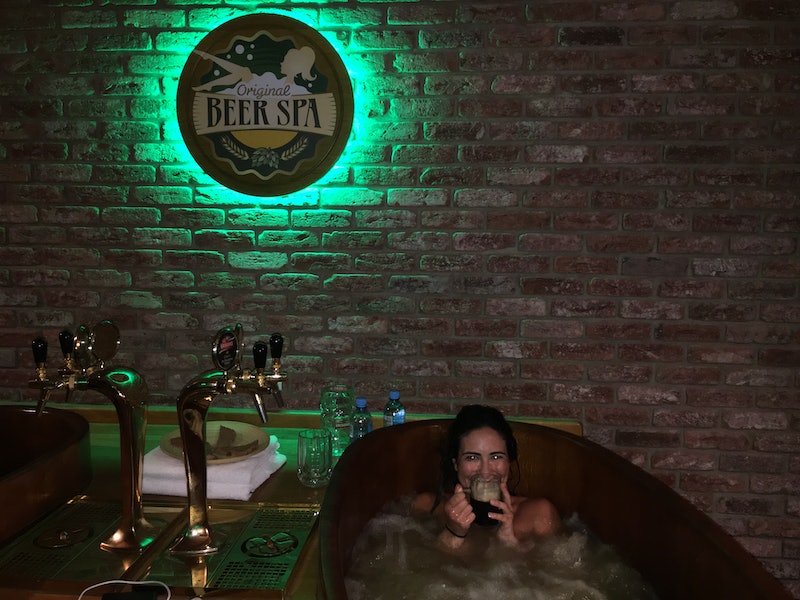 When you think about taking a boozy bath, wine is the obvious choice. Light a few candles, pour yourself a glass of Merlot, take out a book... you know the drill. But in Prague, where beer is king (fun fact: The Czech Republic consumes more beer per capita than any other nation in the world), it's a whole different story. Enter: The Beer Bath.

"Beer spas," which offer beer-based beauty treatments that claim to be good for your hair/skin/general well-being, have been popping up all over Prague in recent years. While traveling to the city last month someone told me I "had to" try it, and considering I've never met a bath I didn't like (except maybe that one time I took one in volcanic sand) I figured, "why not?"

When in Prague, right?

To be clear, these beer baths aren’t exactly the same as what pours out of a keg on a Saturday night — think of it more like a deconstructed version of your favorite liquid gold. They utilize all of the different extracts that go into making beer, including brewer’s yeast, hops, malt, water and just a little bit of booze.

According to Beer Spa's website, "The high content of hop oils helps open pores and contributes to overall vitality; the high doses of vitamin B and active enzymes in brewer's yeast have a salutary effect on skin regeneration.” They tout the benefits of the treatment to include the soothing effect on the skin, hair, and muscles, easing of muscle tension, detoxification, cleansing of pores, and the treatment of psoriasis, acne, and cellulite.

According to the experts, though, this may be a stretch… at best.

"I cannot confirm that any of those claimed health benefits are legit,” says Dr. Jeremy Fenton of Schweiger Dermatology Group. "I believe there is some theory to support the possibility that they may exist, but there is certainly no definitive scientific evidence to support them."

"Beer is made from grains that do contain antioxidants and polyphenols which can have health benefits,” he says, confirming that some studies have shown that these compounds can be anti-bacterial, anti-oxidative and anti-inflammatory. “It is possible that applying these compounds topically — either in a cream or by soaking in it — could be beneficial to your skin. There just are no good quality clinical studies that can support the benefits of beer bathing."

As anyone who’s ever attended a frat party knows, boozing hard can make you inflamed and dehydrated, which is obviously not-so-good for your skin. In fact, there are literally products made specifically for making your hangover skin look less awful, which doesn’t exactly help with the whole “beer is good for your complexion” argument.

Still, I figured it was worth a try.

I booked a 60-minute treatment at The Beer Spa that included a soak in the tub, unlimited beer to drink, and time to relax in a “straw covered bed” after the treatment (which, by the way, didn’t sound at all relaxing to me). I brought my boyfriend/photographer along for the experience, because I figured that drinking in a bathtub with him would be much more fun than doing it alone.

We hopped in (pun intended) to the barrel-shaped bucket o' beer, and proceeded to make good use of the bathtub-side keg tap — which was basically like a swim-up bar, but better, because there was no actual swimming required. We got tipsy pretty quickly, pouring the beer on our heads to see what it would do to our hair, and also because it was just entertaining. I wanted to give myself the full experience, so I went fully under-beer a few times, which wasn’t prohibited, but wasn’t exactly encouraged.

We completely lost track of time and forgot to get out of the bath and hang out in the hay, so by the time our hour was over, we were equal parts pruny and #lit.

After the fact, my skin was as sticky as the floor of a bar bathroom and my skin was covered in hops. I opted not to shower before bed to let the yeasty-goodness soak into my skin and hair, and woke up the next morning smelling the exact same way my house in college did the morning after a big party (read: disgusting.). My sheets reeked of stale beer, and went straight into a double wash cycle.

Did my skin feel any different than it had the before the beer bath? Honestly, no. It was pretty much the same as always, save for some rather unpleasant sticky-ness and stinky-ness. But, rather surprisingly, my hair was a whole other story. For the next two days, my highlights looked more golden than ever, and my whole head looked shiny and moisturized. As it turns out, washing your hair with beer is legit, but it doesn’t require a spa appointment or a keg-shaped bathtub to get results. Safe to say this isn't the last time I'll be dumping a beer on my head, though I admittedly thought those days were over when I graduated college.

Aside from the occasional hops-infused hair treatment, my at-home bath time routine of choice will continue to be more "Chardonnay and candles" than "Bud Light in a Barrel." Now, how do I get one of those bath-side taps installed in my bathroom? Preferably with options for red, white and rosé, please.

More like this
Is It Actually Bad To Cut Your Cuticles?
By Stephanie Chon and Paris Giles
How Skin Care Experts Are Stepping Up To Support Transgender Patients
By Audrey Noble
This K-Beauty “Wrinkle Bounce” Stick Is Going Viral On TikTok
By Destiny Knight
Meet Foreverist, The Skin Care Brand That Keeps Tattoos Looking Fresh
By Audrey Noble
Get Even More From Bustle — Sign Up For The Newsletter