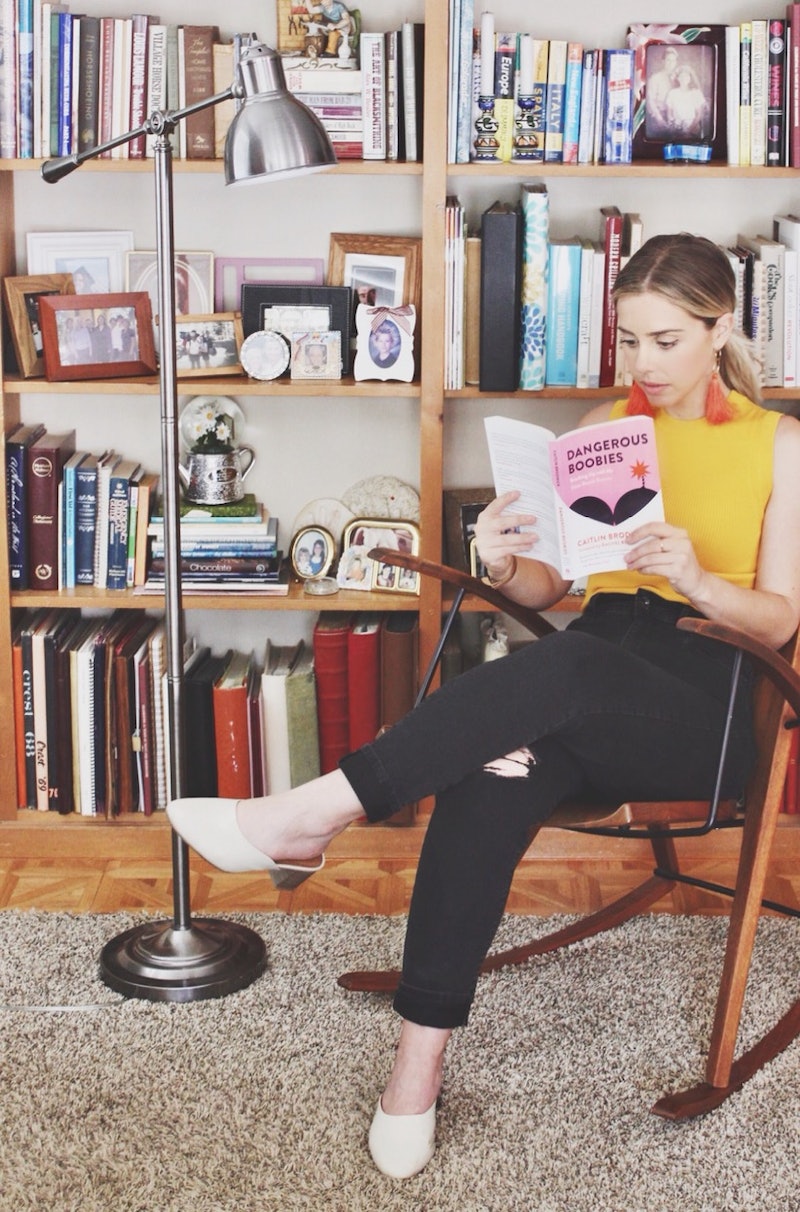 In Bustle’s Braving BRCA column, writer Sara Altschule shares how she discovered she has a BRCA gene mutation — and how she's moving forward.

I never thought about whether or not I'd be at risk for breast cancer. No women in my immediate family had dealt with it, so I thought I'd be in the clear. That completely changed when I got an email from 23andMe five months ago saying they were now FDA-approved to tell you if you have one of three breast cancer susceptibility gene (BRCA) mutations that you can be tested for, which are most commonly found in people of Ashkenazi Jewish ancestry.

I’ve always heard of gut feelings, but this was the first time I’ve truly felt mine: I knew as soon as I got that email that I needed to take this test. My dad’s cousin, Susan, who passed away of ovarian cancer and who'd had breast cancer previously, was BRCA 2 positive — meaning she'd tested positive for the BRCA 2 gene mutation. And when I finally received my official report, it showed that I had the same exact BRCA 2 mutation as Susan did.

There are no real words to describe the feeling when you find out something like this at 30 years old. I can tell you that for me, it felt something like this: anxiety, anxiety, and more anxiety. Not only are you worried about your potential risks of developing cancer (or if it's already developed), but you feel this urgent need to make a decision about your next steps. Surveillance? Not sure yet. Surgery? Not sure yet. Overwhelmed? Absolutely.

So I started digging to find out more information about this mutation. According to the National Cancer Institute, “BRCA1 and BRCA2 are human genes that produce tumor suppressor proteins.” These genes actually help fight against cancer, and everyone has them. But for people who are BRCA-positive, like me, it means that these genes are mutated, and their chances of developing certain types of cancer are increased. The National Cancer Institute states, “About 12 percent of women in the general population will develop breast cancer sometime during their lives." But for people who have a BRCA gene mutation, their chances (and mine) of developing breast cancer by the age of 80 is approximately 69 to 72 percent. More recently, I’ve read studies that put those percentages even higher. Oy vey.

Having the mutation also increases a woman's risk of developing ovarian cancer. For the general population, the lifetime risk is less than 2 percent. But, according to the Susan G. Komen Foundation, the risk for women with a BRCA 1 mutation is 35 to 70 percent and for those with a BRCA 2 mutation, it's 10 to 30 percent.

Men also have an increased risk of certain cancers if they have the mutation, so it’s important for everyone to get tested, not just women. According to Facing Our Risk of Cancer Empowered (FORCE), men with BRCA mutations have an increased risk of developing breast cancer up to 10 percent and a lifetime risk of prostate cancer of 15 to 25 percent.

Obviously, these numbers can be quite scary — make-you-want-to-cry-for-weeks kind of scary. But beyond the statistics, I have the ability to beat cancer before it beats me. Knowledge is power. And with this information, I am able to make powerful decisions that can ultimately save my life.

Even though I’m Ashkenazi Jewish, I had never once been told by a doctor that I should think about getting screened for the mutation. But now knowing that my risk is 1 in 40 because of my ancestry, it’s shocking to me that more people aren’t talking about this. Once I found out from taking that DNA test, I followed up with a genetic counselor and confirmatory blood test. It’s significant to note that some DNA kits can only test for three specific BRCA mutations. A more comprehensive panel may be better suited to evaluate for more mutations and other susceptibility genes.

If you're concerned that you might also have this mutation, there are a few things, (actually, a lot of things) that you should know. According to the National Cancer Institute, there are signs that the BRCA mutation could run in your family, and if so, you may want to get tested. When looking for these signs, you're going to want to turn to your family medical history on both sides. For example, if you've ever had a family member with ovarian or fallopian tube cancer, breast cancer at age 50 or below, triple negative breast cancer, male breast cancer, or if you're of Eastern European Ashkenazi Jewish descent, you may want to consider genetic counseling. (Genetic counseling can help you understand your potential inherited cancer risks.)

Another important factor to consider is this: Are you ready to find out? Finding out that you are BRCA positive is like opening Pandora's box. You can’t unsee this information — and trust me, I’ve tried. And knowing that you have an increased risk of getting cancer isn’t something you can easily table for another day. It’s important to be prepared if you see that potential “positive” on your results.

This is just the beginning of my BRCA story. It's been a pretty tough pill to swallow. If you would have told me at the beginning of this year that I would be writing a column on BRCA, I would have thought you’d got the wrong gal. But I like to think of myself as a "glass half full" kind of person. And currently, my glass is filled with hope — hope that I'm making decisions that may one day save my life.