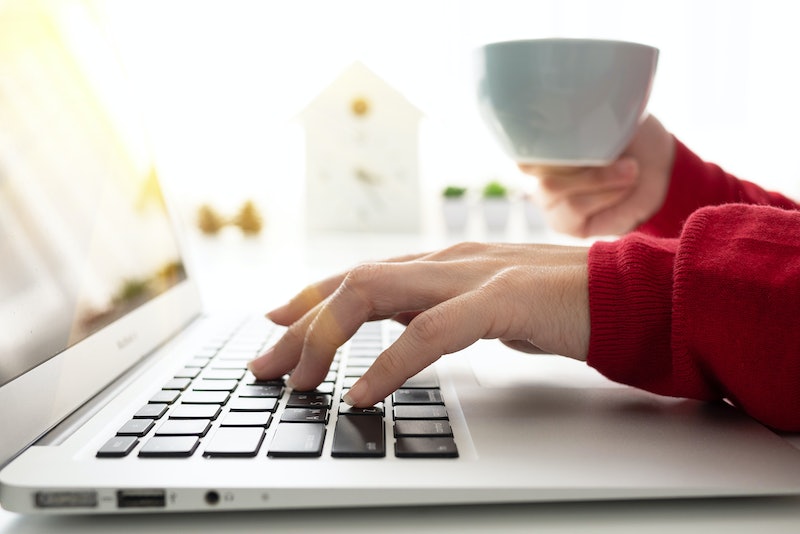 In the summer of 2014, my editor passed on my 7th book. I was on vacation with my family in a small beach town along the California coast at the time. It was a truly beautiful day to be rejected.

We were standing outside of the Brown Butter Cookie Company about to go in, when I saw that my agent was calling, I told my family to go in without me. I sat in my car alone and – it’s one of those moments you think you can prepare for. That you’ll know how you’ll react. I’m going to be so sad or going to be so angry or I’m going to rend my garments and sob. But I didn’t do any of those things. I just dully nodded along. I was officially out of contract.

In the desperate last wheezes of that conversation, I blurted out a new book idea. It was my "In-Case-of-Emergency-Break-Glass" idea. My debut novel, Conversations with the Fat Girl, had been my bestseller. I’d always wanted to do a sequel, but from another character’s point of view. I knew no more than that. So, I rattled off a couple of books that were in the marketplace at the time and suggested that tonally mine could go in either column. I had no preference or opinion. I awaited her response. My voice sounded distant and flat. There was this silence on the other end of the phone. Not a good silence. I hadn’t awed her. Then, my agent gave me the best worst advice ever, "I think you need to dig deeper." This is not the advice someone who’s emotionally shutting down ever wants to hear.

We hung up the phone and I just sat there. Numb. I started looking for a day job immediately.

How did I get here? I don’t remember a time when I wasn’t writing. Stacked spiral notebooks littering any available surface, old floppy disks filled with tragic short stories lovingly archived, and backs of envelopes filled to bursting with sparks of illegible — yet clearly genius — ideas.

This is not the advice someone who’s emotionally shutting down ever wants to hear.

I was a writer before I even knew what kind of person I was. I was a writer, so I could become the person I am. But, as writing became my career, being a writer wasn’t enough. I needed to be a real writer.

I’d naively thought once I’d gotten an agent, and certainly after I’d sold the first book, I’d feel like a real writer. But no matter how many goals I achieved, I never felt that click. So, I became desperate to amass as many gold stars as I could, thinking it was surely the next, bigger, more elaborate achievement that would finally transform me into The Cool Kid Who Belonged.

There was a reason I didn’t and couldn’t "dig deeper." There was a reason my writing had become shallow. Writing has a tendency to know when we are hiding something. And underneath the questions about whether or not I was a real writer hid an even bigger question: Was I ever going to be good enough?

See, I was ready to be called out as a fraud by publishing. I’d been waiting for that shoe to drop for eleven years. I’ve been Employee of the Month in the Imposter Syndrome Office since its inception. What I wasn’t ready for was to hear the hollow death rattle of my own voice as I desperately pitched a book around a beloved character universe that I only cared about as long as it granted me access back into a club in which I so badly needed to belong.

But, I was desperate. So, I dug… far, far away from my own mental street fight and broke ground "safely" inside the world of what became my seventh novel, The F Word. I thought Olivia Morten (the main character) was different enough from me that I could get back in the writing saddle, but still manage to keep a safe distance from the violent tectonic plates that stirred dangerously below. I strategically tiptoed, as my writing stunk of fear and my newfound day job became less and less temporary. But, I kept showing up. Kept sending revisions to my agent. Kept surgically digging. And in March of 2015, eight months after that fateful day on the California Coast, we finally sold The F Word to my dream editor and my dream publisher.

But, the ground had begun to shift under my feet. Even the most careful of digging had made things… unstable. The demand to know why I thought I wasn’t good enough was getting louder. Why didn’t I feel like a real writer?

And in the bleak days, weeks, months and years of "digging deeper" that followed, it became abundantly clear that I’d come to define success in publishing as meaningful and writing as meaningless.

As a side note, I’d like to put in a request that "digging deeper" be more about me hiking* (*taking a train, who are we kidding) through the Scottish Highlands as I try to grapple with why Keanu Reeves loves me so much.

Turns out, that’s not quite how it works. It’s more of a scorched earth kind of classroom where my bi-weekly therapy sessions cycle through angry tears, sardonic "banter" and grunted acknowledgments of unhealthy patterns. I’ve downloaded meditation apps, taken up pilates and am currently on my third go-round of The Artist’s Way as I continue to take myself apart brick by brick.

...it became abundantly clear that I’d come to define success in publishing as meaningful and writing as meaningless.

Just this past weekend, I sent out an email to my writer’s group that I was going to be planted at a local coffee shop if anyone wanted to join me.

As the day wore on, I was joined by the other two people in the writing group who had had a string of similarly awful years. All three of us had had some version of getting the rug pulled out from under us or as one friend called it, "beaten over the head by my own dream."

These were the same people who’d shown up over those bleak days and weeks and months and years that followed that conversation with my agent. We’d sit across coffee shop tables from each other hollow eyed, teary eyed, rage filled, pathetic and pitiable, obstinate and arrogant, our computers open and documents too long left blank and mocking. Taking our headphones off only long enough to ask — who do they think they are and I’m never going to write again and you know what, I’m just being super breezy and am gonna take a break from writing and I wouldn’t say I was blocked I’m just… and then we’d stare off into the middle distance unable to put what we’re feeling into words… the irony of which, as writers, was not lost on us.

But, this past weekend we were all working on the projects that were forged in that crucible of failure. I was working on my eighth novel, The Nobodies. A book that’s about starting over and how failure makes you feel like a stranger to yourself. It was an idea plucked from the still smoking rubble of the now gaping maw of a faultline where all this digging started.

Scared and overwhelmed with what I found as I dug deeper, it was writing that was the strong hand reaching down from the edge of the cliff.

It wasn’t pretty, it’s been a long five years and I honestly don’t know how many more dinners I can survive with “friends” resting their faces in their hands in faux-excitement as they ask me, "So, are you happy?"

'The Nobodies' by Liza Palmer

What I want to tell them is that I don’t know if I’m happy, but I do know that I’m… real.

That I finally get what the Skin Horse was talking about in The Velveteen Rabbit when he said, "It doesn't happen all at once. You become. It takes a long time. That's why it doesn't happen often to people who break easily, or have sharp edges, or who have to be carefully kept. Generally, by the time you are Real, most of your hair has been loved off, and your eyes drop out and you get loose in the joints and very shabby. But these things don't matter at all, because once you are Real you can't be ugly, except to people who don't understand."

Because what I finally realized was that to be a real writer, I must first have the courage to be real.