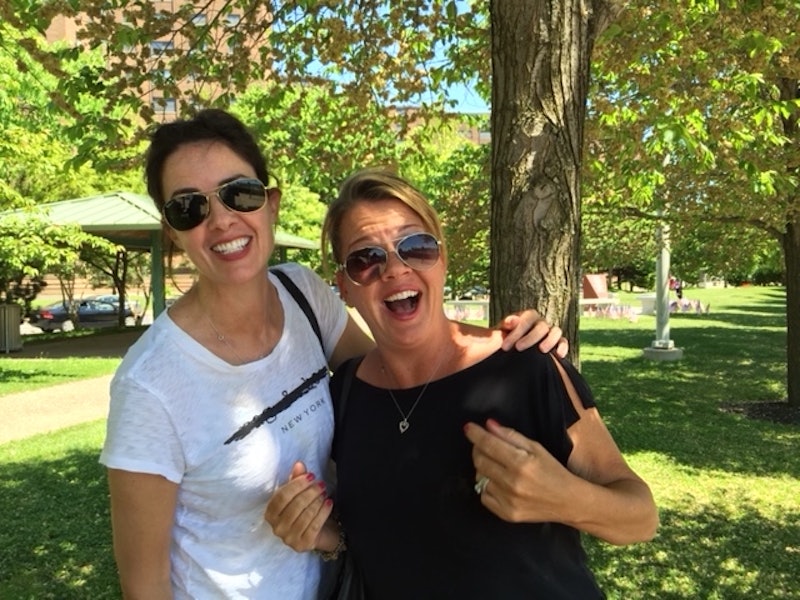 I didn’t know much about the opioid crisis until July 2, 2017, when my sister Colleen called me and asked that I come home to Buffalo, New York. Our youngest sister, Jenny, was in the hospital and had just been revived with Narcan (naloxone), a drug used to reverse opioid overdoses. I didn’t even know that my sister, a 44-year-old, college-educated suburban mom, had been abusing opioids.

The next morning, I arrived at the hospital, impatient to get Jenny discharged. I assumed we were at the beginning of a long, difficult, and expensive recovery process for Jenny, and I had already called a treatment center in upstate New York to get her a place there. But as I approached Jenny’s hospital room from the long hallway, I could hear my sister before I saw her. She was moaning, asking for something over and over again: Dilaudid, a synthetic opioid.

As I entered Jenny’s room, she barely resembled the person I had seen at Christmas a few months earlier. The whites of her eyes were an awful jaundiced color, with clear liquid bubbles all over her eyeballs. Her legs were bones; her skin was an unnatural yellow-maroonish color. She was in and out of lucidity and never stopped moaning. She had a nicotine patch on her arm, which struck me as absurd.

I had no idea my sister was so sick. I didn’t understand how such a radical decomposition could have happened so quickly.

For the first two days in the hospital, I was vigilant and hopeful. Colleen and I tried to get Jenny to drink Ensure and talk to us when she was awake. Sometimes we sang. Jenny loved to sing. We watched movies and recited funny one-liners from her favorites, like Forrest Gump. I kept saying, “I love you, Jenny” like Tom Hanks says it in the movie, and I was ashamed to realize I couldn’t remember the last time I told my sister I loved her.

We are a close family, but have never been physically affectionate. That week, I held Jenny’s hand a lot and touched her hair. I don’t think I had ever touched my sister’s hair before. Now, I still feel the sensation of it on my right hand all the time.

Colleen and I slept at the hospital every night, getting up every 45 minutes to help Jenny go to the bathroom. This was gut-wrenching for me: watching my sister on the portable toilet in the dark when we couldn't make it to the regular bathroom, looking up with those eyes. She was embarrassed, even in her medicated end state.

I experienced the entirety of my sister’s addiction, struggle, and death in just six days. But in reality, she’d been dying for a long time right in front of us.

Jenny never left the third floor of the hospital. After four days, she moved down the hall into a hospice room after asking us in disbelief, “Am I going to die here?” I had to leave the room as Colleen, a registered nurse, answered her. Jenny died of cirrhosis of the liver from alcohol and opioids two days later, with my parents on each side of her bed, holding her hands. My mom had a baseball cap on. I never saw her cry. My dad, a Vietnam combat veteran and Bronze Star recipient, was silent. It was so quiet. Colleen and I sat at the foot of the bed, looking at a perfectly framed picture of Jenny and our parents as she took her last slow breaths, a picture I'll never be able to unsee.

I experienced the entirety of my sister’s addiction, struggle, and death in just six days. But in reality, she’d been dying for a long time right in front of us.

Every day for the past year, I have tried to understand how my sister died without my family ever having an honest conversation about drugs and alcohol. She didn’t do a single stint in rehab. We never had an intervention or talked about treatment. How did this scourge sneak up on us?

My two sisters and I grew up in a middle-class home in Buffalo, with many advantages. My parents are hard-working, humble, and very private people who will celebrate their 50th wedding anniversary this year. As adults, my sisters and I saw each other regularly. We went on “sister vacations” every few years to someplace warm, where we’d sit on the beach, talk, and laugh. We’d laugh a lot.

I would describe Jenny as smart and athletic with a quick sense of humor. But about five years ago, I began to suspect she might be drinking too much, because she had noticeable symptoms like shaking hands. She was also becoming reclusive — she stopped working, had very few friends, and rarely went out. Around the same time, she had surgery (for which she received pain medication), and she and her husband of 15 years began a stressful separation.

When I tried to talk to Jenny about her health, she insisted she had the “best doctors in Buffalo” (which she did!). She assured us she had stopped drinking and was just taking Xanax for some anxiety.

In the five years leading up to her hospitalization and death, our family didn’t talk to each other honestly about Jenny’s health. I look back now in disbelief, wondering how this was possible. That first day in the hospital, I remember thinking it was strange that Jenny wasn’t surprised or scared to see that both Colleen and I had travelled home to see her, but we all talked by her bed as if she had just broken her arm or needed her tonsils removed. Only now do I understand how addiction ravages families with secrets, denial, lies, and shame. Though my parents believed Jenny, I had suspicions, but I assumed she was in good medical care with her doctors.

That was a mistake that I will regret for the rest of my life.

And as soon as I got the call last July, I realized all my suspicions were right. My sister had lied to us for years, drinking and taking prescription medications, culminating with frequent trips to her local emergency rooms for generous doses of Dilaudid.

We rationalized her textbook symptoms and accepted her explanations rather than facing the truth: my sister had a drug and alcohol problem and was lying to us about it.

I’ve learned from books like Sam Quinones' Dreamland that the opioid crisis has roots in the 1990s, when doctors were beginning to treat pain more aggressively, and OxyContin was pushed as a non-addictive pain medication. But, as a 2018 New York Times report revealed, Purdue, the pharmaceutical company that created OxyContin, was well aware by 1996 that early users engaged in “significant abuse” of their drug. (A spokesman for Purdue told the New York Times in 2018 that "Suggesting that activities that last occurred more than 16 years ago are responsible for today’s complex and multifaceted opioid crisis is deeply flawed.")

This, combined with an enormous influx of black tar heroin from Mexico, spawned massive waves of addiction in rustbelt communities, where patients who suffered from chronic pain became addicted to opioids while simply following their doctors' orders. For many, when prescription opioids were no longer accessible, this led to heroin addiction.

22 million Americans have substance use disorder, yet just 10 percent get treatment.

In Dopesick: Dealers, Doctors, and the Drug Company that Addicted America, Beth Macy’s definitive history of the crisis, Macy claims that the actions of Purdue Pharma, as well as lobbyists, drug distributors, lawmakers, and “pill mills” that dispensed large quantities of prescription drugs for cash, resulted in crises in small towns like Kermit, West Virginia — which has a population of 392 residents, who collectively received 5.7 million hydrocodone and oxycodone pills between 2005 and 2011.

Today, 46 percent of American adults have a family member or close friend who struggles with addiction. Millennials are dying at such high rates it has driven life expectancy in the U.S. to decline for two years in a row, for the first time since the early 1960s; the emergence of the synthetic opioid fentanyl, 50 times more potent than heroin, is partially to blame. An estimated one in five deaths among U.S. adults ages 25 to 34 are related to opioid use according to the Journal of the American Medicine Association.

Since Jenny’s death, I feel an overwhelming sadness and almost debilitating guilt that I did nothing to help her.

And while my heart is broken, I am also so angry.

I’m angry with Jenny for not getting help. I would have done anything for my sister, but she never asked. I’m angry at myself for not being more educated about substance use disorder. But I’m apoplectic at doctors who freely gave my sister an uncoordinated cocktail of drugs including Dilaudid, Xanax, and Topamax for years.

Doctors also didn’t effectively diagnose Jenny's substance use disorder, and they never encouraged medication assisted treatment (MAT), in which FDA-approved drugs that reduce withdrawal and drug cravings are prescribed in tandem with counseling. Getting effective help with substance use disorder is often a major struggle, because until recently, medical schools offered little training in addiction medicine. Additionally, many who are struggling don't have insurance, or their insurance won't cover treatment. Private treatment facilities average $30,500 for a one month stay, making it not an option for most of us. It certainly wasn’t for my sister.

And the needed money is not being properly allocated. In October, Congress proposed an opioid bill with $8.4 billion of funding (a fraction of what’s needed given this problem the estimated to cost $504 billion in 2015).

These are all factors in why 22 million Americans have substance use disorder, yet just 10 percent get treatment.

But the most lethal factors are shame and stigma, because they enable this disease to quietly metastasize across the country. While doctors and experts know addiction is a chronic illness, like diabetes or asthma, much of the public — and some in government — still view it as a moral failure.

I’m not ashamed of my sister for having substance use disorder. But I'm so ashamed of myself for not being educated about it sooner.

Medical experts and researchers know what is needed to fight back against the opioid crisis: increased access to a variety of treatments as well as naloxone (Narcan), harm reduction efforts like needle exchanges, education to destigmatize substance use disorder, policies that make it harder for prescription opioids to be abused and illegal opioids to enter the country. Innovative, evidence-based solutions are happening at the state and community level all over, thanks to dedicated individuals. We know how to fix this. We just need the political will to do it.

This gives me hope.

Right up until she died, Jenny denied having a problem, despite having two exhausted sisters shuffling her, with stick legs, to the bathroom in a dark, smelly hospital room all night long. I guess that’s what we do in the end for the people we love who have this disease: the sad, painful, kind things to give them some dignity and comfort. We take them to the bathroom, clean them up, touch their hair, feed them, sing. We laugh and cry. We finally say all the things.

I think my sister was in denial about her substance use disorder — or maybe she was ashamed. I’ll never know for sure. Jenny fully expected to go home from the hospital that week, saying in frustration, "What, is this my deathbed?"

It’s been more than a year now, and I still wake up every day and can’t believe one of my sisters is dead. That week in July, I tried to say goodbye to my little sister: “I love you I'm sorry next time I’ll do better I promise just give me one more chance…” But there’s no second chance for me.

I’m not ashamed of my sister for having substance use disorder. But I'm so ashamed of myself for not being educated about it sooner.