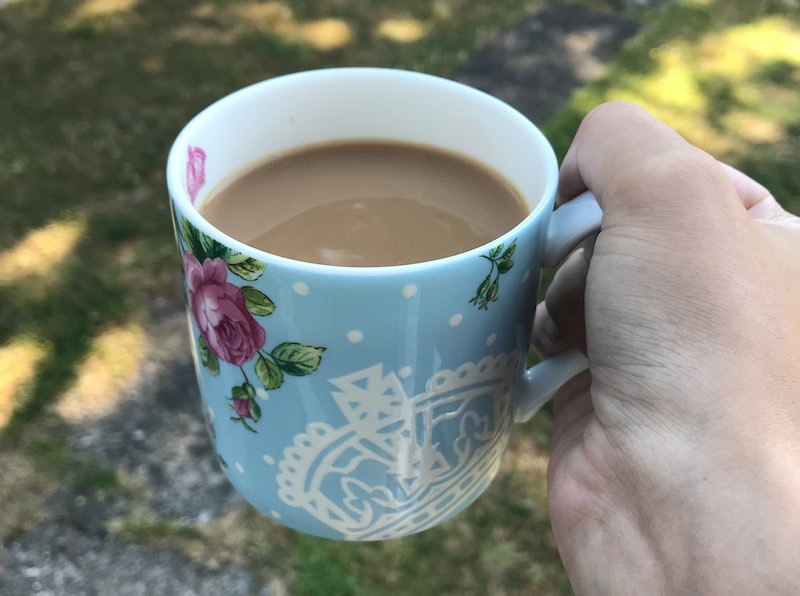 There are plenty of old wives' tales when it comes to science. And with the internet full of inaccurate information, it can be hard to know what to believe. That's exactly why I decided to test out one strange-sounding theory. Instead of downing cold drinks, I drank hot drinks during the heatwave to see if they really can cool your body down.

While widely reported as an old wives' tale, there is now some science to back this claim up. The most notable study in support of the idea was published in 2012 in the Acta Physiologica journal. Researchers studied cyclists in a lab environment, asking them to drink water ranging from 0˚C to 50˚C in temperature as they pedalled. Each cyclist was fitted with a number of temperature-monitoring sensors and a mouthpiece which detected the amount of oxygen and carbon dioxide taken in and produced. This, in turn, gave a good indication of the heat produced by the body.

Unsurprisingly, they found that drinking the hottest water raised the body's internal temperature. However, it also caused the cyclists to sweat more, resulting in an evaporative process that actually cooled the body down.

Anthony Bain, a PhD candidate at the University of British Columbia, and expert in heart, lung, and vascular health who worked on the study, explained this process more thoroughly to The Cut:

While more sweating didn't sound ideal to me, I decided to give the whole hot drinks thing a go for a few of the hottest days the UK has experienced so far. Considering some of the world's biggest tea drinkers, according to The Atlantic, live in rather hot (and even desert) climates, I figured that there must be some truth to all of this.

Full disclaimer: I'm not actually a huge fan of many hot drinks. I barely drink one cup of tea a day and detest coffee, leaving me with little in the way of options.

However, I was determined to stick to the plan. So on the first day of this particular experiment, I got up and put the kettle on instead of reaching into the fridge for my usual glass of orange juice. The day was particularly sticky; so much so that any piece of clothing felt like a heavy burden. My mouth could definitely be described as drier than the Sahara.

I downed the cup of tea pretty quickly and patiently waited to feel its effects. Aside from the initial taste, I'll admit that it didn't make me feel any hotter. But I can't say that it made me feel cooler either. Maybe it's because I spent the day working inside so I wasn't dripping with sweat. Or maybe this hot drinks theory is a load of rubbish.

But onwards and upwards. The next day, I had to get in the car for a two hour drive. (And if you couldn't guess, driving in 25˚C heat — even with air con — is just as horrendous as it sounds.) When I finally got there, I decided to head to a little café for some light refreshments.

Of course, everyone else was ordering smoothies and milkshakes. I, on the other hand, chose a hot chocolate because of the whole not liking coffee thing. Plus I have a real issue with paying for what always turns out to be a substandard cup of tea.

The waitress may have looked at me rather perplexed but I'm happy to say that it turned out well in the end. While my sister was complaining about being too hot, I felt just fine. So fine, in fact, that I completely forgot about the scorching sun and was able to concentrate on enjoying my day. The hot chocolate was seemingly the cure to those climbing temperatures.

I spent the next two days trying to drink tea instead of cold drinks but found myself with a dry throat that longed for some water. After finding that hot drinks were indeed not that bad during a heatwave, I read up a little more on why this is and whether a hot chocolate contained a secret cooling ingredient.

It turns out that the clothing you wear actually has some effect on whether your body is able to cool down or not. On the day I drank that divine hot choc, I was wearing a cami top and skirt. It's safe to say that a lot of flesh was on show. This may be the (pretty obvious) key to keeping cool when consuming a hot beverage.

Why? Because when your body temperature is raised by the hot drink, it produces the aforementioned excess sweat, but the sweat needs to evaporate to produce the cooling effect. If you're wearing heavy clothing or multiple layers, you're likely to be already be pretty sweaty. The aforementioned study found that drinking a hot drink in this kind of outfit is likely to produce an adverse effect as the sweat will just drip off rather than evaporate into thin air, thus not cooling you off. "The hot drink still does add a little heat to the body, so if the sweat’s not going to assist in evaporation, go for a cold drink," one of the study's authors Ollie Jay, told Smithsonian.

As for whether hot chocolate was my own personal Eureka moment, I'm still not sure. The NHS advises drinking only cold drinks in a heatwave and recommends staying away from excess caffeine. So perhaps this is why tea wasn't working so well for me.

So would I do this all over again? While I'm now less averse to saying no to a hot drink in the summer, I don't think I'll be giving up juice and water (or a nice cold pint) anytime soon.