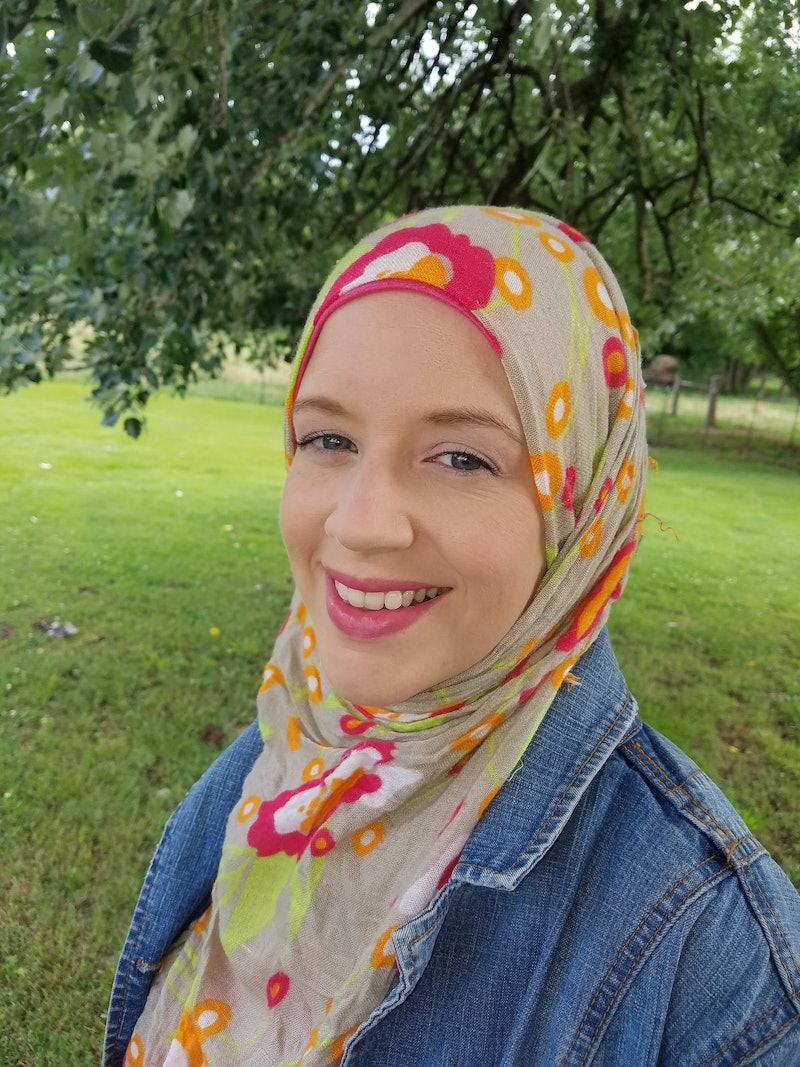 In June, Bustle is partnering with Muslim Girl to highlight the voices of millennial Muslim women as they observe the holy month of Ramadan. Read on as they share stories of how they personally observe this holiday, and why this year's Ramadan is especially significant.

As a teenager, I began to have questions about my beliefs and Christian upbringing. After 15 years of soul searching, I finally found my ‘place’ in Islam. I was incredibly excited, and immediately began learning about various Islamic traditions, especially around holidays — I was looking forward to melding my old and new religious traditions to create an easy transition. As I shared my excitement and information about Islam with my Christian family, I realized I had just missed the month of Ramadan, the Islamic holy month dedicated to fasting.

Ramadan celebrates the revelation of the Qur’an and is a way to reconnect with our faith. The fasting, which lasts from sunrise to sunset daily for 28-30 days, is meant to be not just physical, but mental and spiritual as well. That first year, I was not too worried about having missed Ramadan; instead, I was excited to prepare myself for the following year when, instead of eating, I would spend my days learning more about my new religion.

And next year, as Ramadan rolled around, I was ready. I looked forward to the sense of accomplishment that would come with each successful day of fasting. I made sure to have a meal plan. I knew exactly what I would eat before dawn to keep me fueled, and already had meals frozen so I would not have to cook them while starving after sunset. I was encouraged by and received support from other Muslims to fast, though they also reminded me that it can be hard and that I should simply do the best I could, as what mattered the most was my intentions. But I felt confident I could breeze through — it was for God, after all.

The first day, I made it all the way to sunset. I chose to read Qur’an or pray when I felt hungry and it was often enough to take my mind off of the hunger. Some of the time, I really just wanted a sip of water, but settled for brushing my teeth, careful to spit out all of the water so as to not consume it and break my fast. I felt so proud and like I could really stick to fasting the entire month.

The second day, however, proved to be much more difficult. As I reached my twelfth hour of fasting, I had an unbearable headache and nausea — and I still had four more hours to go. I chose to break my fast then. I felt really disappointed in myself for not making it to sunset, though I knew I had tried my best.

The third and fourth days went almost as well, but on the fifth day, I was barely able to make it four hours without getting shaky and dizzy. Despite eating and drinking through the night, as some had recommended, I could not do it.

Initially, I was in denial and very upset. I felt like a giant failure — like I had failed myself, my fellow Muslims, and most of all, God. I began to question my ability to live up to the requirements of Islam, period. I was worried that not fasting would make me less of a Muslim.

But after prayer and asking questions of Islamic scholars, I realized it was not the end of the world; I could make up my missed days another time. I decided to wait and try fasting again during the winter. But once again, I found that I could only make it a few hours at a time. I knew I had issues with my blood sugar before all of this, but in my research, I had learned many people with blood sugar issues not only fast successfully, but also experience positive impacts with their sugar as result. I had hoped this would be the case for me. But unfortunately, I only watched my sugar levels plummet during my fasts. I would come dangerously close to passing out.

As I realized that fasting was not good for my specific health needs, I was heartbroken — because to me, fasting wasn’t just simply about not eating, but about feeling a connection. Despite being excused due to illness, as a new Muslim, I had hoped that by taking part in fasting, I would feel a sense of unity with my new community — we were all sacrificing sustenance together to feel closer to God. With millions of Muslims observing Ramadan worldwide, some in countries with temperatures over 100 degrees daily and fasts over 20 hours long, I felt as though I was failing. How could I be a real Muslim if I couldn’t even last for a few hours? I worried I could no longer relate to anyone observing the fast.

That is when it hit me: Was I fasting to feel a connection to my soul, or to other humans?

I started to look inside myself and deepen my real understanding of Ramadan on a spiritual level, instead of an individual one. If everything happens for a reason, I began to wonder if my inability to fast was a reminder of what Ramadan was truly about — and that there are other ways to recenter oneself besides fasting. Instead of focusing on what I could do to make myself feel closer to people, I could work to feel closer to God by helping others.

I learned that I could perform acts of kindness as another way to seek the centeredness that fasting provides. I can feed the poor through donations or by working in a food pantry, and I can prepare the meals for those that are fasting to ease their burden. I can offer to make tasks easier for those who are fasting so that I can ease their spirituality, too. I have found that helping my community has helped me to finally find the connections I had been looking for.

This month is my third Ramadan. Although I do not fast from food, I still strive to embody everything that Ramadan stands for. I can use this time to learn, do good deeds for others, and even for myself. I use this time to be more mindful of my anger and the intentions in my actions, creating a clean slate for the year ahead. I build my children’s excitement for Ramadan and all it has to offer. Had I been able to fast, I may have continued to be selfish, focusing on my own accomplishments versus the gifts and mercy of God. My inability to fast allowed me to finally understand the selflessness Ramadan encourages.