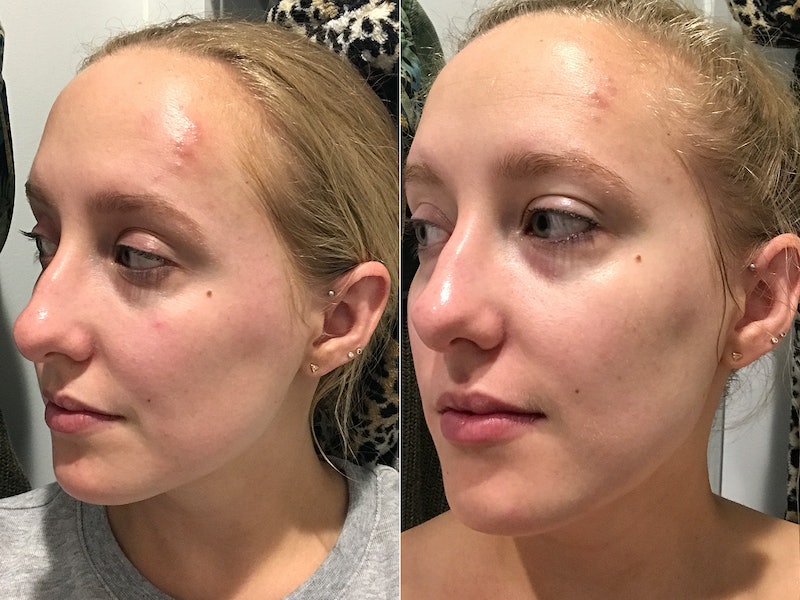 As a person in my late 20s, getting a chemical peel is something that's been recommended to me by beauty publications, friends, and coworkers alike. However, the treatment has always sounded utterly terrifying to me. I've seen that Sex and The City episode; I'm in no hurry to have my face flake off like a terrible sunburn if I haven't even had the pleasure of reading on a beach all day first. But, according to a study by the American Society Of Plastic Surgeons (ASPS), over 1.3 million people got chemical peels in 2016 — about 16,000 of them were in my age group — so I figured there had to be something worth testing.

For my maiden chemical peel voyage, I went to Dr. David J. Goldberg, a NYC-based dermatologist with the Skin Laser & Surgery Specialists of NY and NJ. After looking at my face, he tells me that I'm "not trying to help wrinkles ... you're trying to make your skin look healthier" which means I'm a great candidate for a light, PCA SKIN chemical peel. According to the ASPS, these types of lighter peels often "include combinations of alphahydroxy acids and beta hydroxy acids, such as glycolic acid, lactic acid, salicylic acid and maleic acid" — all ingredients you've likely seen in lower percentages on the skin care products in your bathroom before.

So, I took the metaphorical plunge into the acid pool. Here's everything I learned in the process.

If you've ever seen post-peel photos where it looks like the patient's skin is falling off, it's understandable that you'd be hesitant to get a peel yourself. However, as Dr. Goldberg assures me before I undergo the treatment myself, this is rarely the result of a good peel anymore. "[Thirty years ago] there were these peels called phenol peels, and they looked horrendous," Dr. Goldberg says. "People ended up with whitened skin. They had to be on cardiac monitors."

Luckily, these days, the peels are much more gentle, but just as effective. "Sometimes you get a little peeling [with modern peels]. Sometimes you get no peeling at all because they're essentially fruit acids," Dr. Goldberg says.

There Are Several Types Of Peels

Back when peels would basically mean removing the top layer of your face, the most common peel was the aforementioned phenol, according to Dr. Goldberg. These days, there are several types, but trichloroacetic acid (TCA), lactic acid, and retinol are the most common. You should consult with your dermatologist to find out which is best for your skin needs. For my own treatment, esthetician Aline Soto used three PCA peels (Sensi Peel, PCA Peel HQ Free, and Ultra 1) which are a combination of varying percentages of lactic acid, TCA, kojic acid, azelaic acid, arbutin, vitamin C, and salicylic acid.

Almost Anyone Can Get A Peel

As long as you stick to a gentler peel, pretty much any patient is a candidate for the procedure. "Part of the issue with [skin care treatments] on darker skin is that you can't get too aggressive," Dr. Goldberg says. Harsh treatments can cause hyperpigmentation, especially in people of color, but Dr. Goldberg assures me that using softer peels over the recommended period of time shouldn't cause any problems.

The only times you shouldn't get a peel? If your skin is already flaking because it's so dry, or if you have open wounds or sores on your face.

You Can Start Getting Peels In Your 20s

Since peels of the past were so traumatic, people would rarely get them before they turned 50, Dr. Goldberg says. These days, the gentler formulas mean patients can start using them as early as their 20s, if they want. "If you start doing these light peels in your 20s and 30s, you're going to keep your skin healthy for the rest of your life," Dr. Goldberg explains.

A week before my peel, the dermatologist's office requested I stop using any retinol or products with hydroquinone. These types of ingredients can make your skin extra sensitive, which will only be exacerbated when combined with a chemical peel.

The Peel Stings... A Lot

I've previously used products that contain lower percentages of acids like glycolic and ascorbic, so I'm used to a little tingling with my skin care routine. The peel Soto used on me started out without much sensation, but the final layer of acid — which included a 20 percent lactic acid and 10 percent TCA, compared to 12 and six percent in the first layer — caused a pretty intense stinging for me. It felt similar to a really bad sunburn or getting a tattoo, but only lasted for about a minute. After Soto put the soothing moisturizer and sunscreen on (and fanned my face a little, as show in this photo), the pain completely vanished.

Aside from the final, most intense layer, the rest of the process feels a lot like a lovely, relaxing facial. Your dermatologist's office probably won't play any ambient music or light lavender candles, but the esthetician applies the products in a way that feels like a mini face massage. Don't I look relaxed?

The photo on the left is my skin immediately before the peel began. On the right, you can see my skin immediately after. There's almost no redness, and so much glowiness. The end-of-day bags under my eyes also appeared to be reduced, which was a bonus side effect I wasn't expecting.

You Should Follow Your Dermatologist's Recommended Skin Care Routine Post-Peel

To get the full benefits of a peel, you'll want to keep taking good care of your skin after you leave the office. Your dermatologist will recommend a skin care routine, and likely give you samples of the products to test before you make any purchases.

Sunscreen will pretty much be universally recommended, as the acids used in the peels will make your skin extra susceptible to sun damage. In addition to SPF, I was sent home with a gentle face wash, vitamin C serum, hyaluronic acid serum, peptide-based eye gel, retinol for sensitive skin, a calming moisturizer, and a purifying face mask, all made by PCA Skin.

With the type of peel I got, there was zero downtime — my skin just looked extra glowy when I got up from the bed. However, my skin did start flaking about three days later, which Dr. Goldberg told me was likely to happen. As you can see in the photo above, it basically just looked like super dry skin.

It Seriously Helps With Acne

I'm typically not an pimple prone person, but I got a fun eruption of acne on my forehead a few days before my peel appointment. I had tried rubbing your typical spot treatments on my face, but the blemishes just weren't getting any smaller. Soto spent a little extra time with the second layer — PCA Peel Hydroquinone Free, which includes 12 percent salicylic acid — on the blemish area, and they started to go down immediately. The photo on the left is before my peel; the one on the right is seven days later.

Of course, it's not realistic for most people to get a peel every time a zit pops up, but if you regularly experience breakouts that resist spot treatments, talk to your dermatologist about trying a chemical peel.

It Might Make You Want To Ditch Your Foundation

At the time of publication, I haven't worn foundation since I got my peel — something I used to do every single day. I'll still pop a little concealer under my eyes, but I truly feel like the glow I experienced immediately after the treatment has more or less stuck around. This picture was taken almost a month after the peel, and the only thing on my skin is a little highlighter on my cheekbones. Of course, there's no shame in actually enjoying the process of foundation application, but I appreciate the time I save by skipping that step in the morning.

Everyone will have different results, but I'm officially hooked on that peel life.