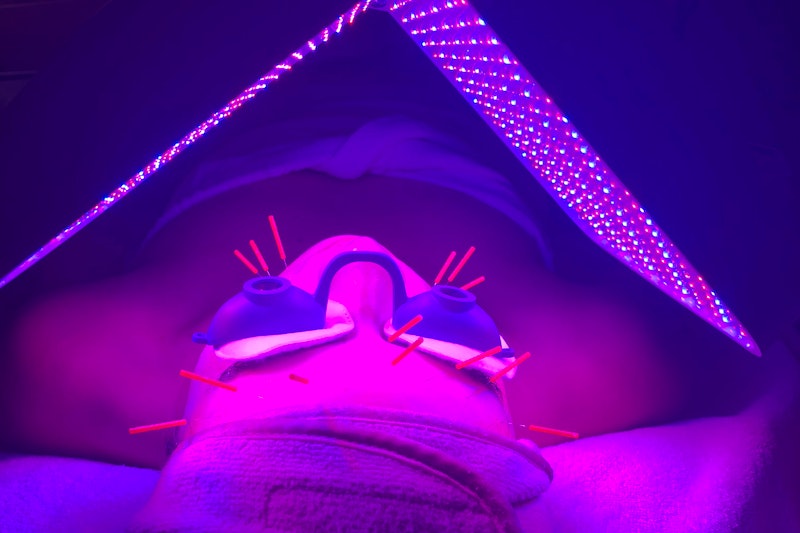 Would you let a complete stranger stick your face with dozens of needles for the sake of younger looking skin? Because that's what I did during Gotham Wellness' "Acupuncture facial," and it was the best beauty experience of my life.

I discovered the treatment on Instagram, after Elaine Welteroth (the former editor-in-chief of Teen Vogue and my personal obsession) shared her experience on Instagram, and immediately booked myself an appointment at Gotham Wellness.

But what exactly is the point of an acupuncture facial? And how should I expect to feel after spending two hours covered in tiny needles? "You should be lifted, and glowing, super relaxed, and floating,” promises Stefanie DeLibero, the mastermind behind what was sure to be the best facial in the history of facials.

As a practice, acupuncture dates back thousands of years, and uses tiny needles to channel energy throughout the body to create balance and health. In the case of my facial, acupuncture was going to help re-channel my energy to make my skin straight-up glow from the inside. "Generally what the treatment does is it addresses beauty concerns from the inside out,” DiLibero explains while I laid on the table and tried to mentally prep myself to have needles poked into my face.

“Generally, you go and you put stuff on your face, but you might be eating crazy things, you might be sleeping terribly, you might have bad digestion, and a lot of that stuff shows up on our faces. As much as we’d like to think that there’s a cream that can do that, we have to take better care of ourselves, but we don’t always have the time," DiLibero says.

She had a point. As much as I swear by the four-step Drunk Elephant skin care routine I use every morning and night, I knew that there were some deeper issues that were making me look wrinkly and grey that no amount of product would ever be able to solve.

"Acupuncture’s really nice because it addresses the physiological causes of aging, such as poor sleep, anger, sadness, bad digestion, acne, puffy skin — all sorts of concerns are really physiological components that manifest on the face,” she tells me.

When DiLibero quizzed me on everything from my health history to my sleeping, eating, drinking, and smoking habits, it became pretty clear that she was right about the importance of treating the stuff going on underneath the surface. Despite the fact that she called me “pretty healthy” (thanks, girl!) and told me my skin looked "like a baby’s," I couldn’t hide the fact that I spent the better part of the last few months on minimal sleep and maximum tequila. After all, it was literally written all over my face.

Because this was my first time ever getting acupuncture, DiLibero gave me a full rundown of what to expect.

"With acupuncture, people are scared of the needles going in — that’s usually not the thing that hurts,” she explains, which was met with a massive sigh of relief from me. “What sometimes happens is that you get these sensations you haven’t had before. If you know about them, it isn’t scary, but sometimes the needle will go in and you’ll feel something kind of run down or the needle will go in over here and you’re feeling something somewhere else, so it’s kind of strange. But generally people feel kind of heavy, like when you sink into your bed and you’re exhausted, or [you'll] feel like [you're] floating on air.”

I had no idea what the heck she was talking about, but the “it won’t hurt” and the “it will feel like you’re floating on air” thing sounded pretty good to me.

She started by sticking a few needles into points on my feet and ankles. I was so distracted thinking about how much I wish I’d shaved my legs for my “facial” and being embarrassed about how prickly they were that I barely noticed the needles going in. It didn’t hurt at all, but as soon as she poked my ankles there was a weird… sensation. It felt like a lightning bolt was shooting up my legs, which wasn’t exactly unpleasant but still felt strange — kind of like when the doctor hits your knee with that weird rubber triangle thing.

After the lower fifth of my body was appropriately outfitted in tiny needles, it was time for the actual facial to begin. The first part was pretty much standard facial procedure. She started with a pre-cleanser, followed by an exfoliating clay mask, then a cleansing milk, a Glycolic toner, and a Vitamin A gel, all of which came from South African skin care brand Environ. I was so "zenned" out while she was massaging my face, all I can remember is that they smelled (and I guess, felt) straight-up delicious.

Next came the “micro-current face lift,” which DiLibero says is “basically like taking your face to the gym.” She used two tools that looked like they’d come from the Little Mermaid’s treasure trove, which both had currents running through them, to work and tone some of the muscles in my face. (In case you were wondering, it was a lot more enjoyable than going to the regular gym.)

Finally, it was time for the moment I’d been waiting for: facial acupuncture. The point of the little needles, which I’ll admit I was mildly terrified of, was to address some of the physiological points in the face to soften the muscles and rebuild collagen.

Since I couldn’t see the needles going into my face, I tried to selfie-camera the whole experience, which winded up freaking me out even more. But when she put the first needle into my skin it didn't hurt at all. Neither did the next one, or the one after that. Phew!

Once my face looked like a proper pin cushion, DiLibero put me underneath a multi-colored LED light with infrared that helps with acne, collagen formation, pain, and inflammation. It reminded me of the days when I used to bake in a tanning booth three times a week in the 11th grade, but she assured me that it was not at all the same thing. I laid under the lights for 20 minutes, and around minute six was when the whole “floating on air, deeply relaxed” thing set in. I completely forgot that there were a dozen needles sticking out of my face, and fell somewhere between an intense meditative state and sleep.

I’ll admit, taking the needles out was a little bit more painful than putting them in (one also fell out of my face when I was passed out, which DiLibero said was normal but I found to be freaky AF), but it was over quickly. Then, she sprayed my face with oxygen, which smelled like an absolute dream.

About 120 minutes and approximately a zillion little needles after our initial consultation, I was ready for the big reveal. “Holy shit, I look f*****g amazing,” was my initial, ladylike reaction when DiLibero handed me the mirror. “I mean, I’m sorry, but I am glowing.”

My face was not only glowing, but the eleven lines on my forehead (aka the bain of my 26-year-old existence) were completely gone. As a beauty writer, I get to try out a lot of cool products and treatments and things that promise to make me look “younger,” “glowier,” and “more amazing!” than ever, but I can honestly say that this was the best my skin has ever, ever ever looked. When I left, I couldn’t stop staring at myself in store windows, to the point where I accidentally walked in to multiple strangers on the streets of Manhattan. I went to a party that night and didn’t wear face makeup for the first time in my life. All I can really say about Stefanie DiLibero is that some heroes clearly don’t wear capes.

Obvious word of caution: Don’t try this at home. However, if you ever find yourself in New York City and want to look like the best ever version of yourself, hit up Gotham Wellness. Then, be ready to send selfies to everyone you’ve ever met, because trust me, you’re going to want to — afterward, sure, but especially when there are 15 needles poking out of your face.