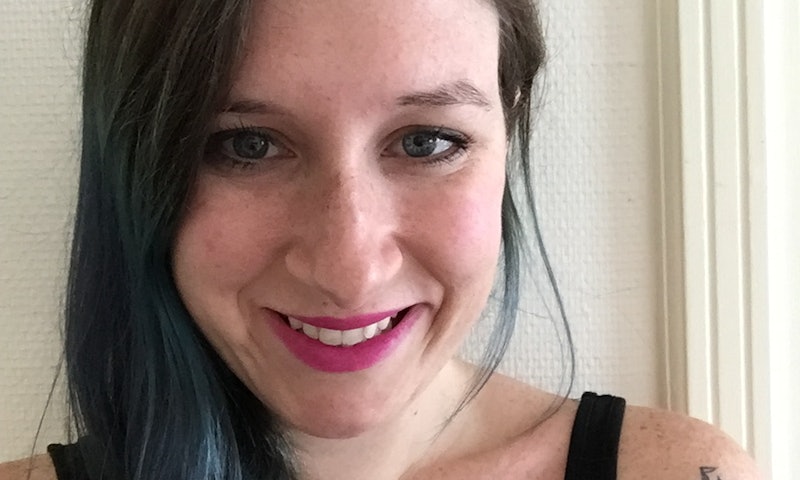 You sometimes hear about people being hypnotized into quacking like ducks and doing other wacky things. Then, there are the more useful application for hypnosis, like quitting a bad habit. But what if the change you desire is internal? Can hypnosis change your attitude? That's what I wondered when hypnotist Grace Smith offered to do four Skype sessions with me on a topic of my choice. (If you're curious, you can hear pre-recorded sessions of hers through her app Grace Space.)

The decision of what issue to address was daunting. I would love to experience less anxiety, I thought. But then I thought about what I wanted to gain from that anxiety reduction. What would my life look like without fear? As I thought about it, the answer was clear: I wanted to feel like a queen. I wanted to live loudly and unapologetically. I wanted my self-esteem to match the badass that I was.

So, I told Smith I wanted to work on improving my confidence. She liked the idea because she sensed that low self-esteem was at the root of my anxiety anyway. During our first session, we talked about my goals, and she explained to me that one session of hypnosis had led her to quit smoking, and she wants to make it mainstream. She then put on relaxing music and had me repeat specific mantras, like "I am safe, I am calm, I choose to be here." It wasn't the classic "you are getting sleepy" hypnosis, but it made me open enough to listen when she spoke about how great I would come to feel about myself.

During our second session, Smith had me picture a confident person I knew and then absorb her qualities through light emanating from her to me. During our third, I imagined traveling to a planet where there was no such thing as time and picturing how I'd live my life there, in a relaxed state. She also had me list the things I'd do if I were confident, and she read them back and told me to imaging accomplishing them. And during our fourth, she had me travel back to my earliest memory of shame — being yelled at for crying as a toddler — and comfort my younger self.

I had my ups and downs over the course of the month and a half we worked together, but I've definitely ended up better than I started off. As it turns out, being a queen doesn't feel exactly the way I expected — it feels even better. Here are some changes I saw in my life as our sessions progressed.

1. I Stopped Letting Other People Off The Hook

I used to avoid advocating for myself because I feared I was inconveniencing people. I wouldn't, for example, follow up on emails others didn't respond to because I felt bad for being annoying. If people dodged my questions, I wouldn't ask again because I felt bad about pushing them. Over the course of my sessions with Smith, my motto became "they should feel bad." I shouldn't feel bad for harboring reasonable expectations toward people who are being disorganized or uncommunicative.

This shift from blaming myself for not accommodating others' BS to blaming them for their own BS has been life-changing. When you hold people to a higher standard, it turns out they'll work to meet it. Plus, now I'm not waiting forever for people to answer my emails. And often, they thank me for reminding them.

2. I Stopped Forcing Myself To Smile

You might think that after being hypnotized into feeling like a queen, you'd walk around with a big grin on your face. But the opposite happened to me. Now, I more often hold my face in a neutral expression. As I got more and more in touch with my emotions and thoughts, I realized that the great majority of my smiles and laughs were fake, put on to please other people. And maybe they did please people, but at the cost of my authenticity, both with myself and with others.

When you're busy putting on an expression for others, it can become hard to discern what you're really feeling. I'd rather have a resting bitch face than become totally disconnected from myself. As it turns out, I'm not really a cheerful person (though I'm not melancholy either). And by no longer trying to appear cheerful, I'm giving other people the gift of actually connecting with me.

3. I Voiced My Desires With Excitement

Right before my first session with Smith, I was obsessing over my boyfriend's request to let him know what I wanted for Christmas. What I really wanted was a night in a hotel in Paris before the trip we'd already planned to another part of France, but that sounded like too much to ask for. I wrote an email suggesting the idea with a bunch of information about scheduling and justifications for why we should do it to make myself feel less guilty. Then, I immediately replied and told him I actually wasn't sure and had to think about it.

A few weeks after my first session with Smith, it came to me that I really did want this night in Paris, and my boyfriend would probably want it too if it made me that happy. I wrote back a poetic email about my desire to buy a dress there and twirl in it for him in our hotel room. He immediately responded with just as much excitement. Since then, I've remembered to approach asking for things excitedly rather than getting bogged down in guilt or logistics. This way, people won't feel like they're doing you a favor; they'll get excited right along with you.

4. I Set Boundaries at Work

While I was on this trip in Paris, I got an email about a job I applied to. My prospective boss wanted me to do a trial shift in just two days, the weekend of New Year's Eve. I already had plans, but I was scared that if I turned it down, I wouldn't get another chance.

I thought and thought and thought about it and realized that if I suggested different days and lost the opportunity because of that, it wouldn't be my fault. It would be their fault for being unreasonable. Once again, I thought: I shouldn't feel bad. They should feel bad. It felt so good to set that boundary, and I ended up rescheduling the shift and getting the job. Even more importantly, I walked into it with self-respect and the belief that I was worth waiting for.

5. I Didn't Let People Intimidate Me

During one session, I was trying to decide who to work with on a particular project. There was one prospect who I liked but found intimidating, so Smith prepared me for my meeting with her by having me imagine absorbing the qualities of a confident person I knew. During the meeting, I got questions that made me feel attacked, like "Why didn't you do this sooner?" Instead of answering by apologizing, I took a deep breath and explained my reasoning. And that was really all she wanted to hear. She wasn't attacking me after all. She just wanted to understand my thinking.

This is a lesson I'll take to many more relationships, both personal and professional. If someone asks you a question that seems accusatory, don't get defensive. Confidently explain why they have nothing to attack you for, and they probably won't attack you at all.

6. I Stopped Looking For Excuses To Do What I Wanted

One of the goals Smith and I set for our last session was that I would go on a trips just because I felt like it, even if I didn't have a reason. I'd always felt I needed an excuse to travel, and behind this need was a deep shame around acting on my desires, as if they couldn't be trusted. Traveling just for fun felt indulgent.

During the weeks leading up to our last session, I'd wanted to get into the sun but couldn't find an excuse. Two of my friends had talked about going to Morocco together, but their travel plans kept getting pushed back. I waited and waited until I realized that if I wanted to go, I could just go on my own. So I did.

Several months prior, I couldn't have imagined myself honoring my desires enough to take off to another country just because I felt like it. Doing this took confidence, because it meant I considered my happiness so important, it was worth pursuing for its own sake.

In all fairness, I underwent a few different personal development projects during this time, including an ayahuasca retreat and several sessions with an intuitive. But I do have to say, a lot of the improvements I saw were goals I'd specifically set during hypnosis.