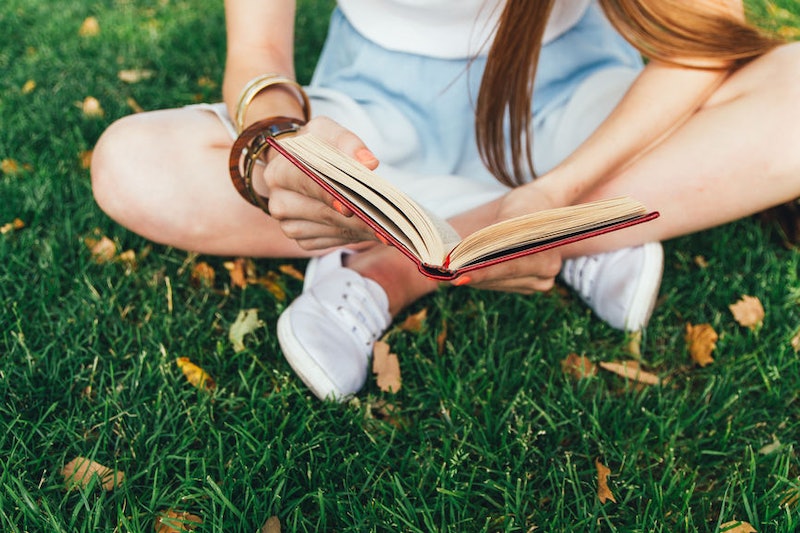 To graduate from eighth grade, I stood in front of a packed church next to the Christian school I attended and recited the entire book of James from the Bible — that’s all 108 verses, and five chapters. My school's curriculum emphasized teachings like the Earth being only a few thousand years old (It's actually over four billion years old) and the Bible being the best book ever. Me and my classmates memorized passages from the Bible for homework, and the assignments grew more ambitious each year.

I had been memorizing Bible verses for as long as I could remember. Teachings like "Jesus is the only way to heaven" were on heavy rotation, along with "You’ll burn in a literal fire for eternity if you don’t get into heaven." Being able to show everyone my devotion by flawlessly reciting an entire book of the Bible on that warm May evening felt intoxicating.

Now seems like the time to note there’s nothing wrong with devotion. What I didn’t understand back then, though, is how the fundamentalist version of any truth turns into dogma, like a miracle gone wrong where the bread turns into stone.

In my 20s, I realized that I had been mistaken about a lot of things, but knowing I was wrong didn't mean I knew what to do about it. I was still reading the Bible regularly, along with books by theologians like Henri Nouwen and Dietrich Bonhoeffer. But it was lines from an Emily Dickinson poem that I had stumbled upon as a kid and rediscovered in grad school that haunted me:

"There's a certain Slant of light,

As my faith unraveled, I realized that was the only sentence in the world that sounded true to me. I needed more sentences like this, new ones. So I read as much as possible, about feminist theology, medieval mysticism, quantum physics, self-help, and poetry. Book by book, I formed a new way of seeing the world.

In some of my science-leaning reading, I discovered the concept of "neural plasticity," which refers to the brain’s ability to adapt. Scientists used to think human brains became rigid they aged, making people unlikely to change their minds, so to speak. But the brain, it turns out, continuously changes. Scientists now know that when you learn something new, you make a connection between neurons.

That thought becomes more natural to you as you fortify the pathway your brain created for it.

Maybe you had piles of science homework as a kid and you already know about the 100 billion or so neurons that power your brain and send information to each other through electrical or chemical signals. Every time you think a particular thought, you strengthen that connection — which you might as well call a "synapse," to feel as scientific as possible — between neurons.

That thought becomes more natural to you as you fortify the pathway your brain created for it. And, if you leave pathways alone, they fizzle out like day-old soda pop. Now that scientists are measuring these changes with fMRIs, they can even watch when a new pathway lights up and an old pathway fades. You can change your mind, literally.

This gave me hope that I could become the kind of person I wanted to be instead of the one I had trained to be. And it gave me the idea to do more with my stacks of books than just read them. I could "rewire" my brain as I went along.

Un-conversion can be lonely when all of your friends were from church.

"Sorry, I can't meet you for brunch this weekend — I’m rewiring my brain again," I might have said if I’d actually been receiving any brunch invitations. Un-conversion can be lonely when all of your friends were from church.

Some passages from my reading that started to seem true would have struck that church girl as heresy. Some cleared away years of questions in a few words. Some took my breath away — like this one, from the medieval Sufi poet Rumi: “For one moment quit being sad. Hear blessings dropping their blossoms around you.”

There is something deeply powerful about that poem, which is mostly about being broken and mired in mud. Reading it felt like swallowing an antidote to judgment. I wanted to absorb that fully. I wanted that to be a pathway in my brain: A neural pathway strewn with blossoms, if that’s a thing scientists could look into next.

So I spent extra time with passages like that one. I wrote them down. I would refer back to them multiple times, feeling not only liberated but also scientific as I fortified my neural pathways. One weekend while I flipped through notebooks, I decided I wanted these ideas in one place. I typed up a few lines and printed them out. I printed images I liked, too. These were illustrations mostly — retro stylings of kittens and castles and solar systems and trees heavy with snow. I cut out the quotes and the illustrations and taped them to paper, then stapled the pages together. I pulled out my booklet on weekends mostly, during random moments like waiting in line for a donut or exploring a museum. I added the lines to my to-do list at work, too.

Confining lines of wonder to a booklet or list may seem like no way to treat a poem you love — and quotables are more likely to irritate than inspire me, I swear. But I wanted to immerse myself. There were pitfalls. Halfway through a meeting at work one day, I noticed a befuddled look on a colleague’s face. She couldn’t take her eyes off me or my verse-adorned to-do list, then looked at me askance for weeks.

I ran across another line from Emily Dickinson years into my rewiring: “The Truth must dazzle gradually / Or every man be blind.” I’d stopped going to church years before, but that had been the easy part. Slowly, my rigid beliefs faded. New lights dazzled. The recently added tracks in my brain became my natural way of seeing the world. One day, I realized I no longer needed my booklets and lists to remind me of the person I wanted to become.

I can still recite a few of those verses I knew as a teenage fundamentalist, but they don’t seem to have anything to do with me anymore. From the outside in, it might look like I merely traded one set of verses for another. But the view from inside reveals an entire transformation. It looks miraculous. The rewiring worked, line by line, like I was creating a poem of my own all along.