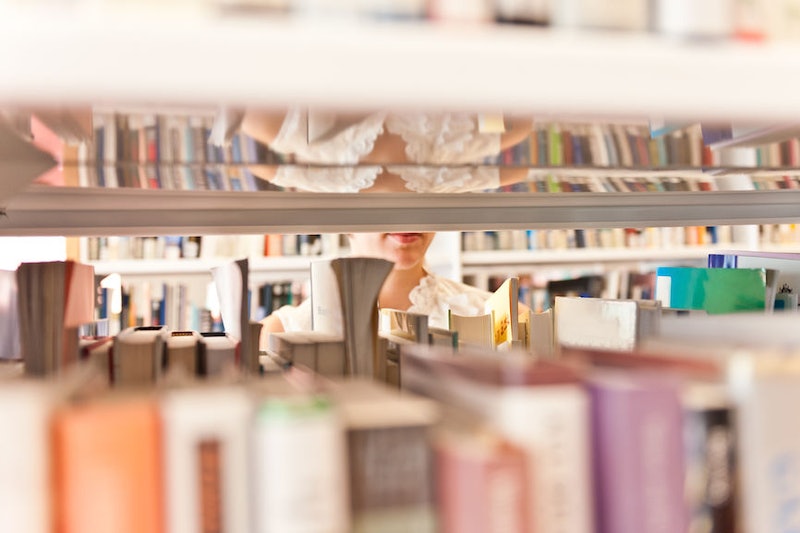 In 1997 when I was 16, sexual purity and abstinence-only culture was all I had ever known. I was the girl in the oversized jumper dress that hid my figure and my legs. I wore a silver purity ring on my right hand and a hunter green "What Would Jesus Do?" bracelet on my wrist. I didn’t use makeup or tampons. I didn’t kiss, hold hands, or date. I definitely never looked at my naked body if I could avoid it. I stood out in all the wrong ways, but this was my normal. And all of my homeschool friends were just like me.

In my evangelical cult, a woman’s path in life was clear: Get married, have children but not a career, keep quiet, be modest, and obey your husband. A man needed to make money and be in charge, and meanwhile, his wife would provide him with sex and care for his children. When a teen rebelled against their parents or a wife left her husband, it was commonly spoken of as a form of demon possession, and we prayed that the person under satanic oppression would be released. Spanking children as young 18 months old was encouraged, and strict discipline was expected. In fact, one pastor gave a seminar about which spanking methods and everyday household items produced the best obedience in children and teens. Ritualistic beatings were coded as loving discipline.

In my evangelical cult, a woman’s path in life was clear: Get married, have children but not a career, keep quiet, be modest, and obey your husband.

Due to the cult’s obsession with sexual purity, information about sex for teens was limited to a list of "don’ts." Don’t touch someone of the opposite sex. Don’t kiss until your wedding day. Don’t date anyone you wouldn’t want to marry. (But how would we know we wanted to marry them without dating them?) If you had questions about sex, they would largely be answered the night before your wedding — but never in too much detail, lest it corrupt your virgin mind. Forget questions or discussions about homosexuality or being transgender; as far as my evangelical subculture was concerned, those "lifestyles" didn’t really exist.

I lived in this environment when I got my first job at the public library. I was 16 years old, and the library seemed like the safest place to work for an overprotected, naive homeschooled girl. No one will be surprised to hear that I went straight for the raunchiest romance novels I could find. Released from parental and church oversight for the duration of my four-hour shifts, I was free to sneak peeks at graphic sex scenes in novels filled with enough purple prose to make me roll my eyes. I read Christina Dodd, Candace Camp, and Kathleen Woodiwiss novels with their strong depictions of BDSM relationships. I began to develop a nose for sexual deviance in books.

It was easy to find the sex in bodice rippers, but I soon found that nonfiction had even more to offer. The sexual health section became one of my favorite places to surreptitiously flip through The Joy of Sex, Our Bodies, Ourselves, and books about homosexuality. Thanks to the Dewey Decimal System, I couldn’t stay in that aisle for very long without someone automatically knowing what I was looking at. Even though I was afraid of being caught, I went back to those shelves again and again.

In the nonfiction art call numbers, I found alternative comics and graphic novels. I remember the vivid shock I felt when I opened a collection of Dirty Plotte by Julie Doucet. The panels were vile and honest and bizarre and unapologetic. She did not hold anything back about being human or being female. This was a side of feminism and art that I hadn’t known to think or ask for, and I desperately wanted more of it.

This was a side of feminism and art that I hadn’t known to think or ask for, and I desperately wanted more of it.

I didn’t dare check out most of the books that I found. There was no way to ensure that my mother wouldn’t find the books if I brought them home. Instead, I checked out novels that did not announce their sexual content. I brought home classic literature that hinted at affairs, indiscretions, and confirmed bachelors. I felt brave enough to check out inoffensive-looking women's fiction book that emphasized female empowerment and sexual freedom. I learned to travel with a backpack to conceal my book stack, to check out decoy books that wouldn’t arouse suspicion, to throw my mother off the scent by talking about what I was reading without actually talking about what I was reading. If it appeared I had nothing to hide, no one would look too hard.

I believed that when I read about sex until my cheeks turned red that I was doing something very wrong.

My intellectual awakening came from the place I least expected: the 200s, the section for religion and theology. I recognized the books by Christian apologists like C.S. Lewis and Max Lucado, but there were also books pertaining to other denominations and religions. I noticed titles for Catholicism, Islam, Mormonism, and Buddhism. Each with multiple splinters and branches. Each author believing their truth was The Truth. Everyone in that section was convinced of their god, their rules, their rewards, and their punishments.

The religious books represented deeply held but mutually exclusive beliefs. They could not all be right about this life or the next one. I began to question what I had been taught to believe because being absolutely convinced of something was no longer a good enough reason to keep believing it.

I wish I could tell you that I left the cult the next day, but I didn’t. And I didn’t quit the cult once I turned 18 and could have easily rebelled. The indoctrinating thought processes were too entrenched for me to see the open door yet. It was a few more years and several life events before I could outwardly reject the prejudiced, diseased way my childhood religion had taught me to think about myself and the world. But my escape started in the library, where I saw the path from sexual shame to sexual freedom and from religious certainty to sacred doubt.