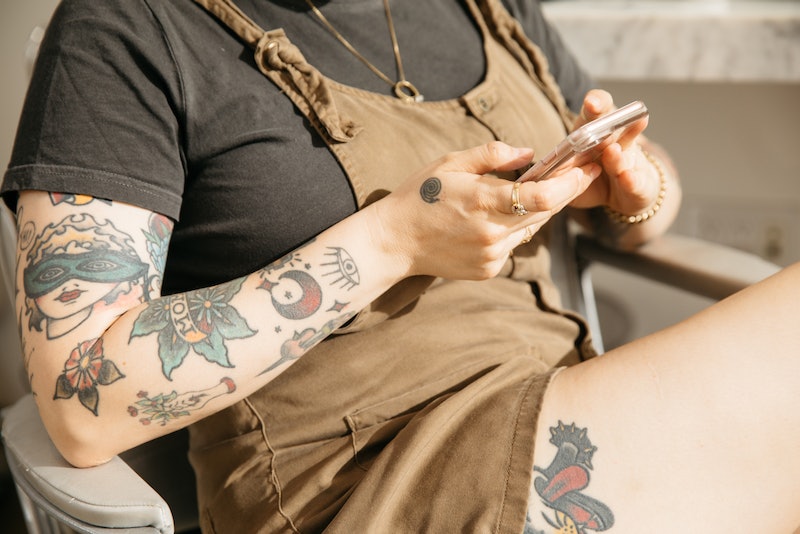 The New Year is often a time for re-evaluating and getting rid of things you don't need any more. For me, though, my re-evaluation was unintentional and unwanted. On Dec. 21, for the second time in a year, my phone was stolen — both times at a crowded train station, while I was occupied with luggage. The resulting time without it has been illuminating: For me, it's shown me just how much smartphones have changed the way we interact and maintain relationships.

Statistics from 2018 indicate that the average American adult spends three hours and 35 minutes on mobile devices like phones and tablets per day. The idea behind paring down our obsession with our phones is sound: the 'blue light' emitted by electronic devices disrupts human sleep patterns, and there are genuine fears that technology is separating us from valuable human interaction. MIT sociologist Sherry Turkle worries that smartphones are "killing conversation" and that we're losing the ability to hold long, enthused dialogues because of our over-reliance on their technology. Camps and campaigns exist to help wean people off their need for devices long-term.

There is, however, a large difference between intentionally weaning yourself off a phone and no longer having access to it. Aside from the annoyance and complications of having an expensive possession stolen, the expense of replacing it and the struggles with police reports and insurance (lesson: always keep records of your phone's value or you can't claim for it), I felt a bit of a wrench at its absence.

My emotional reaction had two recognizable stages. The first was the recognition that I check my phone (looking at weather or the news) pretty regularly, and my hand kept flapping at my pocket like an impotent bird. This, the habitual-checking feeling, faded pretty quickly; I could live without reading the latest BBC updates for a while.

The second stage was a creeping sense of loneliness. I felt disconnected and upset that I couldn't interact with people, check in on them, see what was happening. This isn't just millennial over-reliance on phones, though: I've moved countries several times in my life, most recently two months ago. This means that every friend, connection and family member I have (aside from my husband and my cat) lives in another country, many in another time zone. I work freelance, so my coworkers are whoever happens to be in the same café on the same day; my husband travels regularly for work; and my cat is terrible at WhatsApp, because she is a cat. My phone is the touchstone through which I maintain almost every social connection I have.

My situation is extreme but not particularly unusual. A study of millennials in 2017 found that 47 percent of them work freelance, which means that a traditional community of coworkers and acquaintances bound by work is more difficult to achieve. MoveHub saw a 60 percent upswing in international moving enquiries by millennials in 2017, as larger quantities of our generation shift countries. We're also a generation of expats; an HSBC survey of young people who'd moved overseas in 2017 reported by CultureTrip found that reaching financial and career goals were major motivations for an international move. Technology is how we keep ourselves rooted.

As I've moved, my cell phone has become my lifeline, stringing connections across oceans. My best childhood friend from Melbourne updates me daily on the beanie she's knitting for me; my brother in Sydney and I talk every day; I exchange stupid puns with people in America, England, the Netherlands and Germany. My phone is a very important part of my social world, and life without it felt unmoored.

This feeling falls in line with what a study in 2018 from McGill University found: The "addictive" part of smartphone use isn't about technology, it's about social interaction. "[I]t is our desire for human interaction that is addictive and there are fairly simple solutions to deal with this," lead author Samuel Veissière said in a press release. Smartphones can fuel "hyper-vigilance" around social interactions — checking your phone every two minutes for a response, an email, a notification — and that's the root of why it can be harmful for many of us, says the study.

I relate to this conclusion. Being disconnected from others led to unease: I couldn't constantly check on them and feel reassured, particularly because all of them are so far away. I was using my phone as a way to quell anxiety and loneliness, but by checking it so often I was fueling the anxiety itself. I left Twitter earlier in the year because it was bad for my mental health, and it seems that smartphone technology was making me vulnerable, too.

So, what did I learn from this experience? First, double-back up every precious photo or interaction on my device so loss or theft doesn't leave me unmoored again. And second, that I'm good at keeping myself connected, but I can also learn to sit in silence without worrying. A voluntary digital break isn't for me, but reassessment of my serious attachment to WhatsApp? Probably necessary.

More like this
Flip Phones Are Gen Z's Favorite New Nightlife Accessory
By Maria Santa Poggi
11 Super Bowl Instagram Captions To Use On Game Day — Even If You Don’t Like Sports
By Alexis Morillo
25 Galentine's Day Games To Play On Zoom With Your Long-Distance Besties
By Mia Mercado
Everything You Need To Know About The Samsung Galaxy S23 Ultra’s New Camera
By Alexis Morillo
Get Even More From Bustle — Sign Up For The Newsletter
From hair trends to relationship advice, our daily newsletter has everything you need to sound like a person who’s on TikTok, even if you aren’t.