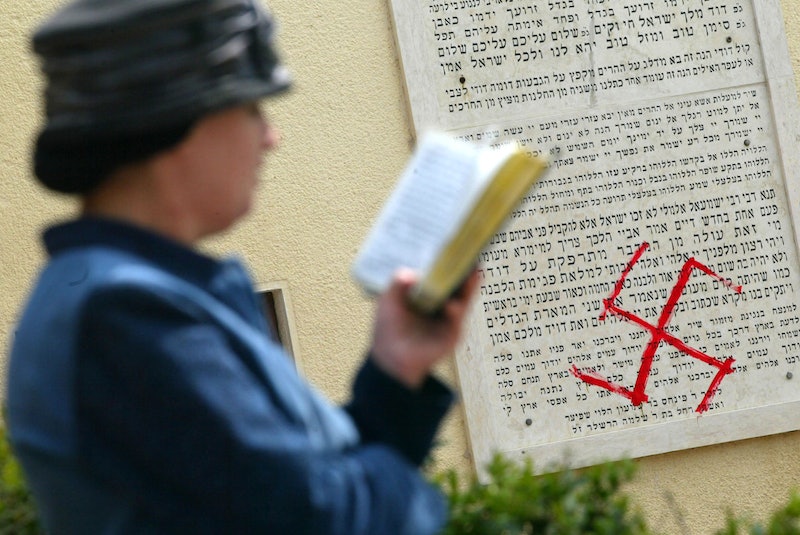 During a press conference on Wednesday with Israeli Prime Minister Benjamin Netanyahu by his side, President Donald Trump was asked directly by a reporter about the "sharp rise in anti-Semitic incidents across the United States" that have occurred "since your election campaign and even after your victory." Of the many topics Trump could have been asked about — the resignation of his national security adviser, Michael Flynn; the recent report his campaign aides were in talks with Russian intelligence officials during the election — this was a relative softball. In fact, Trump certainly could have used the question as an opportunity to clear the controversy and concern surrounding his White House statement on Holocaust Remembrance Day, the one that actually failed to mention the 6 million Jews that were systematically slaughtered.

Instead, Trump bungled his response by beginning with a cringe-inducing boast about how large his victory was in the Electoral College.

"I just want to say that we are very honored by the victory that we had," Trump said. "306 Electoral College votes. We were not supposed to crack 220. You know that, right? There was no way to 221, but then they said there's no way to 270. And there's tremendous enthusiasm out there."

Many journalists pounced on Trump's answer — not to mention advocacy groups, like the Anti-Defamation League. While the group praised certain remarks made by Trump during the press conference, such as keeping Iran from developing nuclear weapons capability and acknowledging the historical persecution of Jews, the ADL tweeted it was "troubling" that the president "failed to condemn the real issue of anti-Semitism in US today."

Many journalists were whip-fast in calling out President Trump for beginning his answer to a question about anti-Semitism by starting with a desperate-sounding brag about the election.

As I saw after Trump's now-infamous Holocaust Remembrance Day statement that left out any specific mention of Jews, journalists, politicians, and many others were quick to denounce the president and his team for failing to address Jewish suffering.

I just wish some of these same people were as sensitive and eager to respond to anti-Semitism and discrimination towards the Jewish community when it isn't tied to Trump or people affiliated with him.

Of course, this response is heartening. I am pleased that so many people and so many groups are so attuned to anti-Semitism and eager to call out those who fail to adequately condemn it. I just wish some of these same people were as sensitive and eager to respond to anti-Semitism and discrimination towards the Jewish community when it isn't tied to Trump or people affiliated with him.

This is not to defend Trump's response to the question. I will say that as an American Jew who considers herself pretty well-versed in the history of anti-Semitism — including serious concerns about anti-Semitism raised during the Trump campaign — I was more dumbfounded than offended by the answer. It was weak and not compelling, and it squandered a chance to address the worries of anti-Semitism that have plagued him and his circle.

I wonder if there would be attention — let alone such fire and indignation — if it was coming from someone on the other side of the aisle.

However, it is worth noting — and it seems some places have not added this part — that Trump did go on to say, "We are going to do everything within our power to stop long-simmering racism and every other thing that's going on." He insisted, "You're going to see a lot of love." He brought up his Jewish daughter and Jewish grandchildren, which feels more than a little trite at this point, but an ineffective answer doesn't make it an anti-Semitic one.

Moreover, as I watch my Twitter feed blow up with journalists, analysts, politicians, and friends exclaiming in various forms how horrible and ridiculous Trump's answer is, I wondered if there would be attention — let alone such fire and indignation — if it was coming from someone on the other side of the aisle.

Tablet reporter Yair Rosenberg — who also has the dubious pleasure of being one of the 10 journalists to receive the most anti-Semitic tweets, according to a study by the ADL — shared a helpful reminder about the double standard on anti-Semitism.

On Monday, Rosenberg tweeted a story about how the student council at McGill University, one of the most prestigious universities in Canada, voted not to punish Igor Sadikov, a student who encouraged people to "punch a Zionist today" on Twitter. Sadikov also refused to retract his statement.

Rosenberg pointed out: "I hope the liberal rightly outraged at the anti-Semitism of the Trumpkin alt-right will be just as incensed by their own community." I'm honestly not sure they are.

And if we are talking about reactions to Trump, the current president, let's talk about the response to the former.

After the January 2015 attack on a kosher supermarket in Paris, which occurred days after the Charlie Hebdo one, President Obama refused to say Jews were specifically targeted.

"It is entirely legitimate for the American people to be deeply concerned when you’ve got a bunch of violent, vicious zealots who behead people or randomly shoot a bunch of folks in a deli in Paris," Obama said when Vox asked about the attack, which occurred hours before the Jewish sabbath began and resulted in the murder of four hostages. The State Department press secretary also declined to call the attack anti-Semitic.

This was an attack on a kosher deli. Does the president have any doubt that those terrorists attacked that deli because there would be Jews in that deli?

Earnest's response, included below, pointedly refused to even include the word "Jew."

It is clear from the terrorists and some of the writings they put out afterwards, what their motivation was. The adverb that the president chose was used to indicate that the individuals who were killed in that terrible tragic incident were killed not because of who they were, but because of where they randomly happened to be.

The bizarre verbal gymnastics could give Kellyanne Conway a run for her money.

The censure of Obama and his team was not nearly so swift nor so loud. I do not recall many journalists outrageously tweeting about it at the time, and the ADL, though critical, was also measured. Abraham Foxman of the ADL said the White House comments "clouded the issue" in a letter to Earnest, but he also assured that he believed Obama was "very clear" Obama viewed the attack as anti-Semitism.

There is clearly a need to be vigilante and critical of anti-Semitism, but that critical eye cannot be reserved exclusively for Trump.