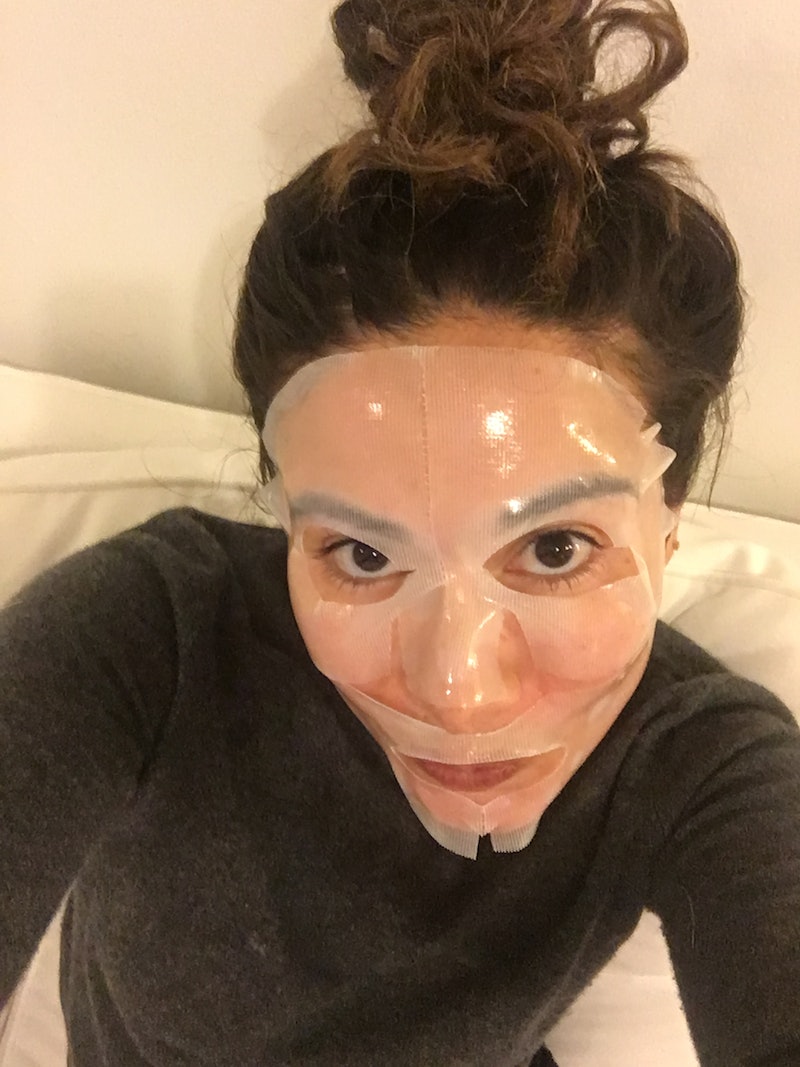 I'm willing to try pretty much anything for the sake of beauty. I've styled my eyebrows with soap, washed my face with olive oil, and took my boyfriend to Sephora to show him why I need makeup. But when I heard about "snail slime" skin care, I'll admit I was a little grossed out. OK, I was a lot grossed out. Considering I don't even like to look at the slippery little creatures, the question of putting their juices on my face was answered with a firm and swift "hell, no."

But then, I started reading more about it, (what can I say? I like to Google gross stuff. When I die, please delete my search history) and found myself feeling more and more intrigued by the seemingly zillions of benefits that come along with putting snail mucus on your face. "Much in the way that their mucin protects their delicate little snail feet from environmental hazards such as rough surfaces, bacteria and UV-rays and keeps them moist in dry conditions, many of the nutrients in snail mucin can also be absorbed by our skin to similar effects," says the team at MISSHA, a beauty and skin care company based in Korea. "Regular use of snail mucin has been shown to fade acne scars and hyperpigmentation, moisturize and firm skin, clear complexion, and minimize pores."

First of all, "delicate little snail feet" is the cutest thing I've ever heard, and second of all, those benefits all sounded like the best things ever. Consideing that it's the middle of winter and my skin needs a major hydration boost, I decided it might be worth a try.

The first thing I did when I received my snail routine from Missha was sniff every one of the products. I was pleased (and also thrilled) to discover that snail slime does not smell nearly as disgusting as you'd expect it would. In fact, it doesn't really smell like anything at all.

I started with the Super Aqua Cell Renewal Snail Hydro-Gel Mask, which was one of the more confusing sheet masks I've ever put on. It came in two pieces — a top for over the eyes and nose and a bottom part for the cheeks and lips — and had panels that needed to be peeled off from each side, which made me feel like it was really clean (I always get nervous about sheet masks after all the packaging issues that came up last year).

I left the mask on for a half an hour (the directions suggested 20-40 minutes) and when I took it off, I could tell that the "mucus" had penetrated my skin because the sheet was almost totally dried out. My skin felt smooth and moist, which is a feat in itself when it's 17 degrees outside.

Next came the Super Aqua Cell Renewal Snail Cream, which was the most intimidating product of the bunch. It looked like jelly, which was a little icky, but smelled really delicious and floral. I applied it generously to my face and neck, and could feel a difference within minutes. My skin didn't only feel moisturized, but it somehow felt softer and smoother than ever.

Finally, it was time for the Super Aqua Cell Renewal Snail Sleeping Mask. It was more of a cream than a gel (thankfully), and had the same texture as a gel primer. I put it on before bed, and it felt a bit sticky at first. But when I woke up, I was literally glowing. My skin was smooth and dewey, and felt even smoother than it had the night before.

I guess you could say I'm a snail mucus convert, seeing as I went from "totally grossed out" by it to a die-hard devotee. When I asked the Missha team what they would say to anyone who was, like me, uncomfortable with putting snail slime on their face, they had a pretty interesting (and fear inducing) answer:

"Is snail slime any grosser than, say, whale vomit, sheep grease, crushed beetles, fish scales, placenta, or infant foreskin? When it comes to beauty, I think the gross factor has always been there, but people don't seem to mind 'ambergris' 'lanolin,' 'carmine' and 'guanine' in their products, as the ingredients have been rebranded."

So, apparently we've been putting all of that stuff on our faces for years and had no idea.

"I guess you could say K-Beauty offers a little more transparency. Trendy ingredients usually make it right onto the packaging, whether it's honey or snail mucin," says MISSHA.

As uncomfortable as I was with snail mucus before I tried it, I am now pretty much obsessed, and committed to adding it into my regular daily routine. Like I said, I really will do anything for beauty, though I may actually draw the line at foreskin.