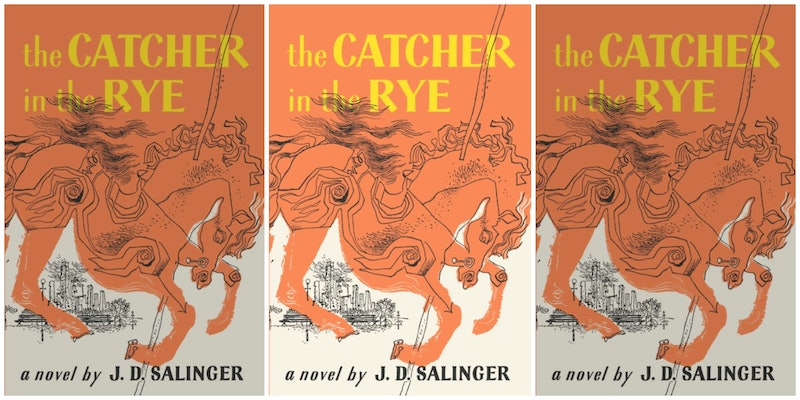 When I first read The Catcher in the Rye, like the vast majority of my 11th grade peers, I hated Holden Caulfield. Apparently, hating Holden Caulfield is one of the markers of a Millennial reader. A staple of my high school required reading list that included titles like Lord of the Flies, The Bell Jar, and The Great Gatsby, The Catcher in the Rye quickly became my most-hated book. In a syllabus of novels filled with vapid, self-indulgent, quintessentially disaffected young people, Holden was the disillusioned antihero waving the flaming baton at the front of a long parade of disillusioned antiheroes. But, rule-abiding Millennial that I was, I diligently annotated my mass market paperback copy, aced my book report, and promptly shelved Holden for what I imagined would be all eternity.

Then, a couple of years ago and well over a full-decade since I last walked the peanut-shell-covered halls of Pencey Preparatory Academy, I picked up The Catcher in the Rye again. Low and behold, I loved it. The Holden who struck me as whiney and self-obsessed in 2004 was hilariously irreverent and self-aware in 2017. Holden Caulfield, as it turns out, was a "Millennial" just like me — perhaps literature’s original Millennial, in fact.

Some of the best lines in The Catcher in the Rye read like Facebook posts and status updates (I’m talking about Facebook classic here; the pre-Russian troll days when you had to have a college e-mail address to join and Millennial cries for attention were best served with a side of self-aware wit.) Holden’s perception that everyone is a phony may have been about 65 years premature — I mean, can you imagine his take on our never-ending stream of perfectly filtered selfies? Like those memes about how the best plans are canceled ones, or how you can always spot the Millennial at a party because they’re the ones sitting under the table talking to the dog, The Catcher in the Rye reads like a stream of one-liners that perfectly capture the inner-monologue of someone alienated by their moment in time. And they’re actually quite funny:

“I think, even, if I ever die, and they stick me in a cemetery, and I have a tombstone and all, it'll say 'Holden Caulfield' on it, and then what year I was born and what year I died, and then right under that it'll say 'Fuck you.' I'm positive, in fact.”

There seems to be an assumption among readers that Holden himself doesn’t know he’s actually just as full of shit as the peers he mercilessly criticizes. (But also, who can't relate to a kid who drops out of school because he wants to read on a Saturday night and his dormitory is filled with debauching teenage boys?) As a character who has been equally critiqued for being overly-introspective, the Holden I became reacquainted with as an adult was painfully aware of how awkward, obnoxious, and out-of-place he was. The quintessential Millennial, Holden was perceptive enough to know that the world was feeding him line after line of garbage and that he’d bought into it all, but was not yet world-wise enough to know how to escape it for good:

“I'm the most terrific liar you ever saw in your life,” Holden tells readers. “It's awful. If I'm on my way to the store to buy a magazine, even, and somebody asks me where I'm going, I'm liable to say I'm going to the opera. It's terrible.”

Saying you’re going to the opera when you’re really on your way to the corner store to buy a magazine is the 1945 equivalent of only posting selfies taken from your good side, doing a complex yoga pose, from that one vacation you took in the south of France six years ago. (#Latergram is evergreen for only so long, people.)

Like us Millennials, Holden’s story remains largely misunderstood by those who critique his character. A common complaint against J.D. Salinger’s most polarizing protagonist is that Holden exhibits a Peter Pan-like quality: that I’m-never-growing-up syndrome. Critical readers have to look no further than Holden’s self-described dream job: being a literal catcher in the rye:

“I keep picturing all these little kids playing some game in this big field of rye and all. Thousands of little kids, and nobody's around — nobody big, I mean — except me,” Salinger wrote. “And I'm standing on the edge of some crazy cliff. What I have to do, I have to catch everybody if they start to go over the cliff — I mean if they're running and they don't look where they're going I have to come out from somewhere and catch them. That's all I do all day. I'd just be the catcher in the rye and all. I know it's crazy, but that's the only thing I'd really like to be.”

This catcher in the rye character is often taken as a metaphor for Holden’s aversion to maturing — he’s the only “big” person in a sea of children, his sole purpose being to prevent those children from jumping off a cliff and into what some readers assume is adulthood. But is Holden flat out resisting growing up, or does his "dream job" actually demonstrate an understanding that the entire world is going to hell in a handbasket, and he just wants to save his fellow youth from their fate? Could it be that Holden’s aversion isn’t to adulthood as a whole, but to the single rendering of adulthood that’s been prescribed him?

Admittedly, Holden’s Millennial saga can’t speak to everybody — as the stories of young, privileged, white males hardly do. But for those of us who were the over-scheduled, high-achieving offspring of relatively bougie helicopter parents, perhaps the initial distaste for Holden’s introspective angst stemmed from the fact that it hit us just a little too close to home. We were expected to run the world, not reject it. In retrospect, I hated Holden because I wanted to be the teenager who jumped off the conveyor belt between adolescence and adulthood and indulged in a self-care weekend in New York City where maybe, just maybe, I might find myself too. So when, in the late ‘00s as we Millennials were leaving high school entering college, we watched our only slightly-older and equally-rule-following peers move back into their parents’ basements after completing fancy graduate degrees in Finance or English Lit, career-less and sexless and staring down the barrel of a quarter-century worth of student loan payments, Holden couldn’t have possibly spoken to us.

Holden was a mirror, not a window. In the 11th grade, what I wanted was a window that opened out.

The appeal of the alienated and disillusioned teenager only comes after you’ve left those years behind yourself — which might be why Salinger didn’t write The Catcher in the Rye for adolescent readers to begin with. It has always been a story for adults.

The Catcher in the Rye by J.D. Salinger, $8, Amazon