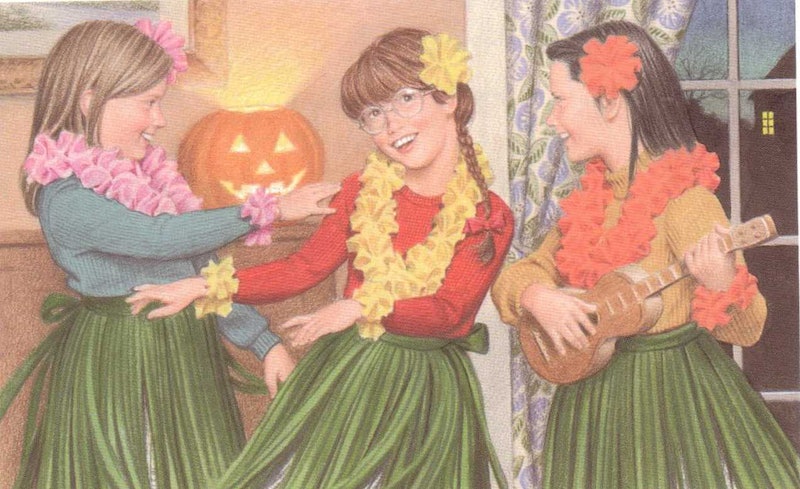 A few weeks ago, my elementary school librarian was sorting through old books when they came across a copy of the American Girl book Changes for Molly that had my name and birthday inscribed on the inside cover. On my seventh birthday, it had been my "birthday book" — a program in which parents could buy a book for the school library on behalf of their child's birthday. Since I'm still in touch with one of the teachers at the school, she sent it to me in the mail.

I slid the book out of its envelope, and was hit suddenly with a wave of nostalgia. It was like my childhood had sprung back up around me. There was something inherently comforting about the clean, white cover, with Molly McIntire from 1944, in a bright yellow raincoat and red galoshes, beaming up at me. Even the weight of the book in my hand felt distinctly familiar. And even now, as a fully grown adult who spends her day surrounded by books, it was thrilling to see my name and birthday inscribed on the inside cover. This was a book for me.

Like many young girls growing up in the '90s, I was obsessed with American Girl. I had two dolls — a Molly doll and a Josefina doll. I adored Josefina, but the Molly doll and I shared a special bond. Molly looked almost exactly like me, with long brown hair and glasses, which as a kid was a Big Deal.

I used to cart my Molly doll around with me everywhere. When I was seven, my earring ripped through the cartilage of my earlobe, leaving my ear in two pieces (the kind of small disaster that could be in an American Girl book, to be honest), and I distinctly remember lying on the doctor's table, clutching Molly in fear as the doctor explained to me that when she was done, my ear was going to look round and whole again "just like Molly's."

And I would, of course, devour the books over and over as the years passed. From Felicity's adventures in the Revolutionary War to Julie's groovy life in 1970s San Francisco, every book was a fascinating dive into history. The American Girl characters were more than just dolls or the historical figures I would learn about in school. They were fully-fledged people with full lives and everyday problems, and they truly felt like my friends.

The American Girl books had been a staple in my young reading life. But do they hold up now?

The afternoon I received that unexpected package, I lay on my bed and opened up Changes for Molly for the first time in years. I read the book in one sitting, and quite honestly, the book was good. I got caught up in the story, rooting for Molly as she dealt with her father's absence and did everything she could to be Miss Victory in her community's Hurray for the USA production. When Molly's older sister gave her advice, I listened with Molly's ears, feeling comforted by her confidence and wisdom. When Molly got pneumonia and couldn't make it to the production, I felt my heart break right along with her. I couldn't stop turning the pages; I wanted to know what happened next, even though it was already somewhere in the back of my mind.

Reading this as an adult, I was struck by how, well, adult the themes of this book were. One moment that particularly stood out to me was a conversation between Molly and her mom about how her father was going to come home from war and be a changed man:

"I don't know," said Mom. "He has seen some very sad and terrible things during the war. War does change people. It doesn't just happen and then disappear, all forgiven and forgotten. War leaves scars on people, and not just the kind of scars you can see. But I think Dad will still be our same old Dad at heart. He'll still love us. We'll all have to get used to one another again. It may take some time. We're all older. We're all different. "

This is obviously a really tough subject to tackle at any age — after all, there are plenty of adult books out there about the trauma of war. But it's also a concept that still affects real girls today whose fathers are serving their country. I think people often make the mistake of thinking that books and entertainment for kids has to be simple and avoid the tough subjects. But kids are perceptive and curious. They can see and are affected by the awful things that happen in the world, so it's important that we give these conversations a place in literature, no matter what age-group the book is geared toward. Now as an adult, I could recognize that this book knew its readers were mature enough to handle tough topics.

Even though Molly's story takes place nearly 50 years before my birth, her concerns and problems all felt so relevant to me. In this book, Molly is worried that she hasn't accomplished anything, that her dad will come home and still see her as a "dumb kid." Many people my age (myself included) share this fear that we're not successful, that we haven't done enough, that we're never going to really grow up. After all, isn't that what ideas like "FOMO" and "adulting" are all about?

After reading Changes for Molly, I also found myself thinking a lot about the message of the American Girl books. Because I was able to see myself in Molly, I was able to empathize more with her history. The same goes for the other American Girl characters. Even though they lived decades and even centuries before us, the American Girl characters were girls just like us, and their stories had a lot to teach us. I think I recognized this more as an adult, but I'm sure it had a great effect on me as a kid, whether I was aware of it or not.

There's a well-known idea that literature, especially children's literature, should be like "mirrors and windows," meaning that you should be able to see yourself in characters and you should be able to look through the eyes of someone different from you. This experience of connecting to history through the American Girl books exemplifies that concept. It demonstrates why it is so important that we have diverse books — so that as many kids as possible are able to have that experience of seeing themselves in history.

Changes for Molly was my birthday book 18 years ago, which feels like a lifetime ago. Re-reading it now, as I'm just about to turn 25 (an age that feels so terrifyingly grown up) was a great reminder that the gap between childhood and adulthood really isn't really that large after all.