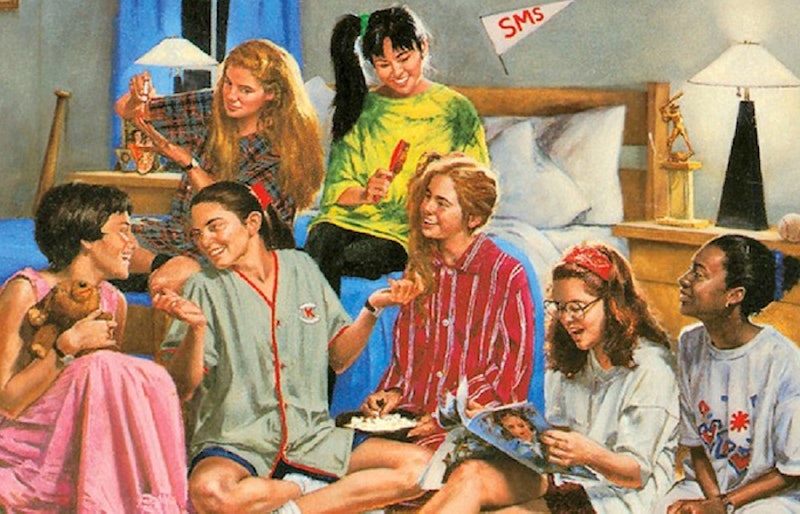 My first introduction to The Baby-Sitter's Club was when I was in the fourth grade. I was about 8 or 9 years old, and the first book, Kristy's Great Idea, had been out for over 10 years already. A co-worker of my mother's had two older daughters, both of whom had long outgrown the series. She carted (literally, carted, in one of those ubiquitous "old lady" shopping carts you probably only see in New York City because none of us have cars and we need to bring our groceries home somehow) over to my house one afternoon. It was filled with hundreds of BSC books; the main series and tons of Super Specials, those heftier books that brought the characters on summer vacations at the shore and trips to New York. From that moment forward I was a proud member of the club.

I devoured a book a day all through fourth and fifth grades, especially during the summer. I loved them so much, in fact, that I started pilfering them from the very small school library, definitely the most rebellious thing I had ever done. I can remember feeling as if there was nothing more fun or more sophisticated than being part of a baby-sitter's club. For me, the lives these girls led were so different and exotic from my own upbringing in Manhattan's Lower East Side. There were no after-school meet-ups with friends in their bedrooms, no playing in our neighbors backyards, or knowing every kid in the neighborhood well enough to babysit them. The quaintness of suburban life was like a whole other world to me, and I loved losing myself in a place like Stoneybrook, where nothing all that bad ever seemed to happen.

Of course, I eventually grew out of the books, too. I gave them to neighbors, donated them to libraries, moved on to other series. But I never really forgot the characters, and the way those books made me feel, how they became such a huge part of my childhood. And when, last year, I had the opportunity to meet Ann M. Martin, I felt the same giddy feelings bubbling up in me all over again. She was gracious and kind, letting me carry on and on about how much the books meant to me, sharing my library bandit escapades of 18 years prior, and generally fangirling as much as she's probably used to. Ever since then, I've had the urge to crack open my newly purchased, signed copy of the first book.

But I've been hesitant. I have not re-read a single one of the BSC books since I was a child. Unlike Harry Potter, which I started reading just before the fourth book came out in 2000, and have re-read pretty much every year since, The Baby-Sitter's Club had remained firmly entrenched in my childhood, preserved in amber the way so many nostalgic things are. But after another half a year, I decided it was time to finally go for it. And while I wouldn't say I was surprised by what I found, I was definitely relieved to say that the girls more than lived up to my fond memories of them.

The first thing that struck me upon cracking open the book was that it's funny. Kristy especially is full of wit and moxie, just how I remembered her. She's a little bit of a troublemaker, bossy and sarcastic and, though as an adult I have fancied myself a Claudia, with her artistic nature and her '90s chic ensembles, I have to admit that I am 100% a Kristy in Stacey's clothing — hey, I did grow up in NYC, too, after all. I took the subway to Coney Island all the time! But because the first book in the series is from Kristy's perspective, we get to see the good and the bad of the BSC's resident leader. Yes, I related to her desire to be in charge, to come up with all the good ideas. But I also saw myself in her fears, her inadequacies.

For one, Kristy's parents are divorced, her mother dating again. And her negative reactions to her mother's boyfriend still feel visceral to me, even now. Kristy mentions how her father is "kind of a jerk sometimes," having not called in over a year and forgotten her birthday. The fact that Ann M. Martin didn't shy away from the realities of divorce and of absentee parents was a balm for me, both then and now. In fact, her willingness to look into all the different ways our home lives can affect us (Mary Anne's super-strict widower father, Claudia's jealousy-inducing genius sister, Stacey's hidden illness...) is what makes the books still so beloved today.

And it wasn't only the issues and struggles that were painted realistically, but the triumphs, too. None of the characters ever questions the girls' idea to start their own business (which, in retrospect, is still a pretty damn good one), and they are supported by the community immediately. And maybe that, after all, is the series' biggest legacy: showing that a group of girls can come together, all with different personalities, different experiences and skill-sets, and make something good and smart and meaningful.

I don't think I really thought about that at the time, but reading it at 28 years old, I can't ignore it: The Baby-Sitter's Club was one of the first and most impactful times I was told that I could do anything I set my mind to. Not despite being a girl, but because of it, and besides it. I've carried that with me my whole life. And that's way cooler than Claudia's outfits could ever be.