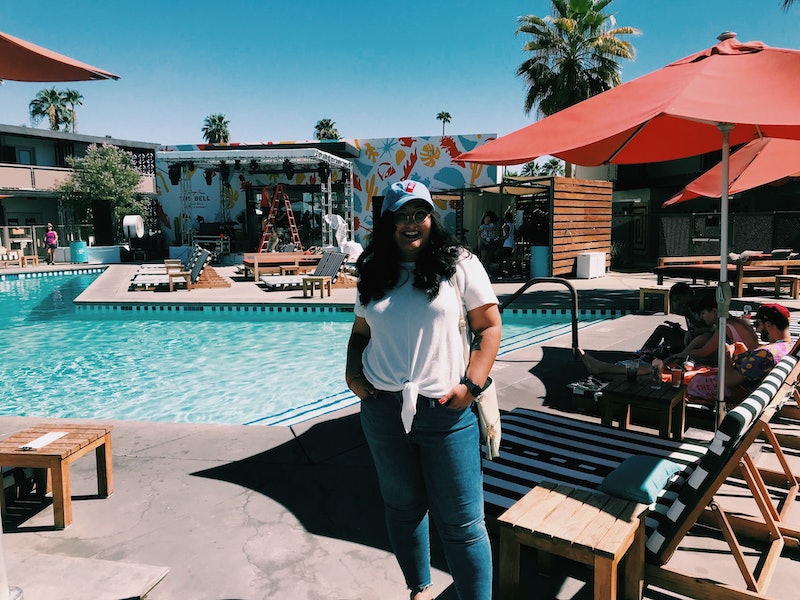 I needed water. It was 103 degrees in the middle of the desert, surrounded by rows of palm trees and red, rocky mountains as far as the eye could see, when suddenly a building came into view. Were my eyes deceiving me? Had the journey through Los Angeles traffic led my mind astray? I blinked to assure myself when my door opened and I heard a voice like that of an angel, saying, “Welcome to The Bell.” I arrived at my destination. Yes, I spent a night at The Bell: A Taco Bell Hotel & Resort and I can safely say I have “lived más.” An oasis — nay — a tacoasis — standing like a beacon of hope and cheesy goodness amidst the sand and blue sky.

You might be thinking, "But who among us has fallen asleep in a Taco Bell since college?" Which, same — until now. The resort, which sold out in a solid two minutes when reservations became available on June 27, was a unique, think-outside-the-bun, one weekend pop-up that opened on Aug. 9 to be "the biggest expression of the Taco Bell lifestyle to date," according to a press release from Taco Bell that Chief Global Brand Officer Marisa Thalberg provided to Bustle.

They were not kidding. Somehow, the fast-food-turned-lifestyle brand managed to capture the very essence of, say, a Nacho Cheese Doritos Locos Tacos Supreme and fuse it into a once-in-a-lifetime hotel experience from start to finish. Literally. At check-in, I was handed a room key and pool towel — both fashioned to look like hot sauce packets. That was only the beginning. There was hot sauce packet memorabilia everywhere: on pillows, baseball caps, pool floats, and more.

The hot sauce went beyond just merch, though. According to Executive Chef Rene Pisciotti, who oversees "menu innovation" at Taco Bell, each dish was inspired by a blend of Taco Bell classics fused with resort-style fare. "[These are] items that are non-negotiable when you're on vacation," said Pisciotti to a group of us at the hotel. Some of the items, like the Chicken Club Sandwich with Toasted Cheddar Chalupa Bread, which Pisciotti suggested may be coming to select Taco Bell restaurants soon. Others, like an avocado tostada (their spin on a classic avocado toast) topped with watermelon radishes and vegan (yes, vegan!) chicharrones, were exclusive to the resort pop-up. If that doesn't sound resort-style enough, the menu also featured a crudités with sides of tzatziki sauce and black bean hummus — both seasoned with *actual* Taco Bell seasonings. The coolest part? Pisciotti placed an emphasis on choosing local ingredients and vendors. Not only was it all ridiculously delicious and mouthwatering, it made me wonder: How exactly does one become an executive chef for Taco Bell, and are they hiring?

After a jam-packed day of swimming, sipping on cocktails while enjoying fresh DJ beats, and getting done up in the exclusive Taco Bell salon (where fans could get custom braids, Taco Bell-inspired manicures, and even a fade of the brand's bell logo), guests gathered poolside for a night of entertainment. They kicked off the night with a fire synchronized swimming performance by the Aqualillies. Yep, you read that right. There was synchronized swimming. By legit synchronized swimmers. In flame-patterned swimsuits. Trust me, I'm also having a hard time believing me. Of course, just when we felt they couldn't pump up the heat anymore, we were fed pool-side performances by artists like Fletcher and Tate Tucker. Once we had thoroughly seasoned the moment, guests returned to their rooms to find the best surprise yet: individually wrapped cookies shaped like tacos and hot sauce packets left on our pillows. The perfect treat for bedtime.

My absolute favorite part of the experience, however, was the next morning. As the sun rose, guests were invited to bend like a taco shell at morning yoga, which — yes, you guessed it — took place on hot sauce yoga mats. And of course, no resort experience is complete without ROOM SERVICE! I mean, is there anything more delightful sounding than curling up in bed after a morning of yoga to enjoy a build-your-own breakfast taco bar and "pancake delights" (which was a pancake-y twist on their classic Cinnabon Delights)? Pure bliss.

Without question, the weekend proved that Taco Bell has some of the most loyal and enthusiastic fans, like Danielle Cooper and Tanner Anderson, who were married just three weeks earlier at the Taco Bell Cantina in Las Vegas, and came to The Bell to celebrate their honeymoon. The couple, who donned wedding rings saying "Baja" and "Blast," started their love story at a local Taco Bell when a late-night food run turned into a first date. So, naturally, no honeymoon would be complete without some Taco Bell, too. "[We] had to be here," said Cooper. Well, obvi.

While I might not have reached that level of fandom, my heart did break like a hard taco shell saying goodbye to The Bell: A Taco Bell Hotel & Resort — easily one of the most unique travel experiences of my life. Unfortunately for all of us, the pop-up only lasted for one weekend, from Aug. 9 to 12. While there's been no word yet on if we'll see it return, I'll *personally* be keeping my fingers crossed.