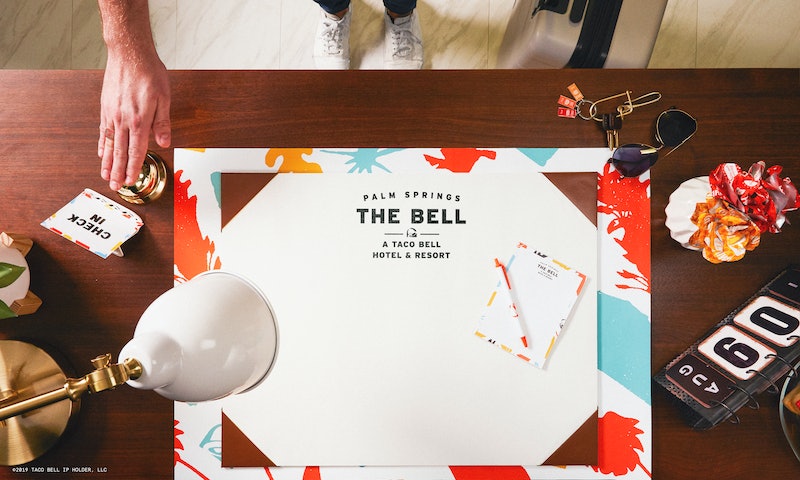 And today in Things I Never Thought I’d See, Ever, Not In A Million Years, No Way, we have this: Taco Bell is opening a hotel and resort in Palm Springs. Yes, you heard me correctly. No, this is not a joke. Officially called The Bell: A Taco Bell Hotel and Resort, the resort will fling open its doors for a limited time this summer, allowing taco lovers and burrito enthusiasts to immerse themselves in all things Taco Bell. Live mas, indeed.

Set to open on Aug. 9, with the reservation system becoming available to book your stay in June, The Bell positions itself as a vacation experience unlike any other — one that truly brings Taco Bell’s philosophy to life. “The Bell stands to be the biggest expression of the Taco Bell lifestyle to date,” said Taco Bell Chief Global Brand Officer Marisa Thalberg in a press release provided to Bustle. “It will be fun, colorful, flavorful and filled with more than what our fans might expect.” Continued Thalberg, “Just like some of our most sought-after food innovation, this hotel brings something entirely new for lucky fans to experience and enjoy."

One wonders whether those Taco Bell hot sauce packet pool floats we heard about recently were a subtle hint to this upcoming adventure.

It's not clear yet exactly where in Palm Springs the resort will be located; among the many, many questions I have about this whole thing, for example, is whether The Bell will be a sort of takeover of an existing resort or whether it’s actually getting built fresh from the ground up. For whatever it’s worth, though, the choice to use Palm Springs more generally as the location for such an endeavor makes a lot of sense. Well-known as a resort destination, Palm Springs has more hotels in it than any other city in the Coachella Valley — and with the city’s downtown area having undergone a revitalization in recent years, it’s the perfect spot not just for a new hotel, but for one as… uh… unique-sounding as The Bell.

To be perfectly honest, I’m not totally sure exactly what the experience of staying at The Bell will entail. The press release bestows upon us a number of major details while — likely intentionally — not communicating in any meaningful way what it will actually feel like to stay at a Taco Bell-themed resort. According to the press release, The Bell, which is “inspired by tacos and fueled by fans,” will “reimagine what a hotel stay can be.” Everything on-site — the rooms, the breakfasts, the cocktails you’ll be able to drink by the side of the no doubt picturesque pool — will seemingly be “infused with a Taco Bell twist,” although I couldn’t really tell you what that means. (I am hoping the pool itself is taco-shaped, though.)

There will also be a gift shop with “exclusive apparel”; an on-site salon where you can get “Taco Bell-inspired nail art, fades, and a braid bar”; and, of course, there will food. Lots of food. The menu offerings — both food and drink — will include both “beloved iconic flavors” as well as “new… surprises only available at the hotel.”

Maybe the enormity of the whole thing is interfering with my ability to envision it. Because, I mean… a Taco Bell resort. That is A Lot, both literally and metaphorically.

To be fair, though, Taco Bell is no stranger to thinking big. For example, the Taco Bell flagship location in Las Vegas is huge (because, I mean, it’s in Vegas), with a VIP lounge, DJ booth, boozy Freezes, and of course a merch store; heck, you can even get married at it if you want. Once, Taco Bell set up a little “slide-thru” window at the bottom of a popular sledding hill in Ontario, Canada as a promo for Cheetos Crunchwrap Sliders. In 2014, the company mailed 1,000 burner phones to fast food influencers which sent them on “secret missions” as a way to liven up the Taco Bell breakfast launch. And in 1996, the company even took out an in the New York Times claiming that they had bought the Liberty Bell. They hadn’t, of course; the ad ran on April Fool’s Day. But, as The Daily Meal noted in 2015, it tricked a huge number of people. “In an era before Twitter, lots of people took the company at their word and were very vocal about their outrage, prompting more than 650 print publications and 400 broadcast media outlets to pick up the story,” wrote Dan Myers.

Knowing the company’s creative advertising history, is it a surprise they’d eventually open a resort? Not so much, especially since it’s going to be a limited-time thing. It is, however, still extremely impressive, as far as publicity stunts go; consider my interest piqued.

Reservations for The Bell will open up in June for stays beginning in Aug. Note, though, that you have to be at least 18 years of age in order to book a stay. Good luck!

More like this
Why TikTok Is Obsessed With Caesar Salads Right Now
By Alexis Morillo
TikTok's Butter Board Might Be The New Cheese Plate
By Emma Carey
Behind The Hilarity Of The "POV: You Walk Into My Room" TikTok Trend
By Lexi Inks
8 Completely Unserious Tips To Make Your Cuffing Season A Success
By Ginny Hogan
Get Even More From Bustle — Sign Up For The Newsletter