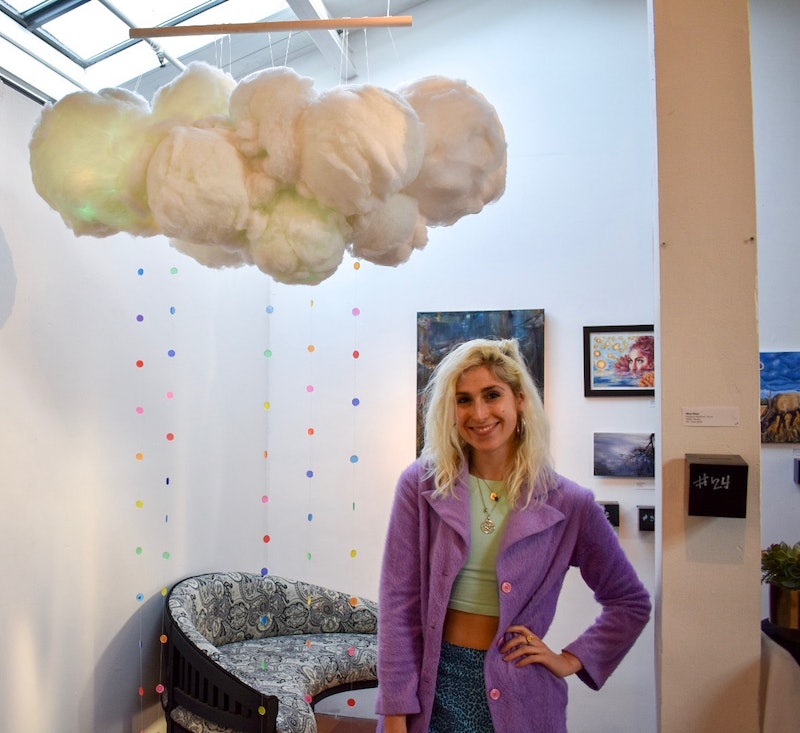 "Do we have any artists here?" I kept quiet, even though my first instinct was to shoot my hand up and offer to help my officemate design birthday party decorations. "You're not an artist, Nina," I thought. "Artists actually make things." I silently watched as a couple of my coworkers volunteered instead.

At the time, almost no one at my full-time job knew that art, music, and writing used to be a big part of my life. But I had never become too skilled at any of them. And in the years since college, I had grown to feel that if I wasn't proficient at something, there was no point in doing it — even if I enjoyed it or it helped me express myself. By that point, due to my perfectionism, I had quit almost all of those pursuits entirely.

It wasn't until years later, when I signed up for a basic drawing course at a local college, that I learned that the only real way to thrive, get good at things, and feel like a whole person didn't involve perfection. Instead, it required letting myself fail.

When I was a kid, I constantly created things: I wrote stories, illustrated them with elaborate drawings, and played music on my Casio keyboard. Doing these things came as easily and naturally as breathing. I didn't define myself by them, I didn't compare my skills to anyone else's; I just did them.

My propensity toward the arts continued through high school, where I was part of my school's art academy. I was a "dabbler," trying everything I could. I spent almost all my free time playing music, making visual art, and acting in and directing plays.

But after high school, I began to feel an immense pressure to choose a "path" while selecting a college major.

And with this pressure came a new, unfamiliar sense of self-consciousness. Suddenly, I was in a world where labels were important. In college, there were people whose whole lives were about being "painters" and "musicians" and "poets" and "actors"...and well, where did that leave me? As someone who dabbled in a lot of different mediums, meeting people who had devoted all their time and energy to one single area of the arts (and therefore had a lot more skill and experience in it than I did) made me feel like a fraud.

At the same time, the thought of actually putting in the work to get really good at something also felt completely overwhelming and impossible. Even though I was only 18, I was plagued with the notion that it was "too late" for me to learn anything new. Learning something new meant having to face a period of time where I was spending time and energy on something I wasn't good at yet — and the thought of "wasting" time doing that gave me anxiety.

Despite wanting to pursue art practice as my major in college, I decided to go with English, based mostly on the fact that I was too intimidated to study art. I ended up taking a few studio art classes as my electives anyway, and each time I did, I was overwhelmed with disappointment that I didn't have the courage to major in it. I felt at home in the classes, but told myself it was too late for me.

Once college was over, I began to truly feel the pressure of having to find a job, to market and define myself, instead of "just being a student" — and my self-consciousness and perfectionism increased. I essentially stopped doing anything that I wasn't already or immediately above-average at. Visual art went out the window, and music became a private hobby — I was never going to be good enough to be an artist for a living, so why put any energy toward it?

At 23, I got my first full-time job, working with a nonprofit for a cause that I'm super passionate about. I worked my ass off and got promoted nearly every year, moving up from an entry-level assistant to a manager overseeing a team.

I said yes to absolutely everything that my supervisor asked of me, even when I didn't have time. Though I felt beyond burnt out, brain fried, and depressed due to stress, the thought of saying "no" or setting a boundary felt terrifying — it would mean that I wasn't perfect.

During the nearly five years I spent at this job, I had zero energy to pursue art, writing or music. But the desire to do those things, the innate knowledge that they were a part of who I was, never left me. It was a gaping hole in my identity, which ached constantly.

I finally hit a breaking point with my job, and saw that leaving it behind completely more sense than trying to rebuild my relationship to it. I transitioned into doing part-time work and freelancing instead.

Why, I thought to myself, would I ever subject myself to doing something that I can't immediately do almost perfectly?

Maybe it was my approaching Saturn return. Maybe it was several years of therapy. Maybe it was the thrill of leaving my full-time job. Maybe it was that I finally had both the energy and the time in my schedule to start focusing on other things. Maybe all of these things combined — but I decided I absolutely had to start branching out, trying new things, and doing art again, or I'd regret it forever.

As terrified as I was to do anything that could involve risk or failure, I knew I needed to. So I decided to sign up for a basic drawing and composition class at a nearby community college.

The first day, I was terrified. Putting pen to paper made me feel completely naked and vulnerable. Even though our first assignments involved doing little more than scribbling abstract shapes and lines on a page, I found myself constantly comparing my work to everyone else's in the class, looking for artistic merit in everyone else's pieces and finding every possible flaw in my own. I came home from the first week of classes crying.

Why, I thought to myself, would I ever subject myself to doing something that I can't immediately do almost perfectly? It took every ounce of drive to not drop that class like a hot potato and burn all my pencils and charcoal in a giant, depressing bonfire of my own self-limitation.

Most classes, we'd spend our entire three hours quietly drawing a scene or object that was right in front of us using charcoal, graphite, or black ink.

A few weeks in, we went outside and drew a grove of trees on the campus.

At first, the giant, blank piece of newsprint paper may as well have been a loaded gun pointed at my forehead. I self-consciously looked around at the people next to me, trying to see their work, and stressing over the thought of them glancing over at mine.

But slowly, I worked at it. We spent three whole classes drawing the same grove of trees, and I noticed something strange: I started looking forward to going to class.

As someone with a relatively short attention span and an obvious hang-up when it came to doing art, it blew my mind that I was actually enjoying spending hours of my busy life drawing some random trees. Could this be... fun? And rewarding? It was taking me so long and the finished product didn't even look that good. So why did it feel so good?

I started learning to survive the low moments and embrace the improvements.

I was finding that I cared less and less about the skill, and more about how enjoyable drawing was. And my newfound "meditative flow" wasn't all I was gaining. Something amazing started happening as the weeks went on: I actually started improving at drawing. Like actually improving after putting in work. Wow, what a concept, right? There were a couple drawings where, objectively, mine was probably one of the worst in the class. It was embarrassing to me, yes, but there were also assignments where mine got the most praise. I started learning to survive the low moments and embrace the improvements.

Prior to this class, I thought if I couldn't do something immediately — like draw in a "realistic" style — I couldn't do it at all. But I quickly began to realize this was only true because I had never really spent more than 20 minutes or so on a drawing in my life.

I was starting to see how limiting this attitude was. Failing and trying again meant improving — and damn, improving was so much fun.

Yet another amazing thing happened to me during the course of this drawing class: I realized that the hours I spent painstakingly making those drawings were endlessly more valuable to me than the drawing themselves.

The drawings I made throughout that class aren't my style at all. I like weird, rainbow colorful, fantasy-inspired art that looks nothing like real life — so, like, this charcoal drawing of a crumpled paper bag, for example? I really don't care to look at it. And I definitely don't feel it expresses who I am as an artist or my vision of the world.

But this thing is priceless to me. I mean, I could care less about this piece of paper. But I care about the hours I spent focused on it, the work I put into getting better at something that I didn't start off great at.

The process of trying, failing, trying again, improving, enjoying something for the simple and pure sake of enjoying it impacted me in all areas of life. Suddenly, making art became a regular part of my life again. I still feel embarrassed and self-conscious, but not so much so that I don't let myself try. I became addicted to the thrill of improving and started trying other new things too, such as mixed media and printmaking.

My willingness to embrace failure and ditch perfectionism extended beyond my creative life, too. Six months after I took this drawing class, I started running. For someone like me, who loathes physical activity and feels incapable of learning new physical skills, this was a huge step, and it's improved both my physical and mental health.

I also took a leap and decided to pursue writing more seriously. Even after getting rejected from a position I'd initially applied for, I kept going until I found one I loved, and I continually fought to banish my inner critic, who was spewing self-doubt.

"It's about the journey, not the destination." I have heard variations of this seemingly-cheesy phrase about a million times over. While I used to understand this concept theoretically, I certainly didn't feel it. We're all taught to place so much value on having a final product, something to show off. Something that proves we have talent, proves that we worked hard — proves that we freaking exist. Pics or didn't happen, right?

Your comfort zone will truly kill you if you let it — and for so many years, my fear of not being "perfect" and failing at something kept me from making art, having healthy boundaries, trying new things, and pursuing my dreams. All I cared about was the result, and I didn't give two shits about the journey — but now I realize the journey is the part of growing that I value most.

So, "practice makes perfect," but fuck perfect. Practice — and the mistakes, embarrassments, and failures that come along with it — made me better.