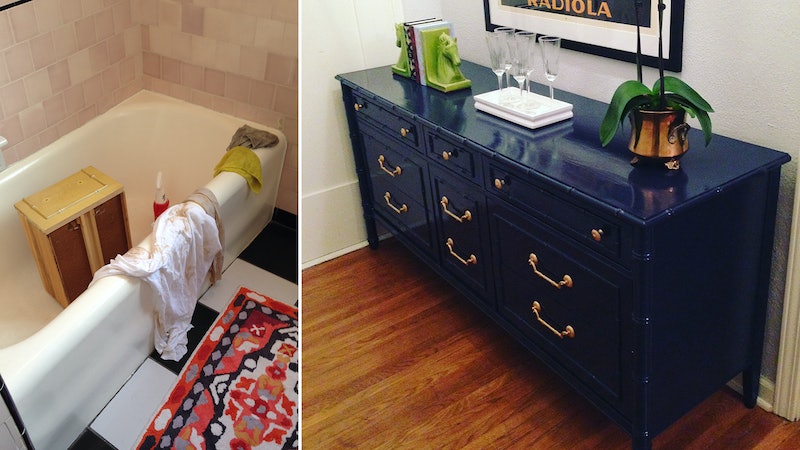 The dresser as a work-in-progress, on the left, and completed. Photos courtesy of Robin Benway.
By Robin Benway
Aug. 28, 2019

I first saw the dresser on Craigslist, a nine-drawer yellow monstrosity with faux bamboo trim and chipped, peeling sides. "In good condition!" the ad said, but the dresser's sagging middle looked like it was shrugging, as if it was saying, "I guess so? Maybe?"

I shouldn't have been looking for any furniture that day. I should have been working instead, writing the book that was due to my publisher in a matter of weeks and still barely existed in my head, much less on paper. It was about three teenage siblings, that much I knew, all of whom had been placed for adoption as babies and didn't know about one another until their own questions about family and belonging finally reunited them. The characters’ stories were as unknown to me as they were to each other, and as deadlines passed and ideas came and went, I was starting to realize that maybe this wasn't just a career roadblock. Maybe this was the end of the road.

I had written and published five books before this one. I had thought that my sixth book would come sailing easily along behind the others, a little literary regatta of sorts, but it did not. It would not. The last thing I needed was a creative distraction sitting in my living room.

I emailed the owner of the dresser. "I'll take it," I said.

It turned out that the shrugging dresser was not in good condition. It had been stored underneath several major roof leaks and seemed to have once been owned by someone who was fond of both cigarettes and incense, the furniture equivalent of a rebellious Catholic school kid sitting through weekly Mass. I had hired two movers to pick it up, sight unseen, and the time they loaded it into my apartment, I realized that part of one of the back legs had rotted off and half of the drawers wouldn't open. The movers looked at the dresser, then at me. "How much did you pay for this?" one of them asked me.

My father would have told me not to buy this dresser. He would have told me to go see it first, to negotiate the price. He had been an amateur carpenter and woodworker, the original Ron Swanson with his plastic goggles. He designed and whittled the wooden mantelpiece that hung over the fireplace of my childhood home. He was the man who made my grandmother’s twin thimble holders, a feat of craftsmanship that is now one of my most treasured possessions, something that they had both touched and loved, talismans of their intricate talents now that they were both gone.

I thought of him every time I deleted a word, a paragraph, or 100 pages with one quick click of the mouse.

I did most of my daily (or weekly, who’s counting?) writing at my dining room table next to these wood and glass thimble holders, thinking of both my grandmother’s quiet, easy inventiveness and knitted-eyebrow perfectionism and my dad’s ability to never make creativity look easy. I loved him for it, swears and sweat flying alongside the sawdust in his garage workshop. I thought of him every time I deleted a word, a paragraph, or 100 pages with one quick click of the mouse.

The day after the dresser made itself comfortable in my apartment, I went to the hardware store, looking up at shelves of paint cans and drop cloths. I knew I should have been home in front of my computer, trying to hammer out this book that refused to be pinned to the page, trying to give my characters the answers they needed. What I did instead was pick up a $20 paintbrush and then look critically at the paint like I knew what I was doing.

I could feel my father and grandmother behind me, both of them aghast at the idea of paying $20 for a paintbrush. They would have told me to get the less expensive one instead, the kind of cheap chip brush that leave bristles in the wet paint that you then have to pluck out with your fingernails. I bought the expensive brush, the one thing I could control as I started to feel my career slowly slip out of my hands.

Many well-meaning people will tell you, "Go after your dream! What's the worst that can happen?" Well, a lot, actually. You could get it and then lose it. Sometimes the fantasy of what could be is what keeps the breath moving through you as you sit in a hospital room, wondering if that's a good or bad beeping sound, the fluorescent lights turning your emotions blue and surreal, almost clinical. I had become a published writer three years after my father's death. The joy and elation of seeing my books in bookstores and libraries was now being tempered by the sobering realization that everyone and everything had an expiration date, including careers. The dream was dissipating and I was frightened of what would come next.

There are so many questions that I wish I could ask my father as an adult. Wandering through the aisles of that hardware store and feeling incredibly lost and out of place, I wished he was there to answer them: Why are there so many different kinds of nails? What am I doing with my life? How do you choose the right paint? Do I need a stud finder? Do you know that you have twin granddaughters? Do you know that one of them looks just like you? I worried that without him there to answer my questions, I would never be able to provide my characters with their own backstory, the knowledge of who they were.

Back home, I stared at the dresser and realized that dismantling, repairing, and painting a dresser in a one-bedroom apartment with no yard, balcony, or garage space was perhaps not my best plan. I pulled out all nine drawers and carried them into the bathroom, cleaning each one in the tub with Krud Kutter as rivers of nicotine ran down the drain. My rescue dog, Hudson, stood in the bathroom doorway, eyeing me warily and probably wondering if he would have been better off with that nice family from Temecula instead of this woman standing in her bathtub, furiously scrubbing a drawer with an old toothbrush.

The internet had no definitive answers on how to save my floundering career, but it sure knew about furniture restoration. I watched YouTube videos and learned what kind of primer to use on the top of the dresser, which was laminate and not wood and therefore required a different kind of base coat. Design blogs told me that Benjamin Moore's Old Navy was the best dark blue paint, and I'm both happy and relieved to report that they were right. I bought wood putty at the hardware store and learned how to rebuild a rotted dresser leg so that it could stand on its own. I discovered that a bar of soap could be used to grease the drawer runners. I rigged a contraption out of cardboard that let me spray paint the drawer pulls a bright brassy gold. (It collapsed 30 seconds later, but it still worked!) The $20 paintbrush turned out to be a wonderful investment and I highly recommend it.

Could my dad or grandmother have done it cheaper, faster, better? Without a doubt. But this was my problem to solve, not theirs.

When I finally sent the book to my publisher, I cried not with joy, but relief.

And while I scrubbed and painted and sprayed, I thought and wrote and answered questions for these three characters of mine. I spoke with adoptive parents, adopted children, foster parents and foster kids. I had phone calls with birth mothers and social workers, face-to-face meetings with people who didn't know me but shared their most intimate and familial stories anyway. When I finally sent the book to my publisher, I cried not with joy, but relief.

I found out I was a finalist for the National Book Award while sitting next to those thimbles, at that kitchen table where many words had been typed, down the hall from the dresser that now held linens my grandmother had hand-stitched for me when I was a child. The awards were held in November, my grandmother’s birthday month, and I put one of her thimbles in my sequined purse as a good luck charm. It said “November” on it, and when I took it out of the thimble case, I found a slip of paper tucked inside with her handwriting on it. “From Robin and Chris,” it read. My brother and me. My family, three generations, together again.

Far From the Tree was not the end of my career. There was no violent impact, no crash landing. It won the National Book Award for Young People's Literature, the PEN America Award, and was on the New York Times Bestseller list. It has prompted many emails from strangers, all of whom share with me questions about their own families, strangers who wonder about their past, parents and children who are no longer orbiting around them. I know that feeling well, that sense of loss and lack of tension. When I won the National Book Award, I stood on a stage in front of 700 strangers, my trembling knees hidden behind a podium, and talked about my family for the first time in a public forum. "My dad would be so proud," I told them, "but then he would say, 'You'd better get to work on that next book, kid.'"

So that's what I'm doing. The November thimble is back in the case where it belongs, looking down on me at my dining room table. The characters are still strangers to me but I'm excited to meet them. And true to form, there's also a used 5-drawer oak highboy dresser in the trunk of my car, patiently waiting, ready to be reinvented, made new, transformed.

Far From the Tree is available now.

More like this
Candice Brathwaite Is Over Using Her Own Life For Material
By Shahed Ezaydi
Watch The Trailer For Netflix’s Edgy New Comedy 'FAKES'
By Brad Witter
10 Must-Read New Books Out This Week
By K.W. Colyard
I've Read The Harry Potter Books 30+ Times & This Plot Hole Haunts Me
By Kelsey Stiegman
Get Even More From Bustle — Sign Up For The Newsletter