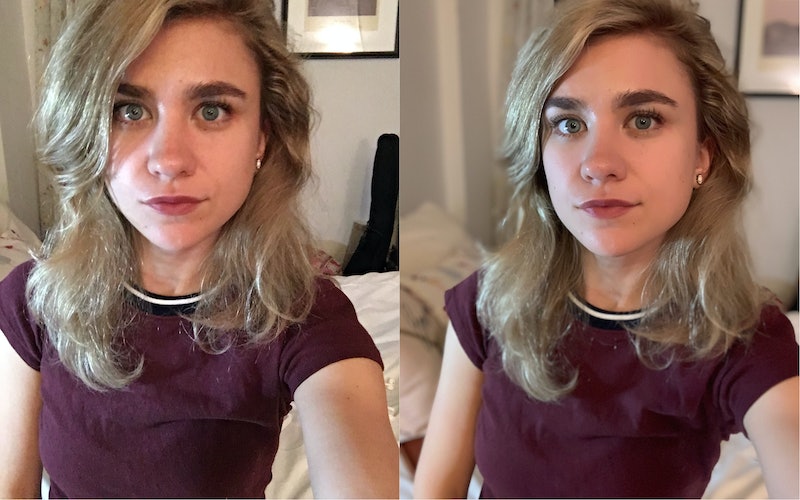 I know, I know. It's 2018, and the words "iPhone 6S" seem about as archaic as "Neopet". But even though the battery on my little 6S has reduced itself to the little engine that just can't EVEN, she is my baby and has never once judged me for all the #OOTD mirror pics and brunch 'grams clogging my storage. That being said, I am also an unrepentant, selfie-taking gremlin, so when Apple mentioned the improved features for selfie mode in the iPhone XS at last week's Keynote, I was more than a little curious to see what my human face would look like under a much more sophisticated lens. Luckily, I had the chance to test out the iPhone XS camera — and woof, you guys. Those improvements are no joke.

First, a bit about the iPhone XS camera: it uses smart HDR, capturing frames at multiple angles for a more resonant image. As Apple puts it: "New secondary frames, a faster sensor, and the powerful A12 Bionic chip bring more highlight and shadow detail to your photos." The pixels are also larger and deeper, and — perhaps most importantly — the camera has what Apple calls "Enhanced Portrait mode selfies," giving you the ability to change the depth of a front-facing photo's background after you take the picture.

In other words, this is an Instagram stan's dream.

But more remarkable is just how noticeably advanced the camera in the iPhone has become over the past three years. The iPhone 6S, which launched in September of 2015, is really not that old — but when you look at the selfies taken back-to-back on that lens versus the brand new one, it's basically like comparing a lightbulb to the sun. But photos, in this case, speak louder than words — so without any further ado, here are some back-to-back shots of all the selfies I unabashedly took in the last 24 hours, with the iPhone 6S version on the left, and the iPhone XS on the right.

I tried this spot first because this is where the majority of my selfies happen, most often when I have put on makeup, decided not to go out into the human world after all, and am still in dire need of attention. Usually if this happens at night, my selfies are doomed — I only have one lamp that works in my apartment, because I'm too lazy to buy a ladder to replace the bulbs on the ceiling — but the lens in the XS made it look like a ~mood~. And this, like all things designed into the new camera, was no accident.

In layman's terms, your chance at Instagram fame now no longer die with the sun each night. In fact, night just might be where the new Enhanced Selfie mode shines best — and in true "pics or it didn't happen" form, here's some more proof.

On the left is a woman in a green sweater. On the right is a Hallmark mystery movie heroine in a green sweater, about to go sleuth out a ghost and get back home in time for a meet-cute with her true love, and also dinner. Which is to say, the iPhone XS version of this shot is the clear winner — not just in the way it performs at night, but the way it captures shadow and depth (and inspires the creation of alter egos).

Part of this is the new low-light improvement, but the shadows, specifically, may have more to do with the Smart HDR: "Leveraging multiple technologies — like faster sensors, an enhanced ISP, and advanced algorithms — Smart HDR brings more highlight and shadow detail to your photos," according to Apple.

OK, so it photographs well in the dark — but will it withstand the most harrowing test of all? Enter ...

Ah, office bathrooms: the place where self-esteem plummets and dreams go to die. The bathroom situation is infamous here at Bustle dot com, where anyone trying to touch up their makeup for an event after work has to squint to try to locate the actual angles of their face as they get beaten down by light so harsh it feels like you've personally angered the ceiling.

Enter the iPhone XS, which makes the bathroom light look ... almost tolerable? The photo on the right is a delicious lie compared to what it actually looks like in there, but I will take it over the photo on the left any day. Part of its superiority in this department may have to do with the Facial Landmarking, which according to Apple's site, "allows iPhone to apply creative Portrait Lighting effects to your subject." Just replace the word "creative" with "life-saving," and you've got an accurate description of what the iPhone XS camera did for me in this toilet stall.

Outside In The Daylight

Context: it was raining and very cloudy, so this isn't direct sunlight. It is, however, an excellent example of the "enhanced bokeh effect," or the background depth, which you can see is blurrier in the photo on the right, making the subject (aka, moi) more of a focal point. It's also just a lot easier to take in without all the harsh light contrast captured in the 6S, and more representative of what the colors looked like to the naked eye.

My HAIR, guys! Look at my HAIR! OK, sorry, back to our regularly scheduled programming.

The comparison images really speak for themselves when it comes to the advancement of these lenses, which is probably for the best — like the average iPhone user, I don't have a lot of experience with photography, but can appreciate the difference between an okay lens and a great one. But I feel like I have to mention, as a human woman who is prone to existential selfie spirals where I worry about not being Insta model-esque and other nonsense that has nothing to do with my worth as a person, that the XS lens didn't just make me look better — it made me feel better. I noticed that the images didn't just differ in lighting, but in subtle differences in my expression. I trusted the lens to catch my light and do its thing, so I could relax and lean into my personality a little bit more while I was taking the shot, instead of posturing to get everything just right. I felt more free to be myself, and even get downright goofy on the shots that didn't make it into this article. And isn't self-expression what a good selfie is all about?

In conclusion: if you don't have the iPhone XS, XS Max, or the anticipated XR, do yourself a favor and go make friends with someone who does — your selfie game will thank you for it.

More like this
Here's How To Get Your iPhone To Update Automatically Forever
By Emma Carey
20 Smart Devices Under $35 That’ll Change The Entire Vibe Of Your Home
By Emma Carey
Why TikTok Is Flooded With Controversial Videos About "Pick Me Girls"
By Courtney Young
30 Clever Ways To Slide Into Your Crush's DMs
By Griffin Wynne, Carolyn Steber and Lexi Inks
Get Even More From Bustle — Sign Up For The Newsletter