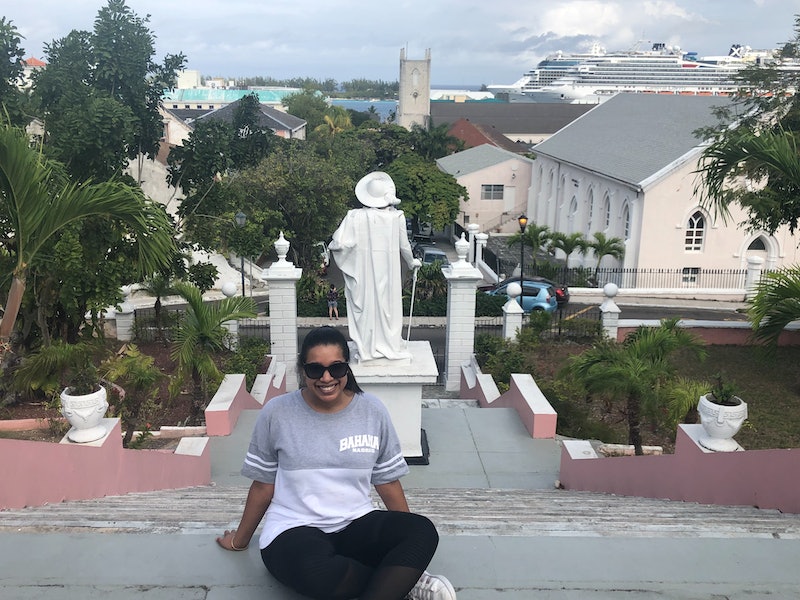 My great-grandmother died before I was born, but I still feel like I knew her. Like many oral histories of Black families, which are passed down and preserved while told around the dinner table, her story was one that the women in my family kept alive when I was growing up in Queens, New York. The family matriarch on my mother's side, my great-grandmother has always had a mythical quality to her — like a character from Black folklore.

Her name was Cecelia Florrie Thompson, and she was born in 1895 in the Bahamas, on the island of Eleuthera. I remember scouting out her name on the American Immigrant Wall of Honor at Ellis Island when I was 9 years old. My mother, who was named after my great-grandmother, took my picture in front of the wall, and reminded me that the family "stands on her shoulders." I took great pride in that, knowing that she sacrificed so much by leaving her home at just 17 years old, with the hope of becoming a teacher in New York. Sadly, that dream never came true. Upon her arrival in the United States, she moved to Harlem, and commuted every morning to midtown Manhattan to be chosen from a group of other women of color to clean the homes of the wealthy. Through her tireless work, she was able to provide her two daughters the opportunity they needed to build a fairly upper-middle class lifestyle, even though she herself wasn't around to enjoy much of it (she died in 1956, the year my mother was born).

I always knew that my great-grandmother lived in Nassau in the Bahamas, but I never fully understood what her life was like there growing up. There are certain family traditions we always had — peas and rice, sweet plantains, and poundcake could always be found on our dinner plates — but I never knew the cultural history behind them.

But after visiting the Bahamas this winter, and having the chance to learn more about the island far off the usual tourist's course, her journey feels so tangible to me. I was able to learn about the many traditions that I grew up with, that I never realized were so intrinsically Bahamian. I was able to piece together the parts of my culture that I had picked up from my family, with locals from the island who know the country's cultural history best. I was even able to have dinner with Willimae Salkey, an ambassador of the Bahamas' People-to-People Experience, who graciously opened her home and served a traditional Bahamian meal of stewed conch, peas and rice, sweet plantains and a sweet Bahamian ale called Kalik.

When you're a dinner guest in most American homes, initial conversation topics can tend to center around what you do professionally. But this was not the case at Salkey's dinner table. During the introductions portion of the meal, the first and only personal question I was asked was "my family name." I explained that my last name was Gomez, due to my dad's origins in Puerto Rico, but that my great-grandmother's maiden name was Thompson. And with just that little bit of information, I was told immediately that my family originated — and likely still mostly resides — on the Bahamian island of Eleuthera.

Eleuthera is the same island where NBA player Klay Thompson has family roots, and is also where rock royalty Lenny Kravitz — who is Bahamian, from his mother's side — calls home. During a conversation at a recent event here in NYC, Kravitz even asked me that same familiar question as the locals do: What's my family name? After I shared it with him, he smiled, saying, "Oh, you’re a Thompson. The Thompsons in my town are like the mayors." Like me, Kravitz also grew up in New York, and his earliest introduction to Bahamian culture was in the form of stories about his grandparents' sacrifices for his family. "Everything always went back to this hard-working Bahamian sensibility and pride and honor, so everything I do is standing on a foundation that was built by these Bahamian people," Kravitz told me. His love for the Bahamas is so strong, that he even lent his hit "Fly Away" to the island's new tourism campaign.

Kravitz and I also have a commonality in that we both didn't receive our introduction to Bahamian music until we visited the islands ourselves. The rake-and-scrape style of music — often heard during "Junkanoo," a Bahamian festival that takes place both the day after Christmas (Boxing Day) and New Year's Day — is Bahamian through and through, yet it's still relatively unknown around the world, especially compared with music from the Caribbean. "It’s sort of localized. People don’t really know about it unless you go to the Bahamas, because junkanoo and rake-and-scrape didn’t become a global thing like reggae from Jamaica or calypso from Trinidad," Kravitz explains.

I knew that my great grandmother loved to dance, but as a kid growing up in a Caribbean neighborhood in Queens, Bahamian music was never something I heard regularly. I knew about Trinidadian soca and the Indian-infused chutney genres, and adored Jamaican dancehall thanks to popular crossover acts like Sean Paul, Shabba Ranks, and Patra. But I knew it wasn't the music my great-grandmother listened to. It wasn't until I was in Nassau, visiting Sip Sip for lunch at Atlantis (for Crazy Rich Asians fans, Sip Sip makes its appearance in China Rich Girlfriend!), that I had my first introduction to rake-and-scrape, and I was so excited to have a Caribbean sound I could claim as my own.

It was lifechanging to get to visit the Bahamas and see my cultural background come to life firsthand. I returned to New York with a newfound appreciation for my Bahamian background — and the realization that my learnings would only enable me to better understand my great-grandma's life before her arrival in New York.

And then there's me. When my great-grandmother first boarded the ship to Ellis Island, I wonder if she ever thought her great-granddaughter would return to the Bahamas — and stay in the same hotel where the Rolling Stones recorded. I'm just a product of her own making, and it's an honor to further her legacy. I'm amazed at the appreciation I was able to gain after just one trip to the Bahamas, and I already have so many more questions that I'm eager to ask about her life at my next family gathering. I know there's still so much more to unpack and learn from — this family history that was waiting for me to discover all along.