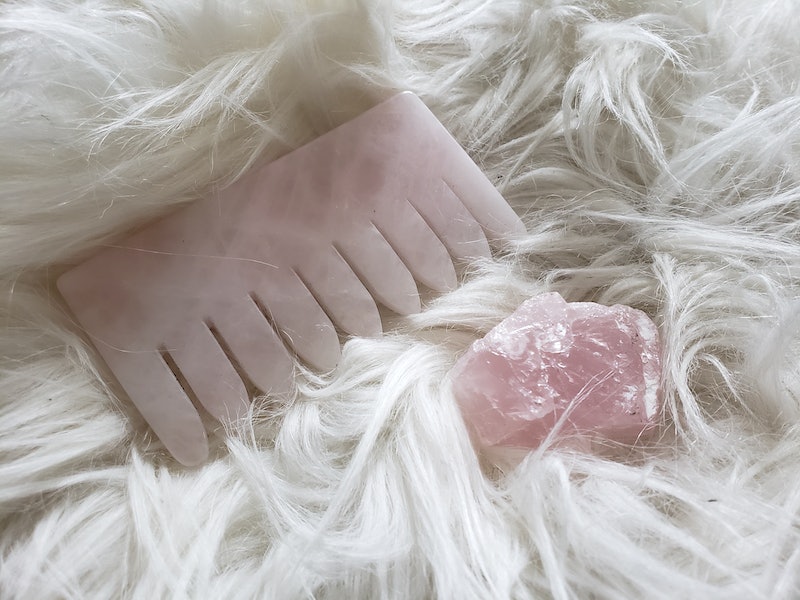 Combing your hair is a simple beauty ritual many women have in common. But what if that mundane practice of detangling strands could actually help improve your mental health? Swap out your plastic drugstore comb for a comb made of 100 percent rose quartz, and suddenly — crystal believers claim — you're calming your spirit and soothing stress with each stroke through your locks.

It sounds a bit unbelievable at best and downright wacky at worst. But some beauty brands are now selling crystal combs in hopes of intertwining spiritual healing with your average hair care. And I decided to give it a shot.

The concept might sound a little out there, but don’t fall into the trap of discounting alternative medicine based on Western medicine’s standards. There’s history to the theory behind Briogeo’s rose quartz comb worth considering.

Combing therapy using jade or bone combs has actually been used in the ancient Chinese practice of Tui Na for centuries. Combing is used in Tui Na as a form of massage to stimulate the scalp and encourage hair growth. But using different forms of stones for healing seems to be a more modern practice with roots in mysticism rather than ancient tradition.

What Briogeo is describing is technically called a chakra comb, according to Crownworks, a company that produces these types of combs. Chakra combs combine crystal healing, which uses various types of crystals for their supposed "healing properties," with established ancient Chinese principals, which aren't as reliant on a material's healing properties.

Simply put, manufacturers of chakra combs claim to it can clear negative energy from a user by cleansing the hair — and therefore the spirit — through the healing power of crystals, which has roots in several cultures and practices including Indian ceremony, Japanese reiki, and Wicca magick.

“Your hair is like a diary,” Andi Scarbrough, the founder of Crownworks, told Well + Good in 2017. Scarbrough claims that Crownworks is the originator of crystal combs, creating the product in 2007. “So ritually letting that [negative energy] go can be a profound practice."

According to Scarbrough, crystal combs have different healing properties depending on what substance they are made of. Rose quartz, in particular, is supposed to channel a sense of peace and healing for the user, clearing negativity and instilling a sense of self-confidence and inner calm. Depending on what sort of "healing" you may desire, then, you might pick a comb made of a different type of stone, like amethyst for wisdom or galaxite for protection. Briogeo, however, only offers the rose quartz variety.

Obviously, using a crystal comb requires some openness to mysticism and alternative forms of healing. I like crystals as much as the next casually witchy 20-something year old. Yes, I own several pretty rocks. Yes, I charge them by the moonlight and cleanse them with sage. But do I bank on their mystical properties? The jury is still out.

There have been few studies done on the impact of crystal healing. However, the most popular is a 2001 study to come out of Europe which found crystals to cause more of a "placebo effect" than actual healing. This study, in the Western scientific world, has largely casted crystals into the realm of pseudoscience.

To a person used to the theories and practices of Western medicine, the idea of crystals as a healing method can be easy to dismiss. But as someone who lives with major depression, anxiety and PTSD, I am often on the lookout for things that may soothe my spirit and uplift my mood, no matter how “wacky” they may seem. As many people can attest, when you get deep enough into an illness or disease, you tend to grasp for anything that might provide relief — even if it’s a touch avant garde. The mystical is that “avant garde” thing for me at this point in my life. And that affinity for the cleansing calm crystals promise is what drew me to the chakra comb.

But rose quartz combs don’t come cheap. While some smaller shops sell chakra combs for $30 to $80, Briogeo’s rose gold comb comes with a hefty $160 price tag. However, that's roughly what I currently pay for two works of insured treatment for my mental illnesses — and this comb should last indefinitely. While I didn't expect it would ever replace medication and therapy, I was willing to give the comb a go as a way to calm myself from time to time. Plus, it’s pretty aesthetically pleasing on my vanity.

I first tried to use the rose quartz comb on my dry hair after a day out in very windy New York City. That was a major mistake. The hard crystal comb snagged and pulled my tangled, over processed hair with very little “calming” involved. I quickly realized this device may look like a comb, but it isn’t meant to tame your strands.

I found the most success with the comb on freshly washed, wet hair that had been brushed prior to using the rose quartz contraption. While this method worked on my relatively straight hair, people with curly hair would probably struggle to comfortably use the comb. Running the comb through my strands for five to ten minutes did bring me a sense of calm, and it did feel really good on my scalp. And having this mini ritual did give me an excuse to slow down and take time out for myself, helping to quiet my mind with just me and a soft scalp massage. It was like the best part of a haircut without uncomfortably craning your neck into a porcelain sink.

The most notable moment in my 30-day trial came a few days after beginning to use the comb. I got a migraine after work and needed some relief. Frequent migraines are one of the ways my mental illnesses manifest, so I figured the comb could help clear up some of the bad vibes radiating in my head. I pulled out the comb and started raking it through my hair.

Yes, I did take some medication prior to using the stone device. But I also felt like the comb definitely did something to help ease my migraine more quickly than medicine alone. Above all, I think the weight of the comb and the gentle massage it provides when combing through your hair soothed my throbbing head. But regardless, the comb has become something I regularly turn to when experiencing a migraine, giving me a bit of relief in tandem with my normal treatments.

I most often used the comb at night after taking a shower, since the hard stone glided through my hair with more ease after a good condition.

So did using the comb make me feel like all my worries and stresses were suddenly nonexistent? No. But I didn’t expect it to. What it did do, however, is give me an excuse to take time out for myself each day to relax, whether for one minute or 10. Something about running a weighted comb through your hair is undeniably soothing, and the practice encourages you to pause and focus on that calming feeling.

As a woman who grew up low income and still struggles with feeling financially secure, I can’t in good conscious recommend a $160 comb as the absolute answer to whatever plagues you. However, I can guarantee Briogeo’s pricey rose quartz comb will not go unused in my house. Even after a monthlong trial, I find myself reaching for it when I need migraine relief or when I am craving a sense of calm. Plus, it looks great on my vanity and makes me feel very fancy, so that's something.

Above all, using the rose quartz comb has reminded me to not feel embarrassed about the things that might help you cope with life. While my house filled with sage smoke, moon-charged stones, and a chakra comb might make some people roll their eyes, these mystical things give me comfort. Surviving is nothing to be ashamed of — even if the things that help you survive are a little avant garde.