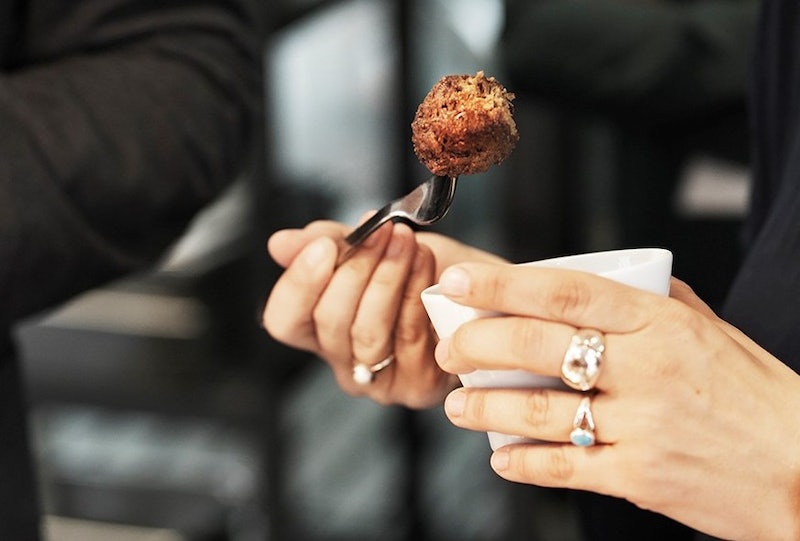 Even if you're never shopped at IKEA, you probably know about the store's food offerings. The IKEA Swedish meatball, offered at locations of the store around the world, is nothing short of iconic. A staple, if you will, that's been appealing to the tastebuds of IKEA-goers since 1979. However, for vegans, vegetarians, or people who simply don't like the dish's beef and pork ingredients, IKEA's classic KÖTTBULLAR meatball offering isn't an option. And though the company launched its KYCKLINGBULLAR and GRÖNSAKSBULLAR offerings — chicken and vegetarian meatballs, respectively — in 2015, and its SJÖRAPPORT salmon/cod meatballs in 2018, people who follow a fully plant-based diet haven't had an option for their dietary needs in the past. However, this is all primed to change very soon: As it announced in March 2019, IKEA developed a plant-based, vegan meatball for its menu that would look and taste like real meat — and earlier this year, I was lucky enough to be one of the first to try it.

With its new vegan Swedish meatballs made from plant-based ingredients, IKEA is promising that taste and appearance-wise, they will be like real, meat-filled meatballs.

I had the opportunity to try the new vegan meatballs at IKEA's headquarters — home of the first ever IKEA! — in Älmhult, Sweden in May 2019. I was deeply excited to try them, as personally, I'm not a big fan of meat. I find that I'm just more likely to enjoy my food if I know that it's made of plant-based ingredients versus animal ingredients, on a mental level. It's not even a taste thing, because I do like the taste of meat — I just don't like that it came from animals. Meat substitutes can be tasty, but I've found that they rarely act like a taste substitute. You always know when you're eating a veggie burger, you know?

The taste factor isn't the only reason these meatballs were created, however. According to Michael La Cour, the managing director at IKEA Food Services AB, creating these meatless meatballs — an endeavor that took over a year between ideation and the prototype — was important to IKEA not just on an inclusive dietary level, but because of the company's dedication to promoting environmentally-friendly products.

"The food industry in Europe stands for about 28 percent of the CO2 gas emissions by itself," La Cour told Bustle during the conference. "A large part of that comes from the cattle industry. Since IKEA is committed to the Paris Accord and to do what we can to transform the business from solely meat-based to more of a plant-based. And you know a little veggie ball or a meatless meatball might seem like a little thing, but when you sell a billion meatballs, [it's something]." According to La Cour, the hope is to transfer at least 20 percent of meatball sales to the new vegan option, in an effort to lower CO2 emissions in any way it can. "We launched the veggie hot dog — and we sell about 110 million hotdogs on a global basis — and there we see a great success. In most countries, somewhere between 10 and 20 percent [of sales for IKEA] are now the veggie-base. And that's a very good start."

The new meatballs are not in stores yet, as they're still in the testing and conceptualizing phase — unfortunately, it's not clear when they'll hit stores, though La Cour comments that IKEA is working with an "ambitious" timeline of getting the meatball to test with customers in early 2020.

According to IKEA, attendees of the two-day conference were among the first to try the current prototype of the new meatballs. They were presented in (sustainable, of course) paper bowls in pairs, along with peas, mashed potatoes, lingonberry jam, and topped with IKEA's famous ALLEMANSRÄTTEN cream sauce.

This was probably the thing I was most excited about trying during the conference, and I was admittedly so enthused once I found the meatball stand where they were being prepared and serviced that I ate my entire serving before taking more than one photo of it. That's a testament to how good it was, though; I had no problem inhaling it within seconds.

Texture-wise, they actually do resemble real meat quite closely. Much like real meat, they didn't fall apart when I bit into them, and they felt just as dense as a real meatball with beef and pork would. According to IKEA, the meatball is made from new plant-based alternative proteins.

I did find them to be delicious — extremely so. Again, I inhaled these things. I probably would have had about five more of them if it wouldn't have looked really, really over the top! But, for meatballs that are being touted as tasting like "real meat," I did find them to be missing something in their taste that a meatball made of beef and pork would have had. They tasted great with the cream sauce and I loved feeling like I was eating meat while knowing there was no actual meat in my dish — but it's important to note that these aren't the meatballs that you're going to be able to trick someone of Ron Swanson-level meat-lover into thinking is real meat. Similar to something like Beyond Burger, which mimics the consistency of a real burger patty while still being slightly different, IKEA's vegan meatballs didn't fool me into thinking I was eating anything else but a great vegan meatball.

But then again, I don't think they're supposed to fool anyone — and honestly, looking at them in that way is going against the reason they were created. The only thing that's ever going to taste like real meat is real meat — even dishes like these meatballs that come extremely close to being similar will never be the same. But, unlike real meat, these vegan meatballs aren't going to have as much of a negative impact of the environment when they're being produced — and that's important. They taste close enough to real meat that someone could easily enjoy it instead of a beef meatball and feel the same satisfaction while also doing something good for the environment as well.

Farmers will need to produce 70 percent more food by 2050 to feed the world's growing population, according to a 2011 United Nations Food and Agriculture Organization assessment — which, as The Guardian reports, means "[200 million more tons] of beef and other livestock" will be in demand. The FAO stated "sustainable intensification" is necessary to ensure any detrimental impact on the environment is avoided, but that the current rate of protein production won't meet the demands of the future, according to the report, titled "The State of the World's Land and Water Resources for Food and Agriculture." Between this and the fact that, also according to the FAO, global livestock contributes to 14.5 percent of all human-created greenhouse gas emissions, I think it's worth making a sustainable choice when the option exists. IKEA is making that easier by introducing something that still tastes great, but is also an alternative protein option that has the potential to lessen demand for other, already-existing forms of protein.

Considering the company's reach and fanbase, I personally hope that the introduction of the vegan meatball will help to prove that just because a food is "healthy" or "vegan" doesn't mean it tastes bad — and that it is possible to make good choices for the environment that happen to be tasty as well.